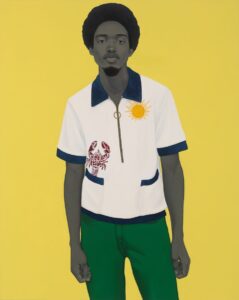 About:
Born in 1973 in Columbus, GA, and now based in Baltimore MD, Amy Sherald documents contemporary African-American experience in the United States through arresting, otherworldly portraits. Sherald subverts the medium of portraiture to tease out unexpected narratives, inviting viewers to engage in a more complex debate about accepted notions of race and representation, and to situate black heritage centrally in the story of American art.
Among her influences, Sherald has cited photographs that W.E.B. Du Bois compiled to be displayed at the Paris Exposition in 1900, depicting African-American men, women, and children in ways that countered discriminatory representations of the day. In particular, Sherald is drawn to the way in which African-American family photographs served as intimate, personal portraits, during a time when only white individuals or groups were being iconized in paintings. 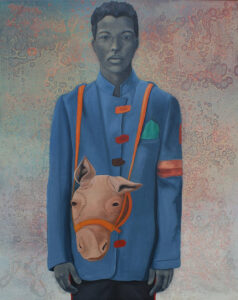 While her subjects are always African-American, Sherald renders their skin-tone exclusively in grisaille – an absence of color that directly challenges perceptions of black identity.’ Sherald offsets this against a vibrant palette: eye-popping clothes and ephemera float in tension against abstracted backgrounds. The depth created by the pastel backgrounds are not confined to any specific time or space, but seem to exist beyond the facts of recorded history and national borders.
She defines the subjects of her portraits simply as ephemera float in tension against abstracted background to American identity. The individuals in her paintings are deliberately posed, dramatically staged, and assertive in gaze. Their expressiveness, and the variations in their gestures, clothing, and emotional auras reinforce the complex multiplicities of African-American existence. But the persistent sense of privacy and mystery maintained in Sherald’s work requires viewers to ponder the thoughts and dreams of the black men and women she has depicted. 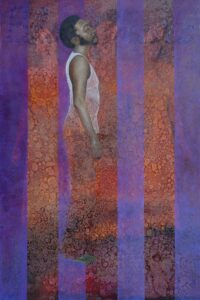 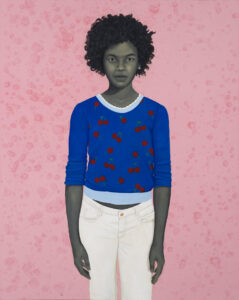 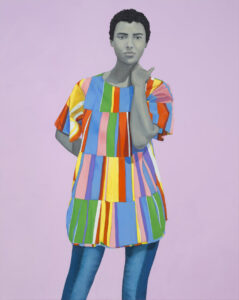 Sherald was the first woman and first African-American ever to receive first prize in the 2016 Outwin Boochever Portrait Competition from the National Portrait Gallery in Washington D.C.; in February 2018, the museum unveiled her portrait of former First Lady Michelle Obama. Sherald has also received the 2018 David C. Driskell Prize from the High Museum of Art in Atlanta GA. Alongside her painterly practice, Sherald has worked for almost two decades along-side socially committed creative initiatives, including teaching art in prisons and art projects with teenagers.