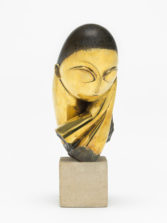 During the early 20th century many European artists were faced with the dichotomy between creating work for the then tastemakers and simultaneously recreating the idea of artistry at the time. By moving away from these norms artists such as Pablo Picasso, Amedeo Modigliani and Constantin Brancusi all began shifting their “efforts to move beyond the naturalism that had defined Western art since the Renaissance” (1). Although these artists had no understanding of the symbolic nature behind these “West and Central African sculptures they encountered, they instantly recognized the spiritual aspect of the composition and adapted these qualities” to their creations (2).

Xolani Shezi on the influence of African Art in Europe