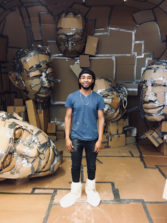 My aim is to bring more young people on Curacao in contact with art. I have had so many friends in high school who ended up in crime. I want to show them that there are other ways. Just as people in the Netherlands should be more aware of the past and how that past shaped the present, people on Curacao should be more aware of the fact that the future is in their own hands. Instead of fighting each other, we should be fighting together for a better world.

Manon Braat in conversation with Quentley Barbara from Curacao

END_OF_DOCUMENT_TOKEN_TO_BE_REPLACED 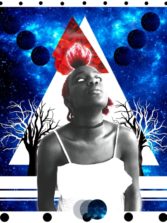 Arriving in the Netherlands was shocking. Because I realized immediately, something I oddly enough had never experienced before: that I am African. It was the first time I ever sat foot outside of South Africa and I had always just thought of myself as that kid that loved to read and draw and listen to pop music. That was my identity. When I arrived in the Netherlands, none of that mattered. People focused on my Africaness solely.

END_OF_DOCUMENT_TOKEN_TO_BE_REPLACED 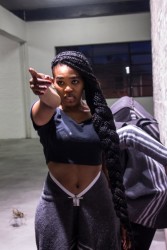 “As a young black female person I feel that my reality and history always call for me to transcend my experiences of being black in an anti-black and anti-woman world. The call for reconciliation in South Africa asks me to transcend my growing up in the township and the violence that comes with that.”

Manon Braat in conversation with the South-African artist Khanyisile Mbongwa.

END_OF_DOCUMENT_TOKEN_TO_BE_REPLACED

“The work refers to apartheid, an era that’s behind us. But it also speaks to the present that is very much impacted by apartheid. Everything that is now, the economy, black families living in townships, white people in suburban areas, is a result of the past. So the series also talks about current issues in South Africa, such as land. There have been quite a lot of debates around the redistribution of land. In the work I talk about my family who stayed on a farm for so many years but had no claim to it. And then they came to the city and moved to the townships because that’s just where black people had to live. That doesn’t make sense.”

END_OF_DOCUMENT_TOKEN_TO_BE_REPLACED

“I think that’s one of the most important things about the collection and now the institution. It’s from Africa, about Africa, by Africa. At least we get to write some of the history of our continent. As we know with colonialism and even now in a post colonial period, to a large extend the communication of our continent has been left in the hand of outsiders. And it would be nice that some of it is influenced by us!”

Says Mark Coetzee, director and chief curator of the future Zeitz Museum of Contemporary Art Africa in his interview with Manon Braat.