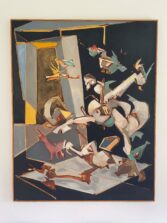 Telting’s paintings are topical and relevant in their own right. I have discussed them from the point of view of Telting’s commitment as a Black artist, and I have linked his work to the concept of Black Aesthetics. I take it that, once his work is juxtaposed to works from the Stedelijk Museum’s permanent collection, new relations, perspectives and cross-pollinations come to the surface, and will continue to do so.

END_OF_DOCUMENT_TOKEN_TO_BE_REPLACED

What took me by surprise back then, and what I tried to articulate in my answer, is that I was surprised that someone would be surprised that someone “with my background”, angry with and personally hurt by colonialism and slavery, could have an affectionate relationship with Dutch paintings from the 17th century. And yet, I feel at home with Pieter de Hooch’s The Country Cottage. I also feel at home at Paramaribo’s Waterkant. Both places pull me in with equal intensity, as if by teleportation. Both emotions: affection and anger towards two opposite phenomenons from one and the same historical period do not rule each other out, they coexist. Inside me there is no opposition. There is no true opposition.

Artist Dineke Blom tries to answer the question how an artist with a Surinamese background can have an affectionate relationship with Dutch art from the 17th century.