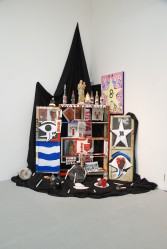 In a country like Suriname with a population of half a million people everybody knows each other. Because of the political nature of his work, Kurt feels inhibited. This self-consciousness is something he is letting go of, more and more. He used to think all the time about what his parents would say or think. “I think less and less each day about other people’s opinions about my work. I try not to think about my close environment. In a way the word ‘DADA’ is a sacred word and it enables me to feel unlimited freedom and space in which I can create.”

Kurt Nahar in an interview with Marieke Visser.