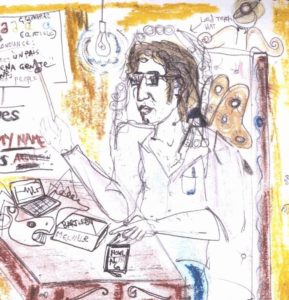 “The day I began to live and behave in a more nomadic way, I kept notebooks that departed from my more usual forms of creative activity. These notebooks ﬁlled with bestiaries, drawings that combined human and animal ﬁgures, with symbols from the religions I have encountered, and notes from songs: an interplay of my experiences, suffering, pleasures, memories, poems, stories and forces surrounding me as I went about travelling like a wayfarer, a Homo Viator. Restless travelling does not change how the artist’s primary concern lies with inner experience… Geography looks absurd in relation to art.” 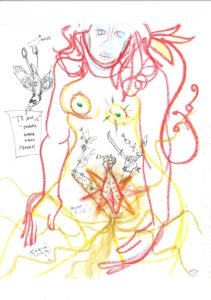 The drawing is from 2011, I made it for the Egyptian nude-blogger, teenage activist, Aliaah Maghda Elmahdy 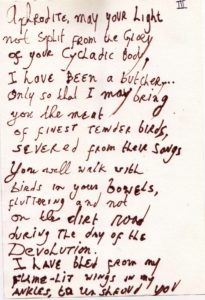 Aphrodite. The poem is a fragment, the last stanzas of a poem I wrote about Greece during the crisis. 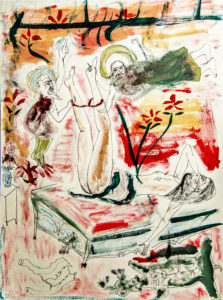 Is filled in the sequence of days after

with holy lilies, a dropper from god into her.

with the mind, narrowing and becoming pointed

that makes the thoughts disappear, (  mistakes—(female word, mis- ) do reappear—)

the mother’s brain sails off

you cannot speak of that

in this age, or be brazen–

and do duck before

has the same shape as the clouds, but darker,

and her mind is as far as the cumulus

pouring through the basins, as Columbus

was from India’s chin

the year of milk from heaven,

pouring through the cylinder of seraphic spring.

all lunar and never

and never again land(—man—you do sever, don’t you–) 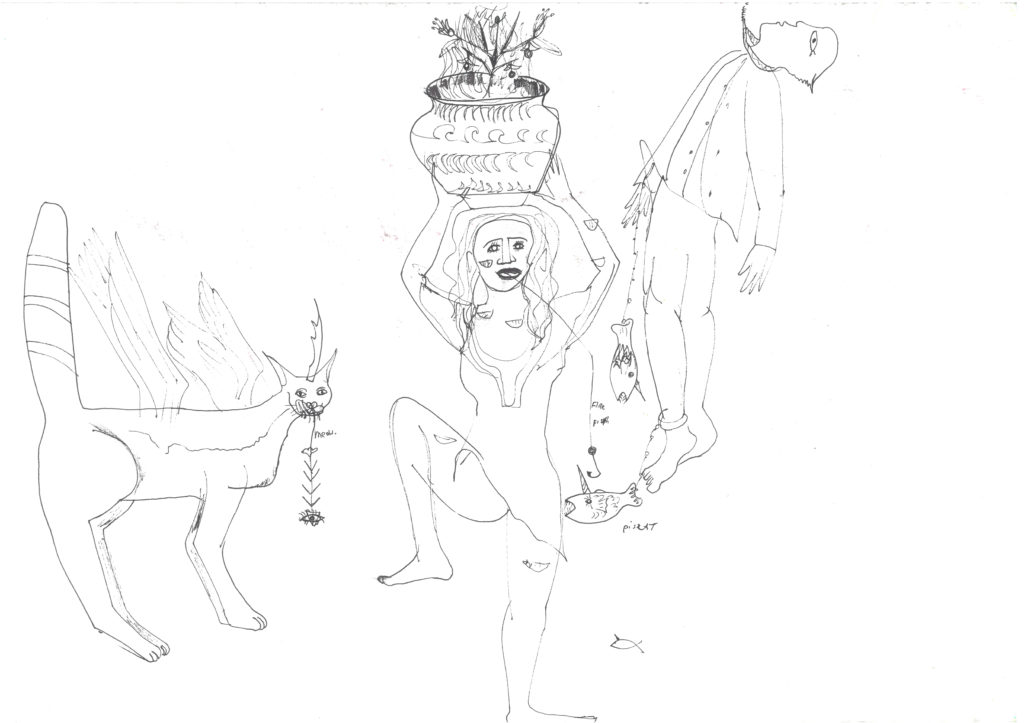 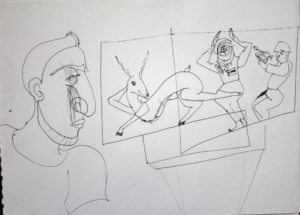 An adolescent from the Tunisian mountain village

of Regueb, looks on an outdoor movie-screen at his friends’ first short film, where they

reenact the dramas of the Palestinians. (A beautiful schoolgirl from the village, a gazelle, plays a victim of the Israelis

I first travelled to Tunisia in 2011, hoping I would become some sort

revolution in the 1930s (Albert Helman of Surinam was one such literary correspondent,

less known than George Orwell’s ”Homage to Catalonia”)–no such glory.

I visited a film festival upon the invitation of my friend, a Tunisian film-maker

from Sidi Bouzid. The festival took place in a rather impoverished, once forgotten town

of Regueb in the mountain outside Sidi Bouzid city, where the famous revolts started.

The international festival was supported entirely by the townspeople, many of them

jobless, as well as the artists who visited–musicians, theatre groups, film-makers and visual artists.

Posters with the face of Mohammed Bouazzizzi hung everywhere, even outside bullet-holed buildings: the fruit-seller’s

public act of suicide had catalyzed the revolution.

At an open-air, nocturnal screening, cinders from bonfires flew and met with fireflies over the heads of the audience,

as the jury announced the award for ”first short film” to a boy of 15 from the village. Men in denim stood up

howling and applauding in the make-shift auditorium for the boy who had directed a film about Palestine and Israel with his friends.

The adolescent camera-man, who accepted the award on behalf of his friends and Palestine

had never visited Palestine or Israel. Later he told me how his brother, a militant

activist, had hidden in a garden, pursued by the Tunisian military police and snipers who wanted to execute him

In the film he recites a long poem to music, wearing a kaffiyeh: he is a Palestinian,

running from Israelis, who shoot dead an Arab woman with powdered-grey wig,

as she sits making dresses on a Singer sewing machine.

It all seemed a re-telling, with a poem voice-over, of what had happened

to them in Tunisia under the dictatorship, but they changed Tunisia to the name

of a more relevant country, Palestine: a holy land, just as arid, with as many olive trees

as their fields. I found it at once mesmerizing and ironic: how the moment a talented youth

of this village had the means to express himself, instead of telling the story of his and brother’s lives

in Regueb, he would make another homage to the Palestinian struggle as if that were closer: to towel

and wrap the tale of him and his family in an arid unknown town in the Atlas, with Palestinian kaffiyeh

scarves and flags, covering the faces that utter poems with ravaged doves and daughters in them.

Perhaps that seemed safer: more distant, more in tune with the kind of expression of discontent that

was tolerated under the African regime they had so recently toppled. 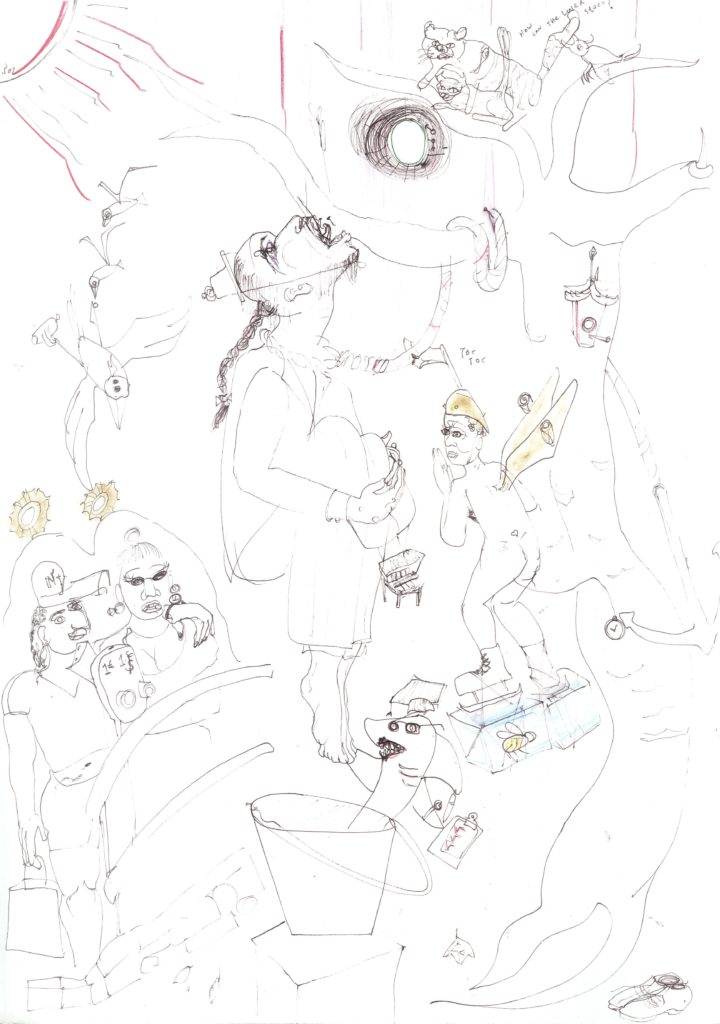 A hanging man does not plummet

The dog hanging from a hook in its mouth, in this way, often has appeared in my drawings.
Years after I started to draw these, a poet I knew who had read my poems and
knew I was born and raised on Aruba, told me I should read the poet St-John Perse from Guadeloupe, because of his imagery and Middle Eastern curiosity, and he recited a verse to me about how fishermen from Guadeloupe use a dog’s corpse as the best shark-bait.
I had seen sharks on display by beaches, on the piers and marinas; once, a proud boy of perhaps thirteen who harpooned a tiger-shark standing in the shade of his catch, in his cap and sullied t-shirt, the shark the size of a boy’s torso, revolving slightly on the rusted hook in the wind before it would be placed on a scale before tourists and an admiring father and uncles; I saw the confidence of the kid-fisherman with his belly jutted forward, I could make no contact with him, even though we both wore long hair: a superior calm reigned in his soft face, after having won an initiation that I had not won in the bright waters”
Years later, I walked along the Malecón in Cuba, Greater Antille, on my way home and aglow from after a meeting with a cajón playing poet friend, who everyone rumoured to be one of the sons of Guevara and his out-of-wedlock lovers–a child of undersecretaries of the Gods, and a mischievous man.  I crossed the road between slow fleets of 1940s American ice-cream-coloured cars, and came up to the low wall, wanting to gaze at the sea, when I saw a headless dog there, strewn on warm rocks: I assumed there, stupidly perhaps, that it was an offering made to the beings worshipped in the Yoruba religion, to one of those many under-secretaries of the supreme being Obatalá.
I covered my face with my shirt when the curtain of salted canine death-smell hit me, feeling like a shark punched in its sensitive snout, I wondered what magic rite this was– in the awful bright blank sun shrouding the Malecón boulevard and balustrades, whiter than the impeccably clean white garments of those proud Baoalao-priest who strut the sidewalks authoritatively in their newfound religious freedoms the State at long-last conceded.
It had not occurred to me then, hearing the lunch-choir of flies, that this was no religious offering to any celestial being above or beyond; that this was secular, pragmatic, used bait  (though who the hell was I, having not harpooned or boxed with a shark before, to deny it’s being some kind of sub-god in the chilly water, as some people surely experience them in that way– god-like, even on a harpoon.) 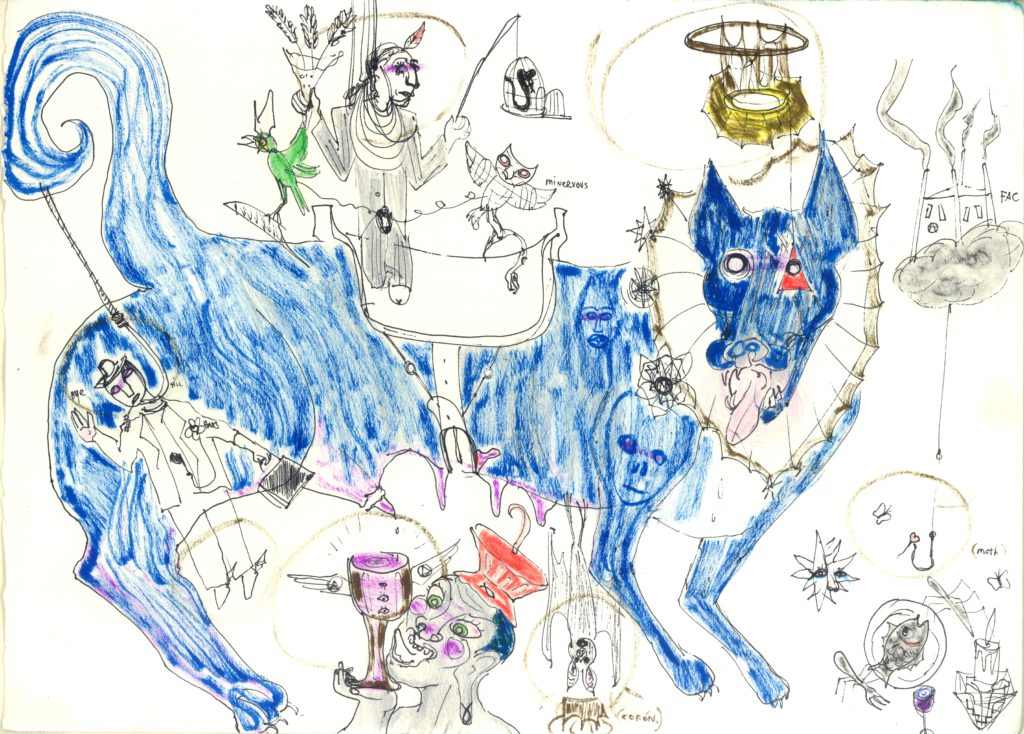