Hasted Kraeutler is pleased to announce our inaugural exhibition of work by Awol Erizku, beginning June 14 and running through July 20, 2012.

Awol Erizku’s photographs reference classical art works to include models of color in order to emphasize, and draw attention to the lack of racial diversity represented in art history. Erizku creates images such as, Girl with a Bamboo Earring, 2009 in which he replaces Johannes Vermeer’s Dutch sitter, in Girl with a Pearl Earring (c. 1665) with a contemporary African-American woman. Growing up in the Bronx, “the negativity that went on in my community made me want to paint a positive image of the people who might not necessarily fit the stereotype. Going to a school that didn’t necessarily reflect the kind of people I lived around and grew up with also made me want to make images that best represented the people I saw on a day to day basis but weren’t glorified in pop culture.”

Erizku’s portraits are of non-professional models, who he finds on the subway, on the street, and on the internet by way of blogs and Facebook. “The models I choose to work with are not professional models but possess an undeniable, striking beauty.” Often his subjects inspire him to create a work such as in Lady With a Pitbull, 2009 where the model photographed with her own dog inspired him to recreate Leonardo da Vinci’s Lady with Ermine (c. 1489–1490).

Born in Ethiopia in 1988, Awol Erizku is a Cooper Union School of Art alumni, photographer, filmmaker, and sculptor. His exhibition debut in New York City was in the critically acclaimed exhibition, Art• which placed his work alongside Duane Michals, Roe Ethridge, Richard Prince, and Roy Lichtenstein at the Flag Foundation in 2011.

For press inquiries or for further information, please contact Hasted Kraeutler at 212-627-0006 or email info@hastedkraeutler.com.

Working seamlessly across a wide range of mediums including photography, sculpture, and video installation, Awol Erizku (b. 1988) references and remixes disparate artistic movements and traditions, from the photorealist still lives of Dutch Masters to spare, Minimalist constructions, giving them distinctly 21st century updates. Throughout all of his work, the Ethiopia-born, Bronx-based artist strives to mollify what he perceives as a marked absence of people of color throughout the canon of art history, integrating contemporary fabrics, styles, and symbols with a provocatively allusive sensibility and aesthetic.

Erizku’s stark, masterfully lit photographs reference classical artworks, while replacing their protagonists with models of color in order to emphasize and draw attention to the lack of racial diversity throughout the canon of art history. In his striking image Girl with a Bamboo Earring, 2009, for example, Johannes Vermeer’s Dutch sitter for Girl with a Pearl Earring (ca. 1665) has been substituted by a contemporary African-American woman, who gazes out of the frame with confidence and grace. For his most recent body of work, New Flower, Erizku traveled to four different cities in Ethiopia on the Alice Kimball English Traveling Fellowship from Yale University. Working with local sex workers, he created a strikingly powerful body of photographs that reinterpret the controversial pose of Manet’s Olympia.

Just as the formal elements of Erizku’s images resist the limited parameters of historical portrait photography, their moods and psychological presences are equally distinct, illuminating the individual characteristics and personal style of every subject. To that end, he doesn’t employ models for hire, instead choosing his subjects from the world around him—passersby on the street, a man or women sitting near him in the subway car. It’s an intuitive process, often inspired by an energy he finds appealing, a “striking, undeniable beauty,” or a feature he experiences as expressive.

His interest in engaging art history while subjecting it to critical scrutiny extends to his work in other mediums, as well. A new work titled Oh what a feeling, Fuck it I want a Trillion cleverly alludes to Donald Judd’s famed series of “Stacks,” in which painted iron boxes are installed vertically on a wall, projecting nearly three feet and climbing like rungs of a ladder from floor to ceiling. In Erizku’s sculpture, those sleek, smooth, minimalist objects have been replaced with basketball hoops, a symbol of urban youth culture and a reference to his childhood on the courts of New York City.

Born in Ethiopia, Awol Erizku received his B.F.A. From The Cooper Union in 2010, and his M.F.A from Yale in 2014. His exhibition debut in New York City was in the critically acclaimed exhibition, Art•, which placed his work alongside Duane Michals, Roe Ethridge, Richard Prince, and Roy Lichtenstein at The FLAG Art Foundation in 2011.

Awol Erizku  is represented exclusively by Hasted Kraeutler in the United States. 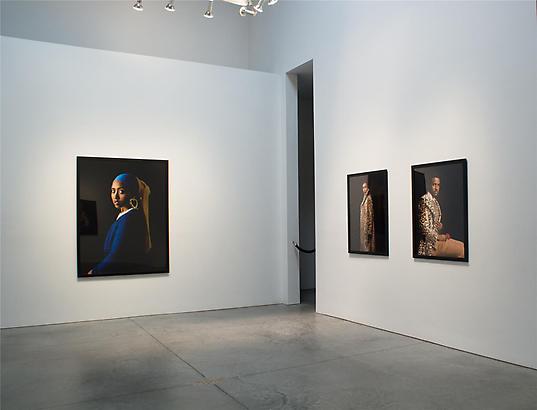