Blank Projects: Igshaan Adams and others in Group show 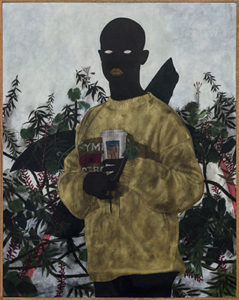 Blank Projects is an institution that I been aware of for a number of years now, and the eclectic and experimental nature of the artist they show has been consistent and imbued with a measure of a collective aesthetic. Blank Projects is a gallery that extends African artists beyond what is political, into the realm of aesthetic and the theoretical.

Temba Tsotsi on an exhibition at Blank Projects in Cape Town

Igshaan Adams and others in group show

Blank Projects summer show ran at their recently opened space on Lewin Street in Woodstock, Cape Town. The show features works that fit the eclectic character of the gallery’s resident artists. Works that are experimental, instillation based multimedia, minimalist and Cinga Samson opaque traditional works.
Blank Projects is an institution that I ‘ve been aware of for a number of years now, and the eclectic and experimental nature of the artist they show has been consistent and imbued with a measure of a collective aesthetic. Blank Projects is a gallery that extends African artists beyond what is political, into the realm of aesthetic and the theoretical. 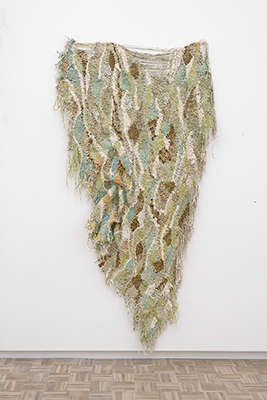 Included in the exhibition are artist Igshaan Adams’ tapestries. A recent winner of the Standard Bank Artist of the Year Award, with a piece titled Dunya or The World (2017), continues his elegant and languid tapestries that he states are about his establishing a relationship with Islam and God through his family. This piece is an extension of his composite strategy, where connotations of excess and amalgamation coalesce to articulate a piece where disorder and order inform each other. Dunya is a bigger piece in my encounter with this strategy; it is also imbued with more structure. What is haphazard about it is peripheral in that it is imbued with structure. It also displayed in that loose manner, to emphasize the spontaneity and structure that is operational in the piece’s title.
Adams’ works are products of experimentation without being guided by patterns and machines. Their sense of the existential becomes established in their propensity to be operated as recycled materials that symbolically represent the artist recycling of emotions. 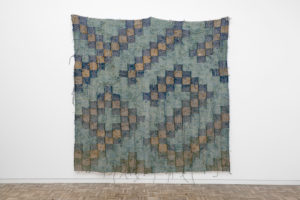 Adam’s works are imbued with serene and quiet energy the sentiments of tapestries are imbued with. The same cumbersome and tranquil energy permeates these two pieces. The open fabric orientated piece Akbar (2017) with its eclectic and excess nature resonates with a measure of resolution and form. It is square and imbued with the freedom of an unfinished fabric. This way the artist can demonstrate that each piece does not emanate from some formula in his studio, rather it is the spontaneity and explorations that inform each piece in an attempt to represent social organic interactions. The works are poetic to the extent that the artist does not usurp these exercises in catharsis, rather he leaves himself out and lets the symbiotic relationship between affect and material speak for itself.
In a solo exhibition with the gallery in 2016. The works were an amalgamation of discarded materials in the artist studio, comprised of beads, strings and steel-poles. Eccentric and eclectic the works experimented with formlessness to discourse the artist’s emotional and intellectual processes, as memory and inspiration for creativity. The works are spontaneous to the extent that they do not examine the measure with which excesses do not necessarily mean exhaustion, nor does it connote a measure of gluttony.
With the works that he has included in this exhibition, the same energy and effect resonates with these two works. Dunya is a piece whose measure of formlessness speaks to how exhaustion and excesses are mutually exclusive without the implications of meaning that art enables. In the sense that without the deliberate disorienting finishing impact that Adam’s works permeate with, the pieces would have an unfinished craft quality about them. Rather being conscious of the artist’s background one is able to discern this value of excess and its connotations for preservation of meaning and establish a symbiotic co-operation between material and meaning. 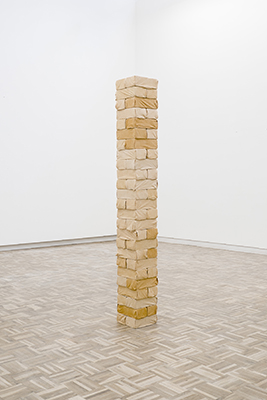 Also included in the exhibition is artist Bronwyn Katz with a piece that demonstrates her versatility with the piece she incorporated in the exhibition, extending her wall instillations to the floor. Stacking bricks covered in soil stained clothe, this piece is a move away from the abstract topographical bed springs. The sentiment and affect regarding space permeates this structure, in a way Katz discourse how linear conceptions of spaces apply both in what is haphazard and what is linear.
With this exhibition Blank Projects seems to be a gallery that is interested in how art interacts with space, and how space is able to emancipate the art. This is reflected in the curatorial choices in this exhibition where floor instillation and wall instillation have a symbiotic relationship. 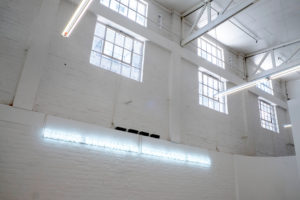 This is characterized in James Webb’s work a light instillation titled There Is A Light That Never Goes Out (isiXhosa version). Webb is an artist who works with sound instillation and its overarching implications with how it builds a relationship with space. The speakers in this piece are strategically placed on a window frame. The intention is to draw attention to the light sculptor, this way Webb demonstrate how his work can be imbued with what is multi-dimensional even when it is visual. 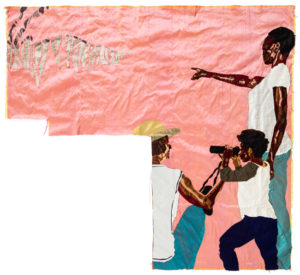 Billie Zangewa’s piece titled Return to Paradise is a silk tapestry comprised of a Black family out on a past time traditionally characterized with white tourist. The socio-political implications of the work become pronounced by how its aesthetic goals are realized in the operation of color and the relationship it builds with other works from a curatorial perspective. The brown that characterizes the family and the peach pink of the fabric’s background combine to emphasize a work that it about an emancipated identity. The fact that the natural environment has been cut out of the fabric, is not just aesthetic choice, it is also a minimalist strategy that seeks to emphasize how the characters in the piece are identified, and how this can be something is external to them therefore imposed on them. 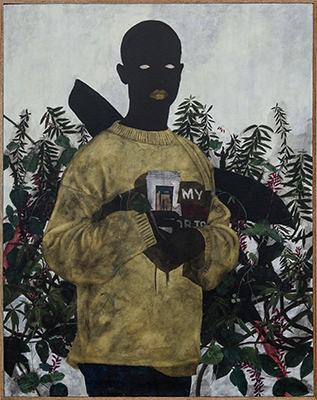 Another artist who works with the ambiguity of opacity and clarity is Cinga Samson. Samson an artist from Khayelitsha a township here in Cape Town, with its classical renaissance influence, discourses through this historic aesthetic issues of masculine representation in the cultural dispensation. His adoption of a classic western approach not only imbues his work with historic political discourse it also imbues his sense of the aesthetic with a strategy to challenge the implication behind the tradition portrait in classical painting and its connotations of social and political power through history. Samson’s self-portraits who are captured in various guises, with opaque eyes, with effeminate gestures, the two pieces titled Unyana Welanga I and II translated as Son of the Sun. The self-portrait captures a demure Samson with the same vacant and opaque eyes. The strategy for capturing the same figure in different angles speaks to the classical canon’s sense of repetition in order to emphasize power. 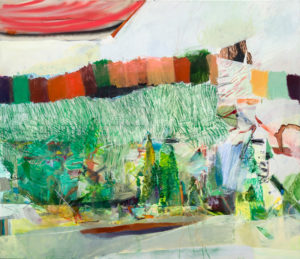 Dorothee Kreutzfeldt’s inundated canvases also makes its way in the show. A piece that continues the artist’s exploration with the canvas as confined and sparse in order to inundate it with a maelstrom of images and lines. This way the piece operates with a measure of insouciance and spontaneity, and a measure of collective movement. Titled passing lodge view speaks to the artist concern with space being imbued with its own narrative, the abstract nature of the piece and its title suggest a measure of distance and proximity between the figures that comprise it.
Blank Projects is a gallery that houses artists with a minimalist inclination in their work. The research project of oeuvre can be traced in the works of artists like Turiya Magadlela, Donna Kukama, Jody Brand, Pedro Wirz and Gerda Scheepers, artists that were included in the exhibition.