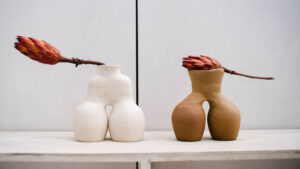 Clay as a material is malleable, thus it is able to be shaped in the artist’s vision. So, pottery can become a personal or political manifestation. As well as the aesthetic heritage, pottery is a record of the world around it, the zeitgeist and the society it was borne from. This is why recording and archiving these works are not only important for the art world but vital for history.

Body Vessel Clay. Black Women, Cermaics & Contemporary Art hosted at Two Temple Place is an exploration of how ceramics have been disrupted, questioned and reimagined by Black women over the last 70 years. The exhibition will bring together more than 80 works by eight artists and according to the press release, includes ceramics, preparatory drawings, film and archival material. The exhibit traces post-colonial, gender and class perspectives on ceramics’ manufacture and ownership across continents.

Kwali’s work from the 1950s to 1970s exists between Nigerian and Brtiish pottery on which Body Vessel Clay pivots upon, and she remain a key but largely widely underecognised African potter in her homeland and beyond. Kwali infused indigenous Gwari motifs into her pottery and became a leading figure emerging as the star of the Pottery Training Centre set up by British potter Michael Cardew. This was a vital milestone in Nigerian modernism and Body Vessel Clay will provide archival photographs and documents from these essential early years in Abuja, Nigeria. It shows life at the training centre and the new wave of artistic direction emerging from the colonial rule of the British Empire. 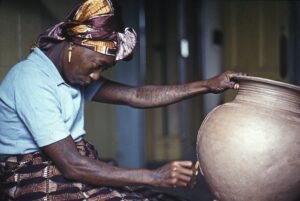 This was a time when Kwali was already locally recognised in her community and collected by the Emir of Abuja (now Sueja). Decades later in 2007, she would be celebrated on the 20 Naira note depicting her creating a pot.

Body Vessel Clay is a look at one of the world’s oldest forms of art, with Kwali’s own work reinterpreted by contemporaries. Dame Magdalene Odundo was introduced to Kwali in the 1970s. She recounts “I was in awe of Ladi Kwali – she had an amazing presence. Every time I walk around my work, I think of her. She opened up my horizons. I started appreciating [through her work] the longevity and universality of the art in other African countries. The work of Ladi Kwali was absolutely poetic. She had a sense of geometry in her bones, and could see form as it was being made.” 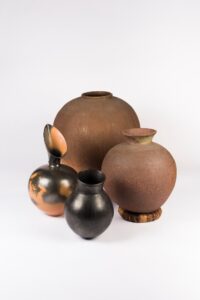 Clay as a material is malleable, thus it is able to be shaped in the artist’s vision. So pottery can become a personal or political manifestation. As well as the aesthetic heritage, pottery is a record of the world around it, the zeitgeist and the society it was borne from. This is why recording and archiving these works are not only important for the art world but vital for history.

The exhibition’s curator Jareh Das recalls first impressions of Kwali, “I grew up in Nigeria in the 1990s and was re-introduced to Ladi Kwali when the 20 Naira note was re-designed to include her image at the throwing wheel on the reverse side. Years later, an encounter with Abuja Pottery at a UK museum spurned a return to Kwali and her astounding achievements as a leading figure existing in the worlds of Nigerian pottery and British Studio Pottery. Body Vessel Clay begins with recognising the hybrid and radical practice of Ladi Kwali through to the contemporary generation of Black women artists reimagining the material in new ways as a time-based medium with performative qualities. This exhibition attends to clay’s transformative, haptic, malleable and metaphoric potential, whilst situating ceramics as a continually expanding field”.

I spoke with Dr Das to find out more about the show and why Kwali was so special.

What was your background prior to Body Vessel Clay?

I have worked as a researcher, writer and curator for over a decade with a focus on performance art. I consider global modern and contemporary art through the lens of performance art, studies and theory. I also have a strong interest in working and thinking across different disciplines, as well as working against rigid classifications or schools of thought. I was born in the UK (Newcastle-upon-Tyne), raised in Nigeria (Lagos), these two cultures shape and influence me. I have also been fortunate to live and work in the UK and internationally since 1999 giving me a rich perspective on art across cultures and geographies. More here: https://jarehdas.com/about/

What was your inspiration for curating Body Vessel Clay?

Body Vessel Clay begins with Nigerian (Gwari) potter, Ladi Kwali. She is the inspiration behind the show and its foundation. Her skill was exceptional and her life story extraordinary as an established potter, famous already before entering a dialogue with British pottery elevated by Michael Cardew and the Pottery Training Centre in an area now called Suleja.

It was a deeply colonial project but we see two cultures coming together to create hybrid ceramicwares for local post-independent Nigeria’s middle classes. The exhibition explores this period between the 1950s-70s, individualised Ladi Kwali other potters who trained there before and after her, such as Bawa UShafa, Asibe Ido, Halima Audu, George Sempagala, Kofi Athey, and most notable famed British-Kenyan ceramist Dame Magdalene Odundo who trained there for three months in 1974.

All of these aspects are considered through objects histories, photographs, archival documents. Leading to an important acknowledgement of Black women’s contributions to the history of ceramics, intergenerational influences and the new ways a younger generation are interpreting and using clay today.

The title of the show alludes to the relationship between the medium and the work itself being a vessel for something greater than its constituent parts. Can you talk more about this?

The title is open for interpretation. These are words that kept coming to mind through my research process. They are very loose, intentional yet unfixed in meaning and the exhibition doesn’t unfold as fixed to each of these words. 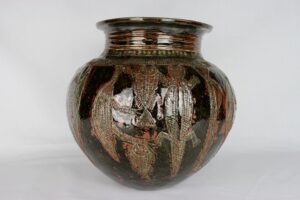 Why do you think Ladi Kwali’s work has been so influential?

Ladi Kwali is still largely unknown outside of specialist circles so I don’t actually know that her work has been so influential on a younger generation. People still don’t know her much about her life. This is a central aim of the exhibition to make her achievements and life story more visible and to show her influence within the pottery centre and beyond, directly on artists like Halima Audu (who sadly died young and only spent two years at the pottery training centre), and Magdalene Odundo.

Can you talk more about the show’s feminist significance?

This is most evident in the matrilineal lines across the exhibition. Women to women passing down traditions. Kwali entering the training centre made way for other women to join after her. Bisila Noha explores forgotten African female potters and addresses why they are overlooked through her research and ceramics practice.

What was your favourite piece and why? 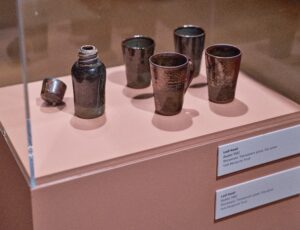 What are you working on next?

Christabel Johanson is an arthistorian and writer from London.

← Marcel Pinas: more than an artist
Personhood in the paintings of contemporary Nigerian artists. →