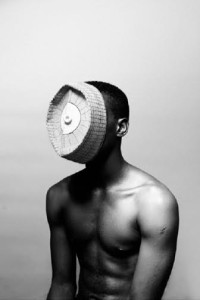 I was struck by the historical and geographical rootedness of particular artists even as they (or their work) may travel across borders. In a world where borders are rigidly controlled, which of the artists have enjoyed relatively free movement, and which have not? Exhibitions that are so deliberately curated would benefit from giving more attention to their texts. There is potential for critical and creative dialogues between curators, artists, writers and art historians.

Yvette Greslé on the group show ‘Broken English’ in a new London Gallery. 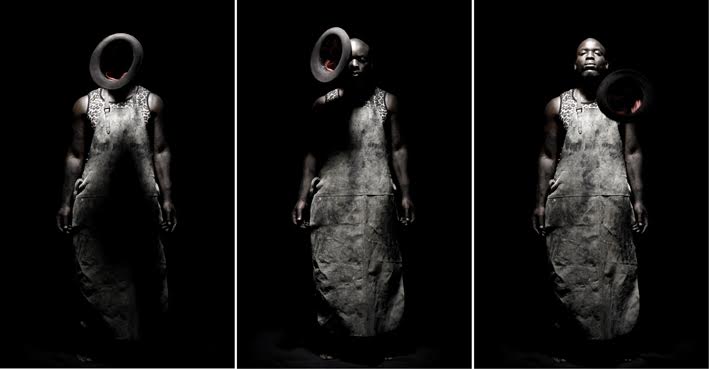 I am standing in front of a series of three photographic works (Untitled, 2010) by South African artist Mohau Modisakeng. It is he who performs through subtle shifts and props within the space of the work. He stands, facing the viewer, against a dense black background, feet firmly on the floor, and arms at either side. I am conscious of the scale of the photographs, which, in my imagination, simulate a real life encounter with the performing body. The performing figure/ artist wears an animal print vest and a dusty industrial apron that reaches to the floor. An upside-down black bowler hat with a red lining moves from one point to the next, from image to image. In the first it becomes ambiguously, and indeed surreally, the body’s head. In the second, the hat has migrated and the artist’s face is now visible. In the third, it appears to topple from the opposite side. The three photographs capture progressive movement as they invite us to reflect on the stillness of the photographic images themselves. No specific place or time is given. The opaqueness of the work invites me to reflect on its internal world, its exploration of the body, performance and choreography, and its study of the tensions between movement and stillness, the real and the imagined. 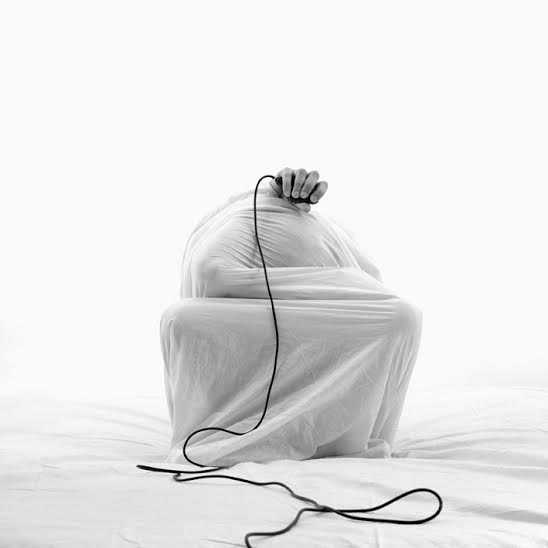 The conceptual and poetic sense that characterises Modisakeng’s work is present in each of the works selected for Broken English, at the Tyburn Gallery and visual connections are suggested across works. The surrealist device of the hat/face deployed in Modisakeng’s work recurs in a photographic portrait by Nigerian artist Lakin Ogunbanwo, untitled (Hat on Face), 2013. In a 2011 work from Angolan artist Edson Chagas’ photographic series Oikonomos, the artist’s head is covered with a shopping bag. In this series the individuality of the human photographic subject is displaced by shopping bags from around the world. The Tunisian born artist Mouna Karray also mobilises the photographic medium to explore the body and the possibilities of performance. The photographs titled Noir #1 and Noir #8 (both 2013) are part of a series of work prompted by the Tunisian revolution. A campaign of civil resistance against social, economic and political repression and corruption, the revolution began on 18 December 2010, and is a constituent of the “Arab Spring”. In each photograph the artist’s body is shrouded in a white sheet, its whiteness against the whiteness of the image as a whole. Only a hand, releasing the camera’s shutter is visible. We can only imagine the body through the sculpture-like forms, in various different and curious positions beneath the sheets. This staging is absurd and funny, with the hand poking out to take the photograph. But the idea of a body wrapped in sheets also suggests the affects of claustrophobia and confinement and the shrouded body of the dead, although in this instance the human form we recognise is alive. 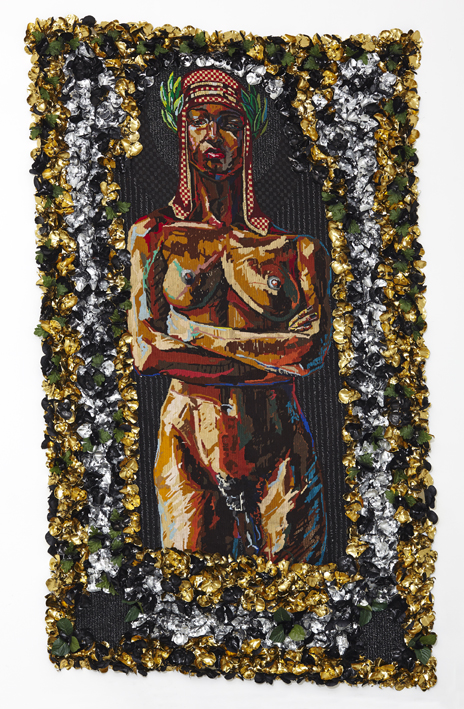 There are many possible points of entry into this show Broken English, which encompasses a range of media including photography, painting, sculpture and mixed-media. South African artist Athi-Patra Ruga’s monumental Proposed Model of the New Azanian (2014), is a tapestry of an ambiguous god/goddess-like figure framed by kitschy artificial flowers. Ruga mobilises critical humour and performance in his work, which has particular meaning to the historical and political conditions of South Africa. The work is part of a series titled The Future White Women of Azania. The idea of Azania has a complex history, which begins in Ancient texts, and carries specific meaning to South Africa, and different ideological positions driving the historical and political resistance to white supremacy. The Pan-Africanist Congress of Azania (PAC) proposes that South Africa be re-named Azania. There is a historical and geographical specificity to Ruga’s work, which is important to consider, and this is true of all the artists exhibited. Zimbabwean artist Michele Mathison’s sculpture Revolution II (2015) is adjacent to Ruga’s tapestry. It is a wheel-like structure of wooden toy-like machine guns constructed out of burnt pine wood.

The idea of “globalised world” put forward by the exhibition’s curatorial text is a contested one. I was struck by the historical and geographical rootedness of particular artists even as they (or their work) may travel across borders. In a world where borders are rigidly controlled, which of the artists have enjoyed relatively free movement, and which have not? Exhibitions that are so deliberately curated would benefit from giving more attention to their texts. There is potential for critical and creative dialogues between curators, artists, writers and art historians. The exhibition foregrounds works by artists who have a historical/lived relationship to the African continent although it sets out to engage a broader idea of “the global”. Brazilian artist Eduardo Berliner, one of the artists born outside of the African continent, lives and works in Rio de Janeiro. Berliner’s paintings, which suggest dream-like and psychologically charged scenarios, were exhibited recently on Pangaea II: New Art from Africa and Latin America at the Saatchi Gallery (11 March – 17 September 2015). A number of the artists exhibited are also a significant presence on the “Contemporary African Art” scene, which is becoming increasingly visible in London, driven, overtly and less so, by various constellations that include Saatchi Gallery and the annual 1:54 Contemporary African Art Fair. Kim Stern the curator of the exhibition at the Tyburn Gallery is a former director of the Goodman Gallery based in Johannesburg and Cape Town, a gallery that includes William Kentridge as part of its stable. She is also a consultant to the Global Africa Project at the Museum of Arts and Design (New York), and a consultant to London’s Saatchi Gallery. 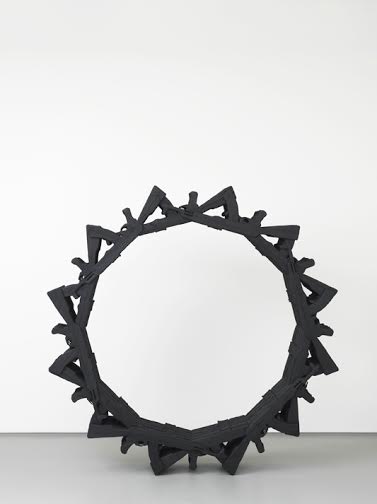 While I celebrate the interest in art practices that have a relationship to the Global South there is an unfortunate sense of being stuck in a stagnant cycle of perpetuating the historical invisibility of the “woman artist”. It is impossible not to notice that the Saatchi Gallery, the 1:54 art fair, and the consultants, curators and art dealers in dialogue with these institutions, perpetuate a world in favour of the “male artist”. This is strange to me, given the significant work of women artists, and the fact that art historians, working from the foundations of feminist thought, have demonstrated the dynamics and power relations of invisibility. The point has been made. Yet I am compelled to repetitively re-state it, as I encounter exhibitions that relate to the African continent in London. At the Tyburn Gallery I counted, on the basis of blunt distinction, thirteen men and two women. From the perspective of quality of work, this is an impressive inaugural show, but I hope, writing as someone with a personal investment in the African continent, to see more women artists figured in the future. Exhibitions which engage the political risk reinscribing inequality. 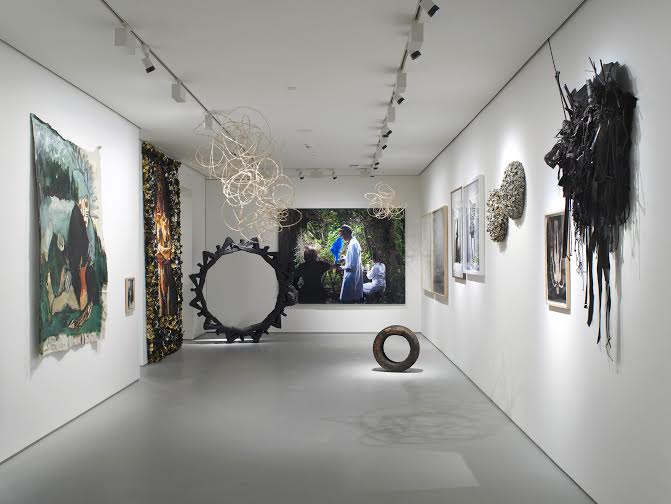 The political is an important thread within this exhibition. Politics is not present in a didactic sense but rather through what is not overtly stated. It is there in historical visual references, which may be legible or not. It is also there in what is felt or visually registered through the sensations, affects and poetics of the works themselves, their use of particular materials and media, or their deployment of strategies such as performance.
The “Broken” of the exhibition’s title implies something that once was whole and homogenous, and of course, this is a myth. The idea of English as a language, depending on where one is situated, is historically and politically freighted. It remains in historical memory as a language embedded in a colonial and imperial past. Of course, English, similarly to any language, is also a site of imagination, creativity and social and political agency. To break something up is to shift its meaning, to reconstitute, recast and re-invent it.