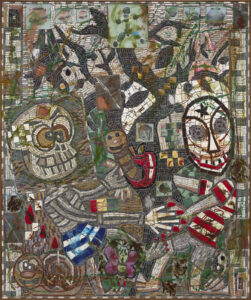 About:
Cameron Welch’s (b. 1990, Indianapolis, IN) mosaics reference mythology, black identity and modern society, combining found artifacts from the recent past including CDs, brooms, mirrors, and drums. The surface of each work is crafted out of tiles pieced together from larger block which form individual lines throughout the work. This process speaks to both a specific art historical referent as well as an inherent kitsch. Found objects are imbedded in each work to activate the figures portrayed. These labored surfaces are then collaged and painted atop of in a frenetic manner that pushes against the precious nature of the mosaic process. Welch states, “I was thinking a lot about what could be a new myth and trying to create a new world where people of color get to be represented in this way. So I thought about mashing ancient myths around beauty, sexuality, and identity with more modern signifiers. There are CDs—which are like fossils in the world now because we don’t use them anymore. I was interested in the stories they evoke for people. The mythology doesn’t stop at the depiction of the thing by me but takes on different things with the different people who see the paintings.” 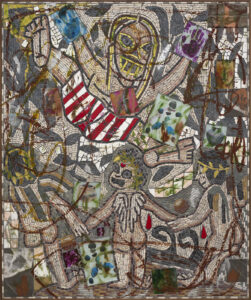 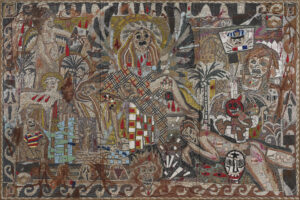 Welch received his MFA from Columbia University in 2016. He was nominated for the Rema Hort Mann Emerging Artist Grant in 2016, and was the recipient of One River School’s Emerging Art Award in 2019.  Welch’s work has been featured in such publications as Vice, Hypebeast, and Forbes. He lives and works in New York, NY. (text Jenkins Johnson Gallery).