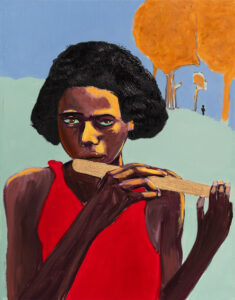 Namoda is a painter whose work transfigures the cultural mythologies and historical narratives of life in post-colonial Africa, particularly those of the artist’s native Mozambique. Namoda’s paintings are highly elusive, drawing upon literary, cinematic and architectural influences that capture the expansiveness of her specifically Luso-African vantage point.
The idiosyncratic subjects who appear and reappear in Namoda’s paintings also convey this hybridity: they emerge from African indigenous religions just as much as they spring from Western mythologies. Her work borrows from an art historical canon and arises from vernacular photography in equal measure. While they appear straightforward, her images are conceptually rigorous and portray figures with complex narratives. Namoda is equally attentive to landscape, creating scenes that depict both the rural and the urban through a surreal lens. Having lived in Haiti, the United States, Kenya, Benin, Uganda and other countries, Namoda has acquired a grasp of place that is at once grounded and subversive. 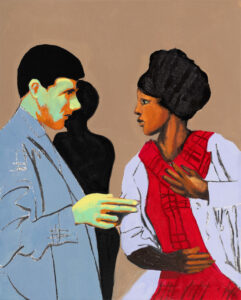 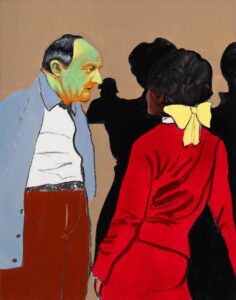 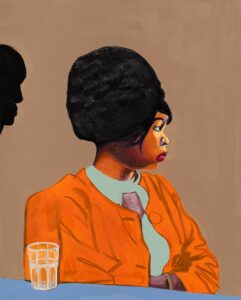 Her landscapes resound with the features of equatorial life – blazing suns, palm trees –but they are mythic in their representation and pleasantly impeccable – mirroring the subjects that populate them.
2.
Life has become a foreign language expands on Namoda’s impulse to revisit historic scenes, adding layers of complexity rooted in a desire to recontextualise. By referencing archival images, such as Emperor Negus’ wet nurse and Mozambican photographer Ricardo Rangel’s reflections on life in Mozambique, Namoda marks moments of celebration and highlights the historic residue on Black women’s lives, offering new readings that interrogate the context that informed the original images.
Namoda uses distinct visual strategies to push against exoticising readings of her work: recurring figures possess piercing green eyes which stare definitely back at the viewer and the flat colour backgrounds remove context and sense of place. The artist applies elements of photorealism to parts of the body to insert layers and reinforce surrealist sentiments. For example, the skin of the figures is illuminated, presenting an essence of light entry but without indication of its source. The impression of self-illumined figures suggests a divine otherworldly presence.