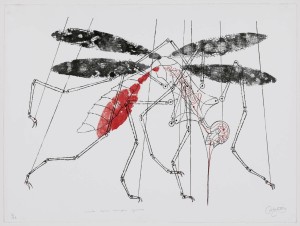 This work, To Love With Someone Else’s Blood (2005) ,  is in the collection of the Museum of Fine Arts in Boston.

“My work is a kind of reflection concerning the state of humanity and humanity’s relation to its universe. When I try to theorize what I do, I find it to be somewhat like poetry or philosophy, in the realm of images. Therefore my principle influences are literature, cinema, and life. And I am very interested in all the materials, which in one way or another speak to the human condition. My work often makes associations and visual references with religion and with the culture that has to deal with magic as well. For me the dialogue around materials is also very important, and I perceive my drawings as three-dimensional works.” 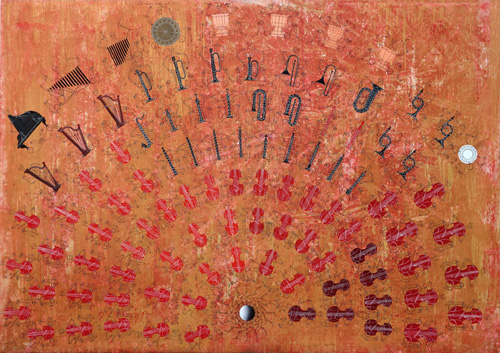 “With respect to the phenomenon of my work or Cuban art in general and the international art scene, I think that Cuba, as a sovereign Latin American country is in the process of a very interesting phenomenon with respect to so called “first world” countries. In Cuba, there are many economic and social difficulties of all kinds; nevertheless these same difficulties have become very efficient schools of learning, not only for artists, but also for Cubans in general. Sometimes barriers inspire people to confront them and in that sense, the shortage of materials, the shortage of its use, the shortage of information, yet this has made artists take for granted their sense of selectivity, their conscience, at the moment of creating. What are they making? Why are they making it? How are they going to make it? I have heard it said that Cuban artist mature very quickly. A twenty-year-old artist has already found a path for his or her work, and even though this is a very young age, they have already found a path to work within and follow through. I feel this is due, in part, because there are so many stimuli, so much information, and so much to choose from that there is often a kind of dispersion. In one way it is an advantage. Well, I dont want to say advantage because it is a very complex issue, but it is a very interesting trait that in our poorer countries, there is so much in our history to choose from…everything in life has a protagonist.” 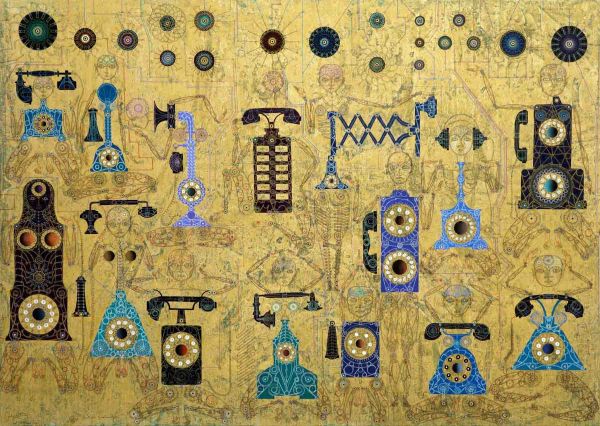 Over the course of his career Carlos Estevez (1969, lives and works in Havana) has been deeply concerned with man’s spiritual journey. Many of his paintings and drawings since leaving his native Cuba, have been concerned with the ethereal spheres and imagined spaces outside the realm of our palpable perception – and the various roads that can lead one there. Through his paintings, Estevez attempts to make sense of the vastness of the universe despite our inherently limited access to understanding it. Travel, whether real or imagined, is implicit in his visual quest and the most recent series of works presented here address this theme in Estevez’s characteristic poetic, sometimes hermetic yet always fulfilling use of his highly personal iconography that employs strategies such as maps, charts and other formal devices which help to classify and categorize information associated with a spiritual journey. 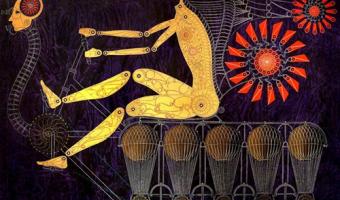 Journeys (real or imagined) through or against a current or veil of time are at the heart of Estevez’s creative process. To some degree this group of paintings focuses on the subject of water, its possibilities and limitations. This is not unexpected from an artist who comes from an island that, no matter how large and culturally developed, still possesses numerous inherent limitations of movement and possibilities of self-expression. 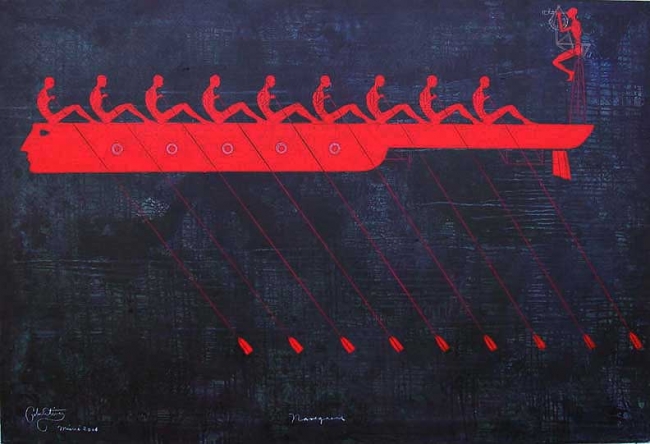 “Carlos Estévez is from the generation of Cuban artists and intellectuals who, emerging in the 1990s, developed a sense of connectedness to the world outside of Cuba where social, political and geographic boundaries do not exist compared to the restricted freedoms on the island.
Free to develop a symbolic language of his own, Estévez uses images from the physical world to convey his thoughts on isolation and solitude. Present are his trademark mechanical figures: hybrids of man and nature, combined with elements of music, marionettes, architecture and telephones. His interest in alchemy and the paradoxical nature of man are evident in this new series illustrating the divergences that derail us from our higher self. 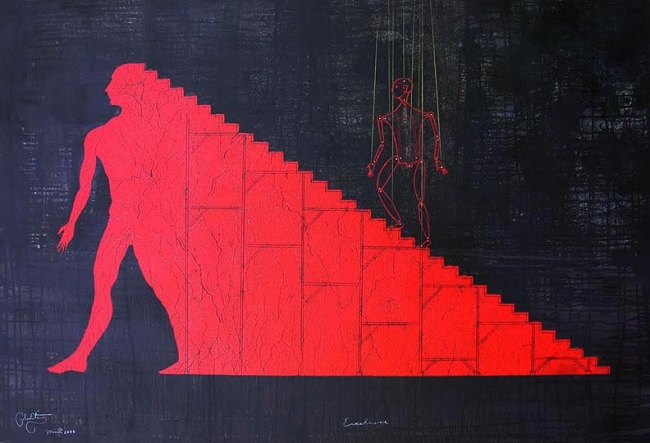