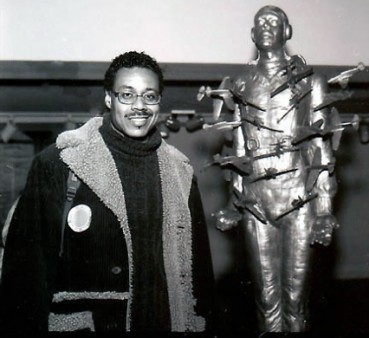 Sculptor Michael Rolando Richards perished in the attack on the World Trade Center on September 11, 2001. At the time, he was enjoying a fellowship with World Views, an artist-in-residence program sponsored by the Lower Manhattan Cultural Council. He had been hard at work on his project,The Tuskegee Airmen, the African-American air force that was segregated during World War II.

He attended an opening at the Grey Art Gallery on September 10th, then decided to go to his WTC studio on the 92nd floor in Manhattan and apparently stayed overnight instead of returning to his home in Rosedale, Queens. When the planes struck at 8:45 a.m., he might have been getting ready to go to work at the Bronx Museum of the Arts, where he was a freelance preparator. 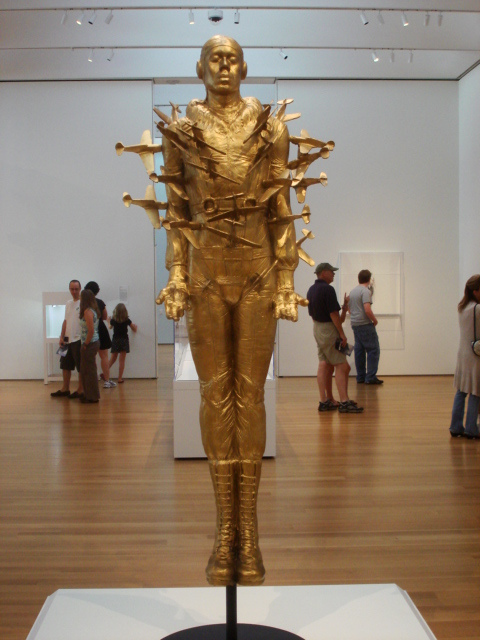 That Richards died from an airplane piercing the body of this tall, trim tour seems eerily coincidental and almost mystical. Richards’ well-known sculpture Tar Baby vs. St. Sebastian,1999, features the artist’s own tall, trim body as the full-length male figure standing straight and lifted off the floor by a slender pole. The gold resin body, clad in a military uniform, bears numerous small airplanes driven into the torso, their noses piercing the surface like the arrows buried into St. Sebastian’s flesh as he became a martyr to his Christian faith.

Michael Richards’ faith was in humankind. He truly believed that our better angels would prevail – even in the face of political turmoil, racist attitudes and personal anger. Curator Jorge Daniel Veneciano, who organized Richards’ exhibition at the Studio Museum in Harlem in 1996, pointed out that the artist’s reference to flight worked on two levels: the flight away from repression and the flight toward redemption. 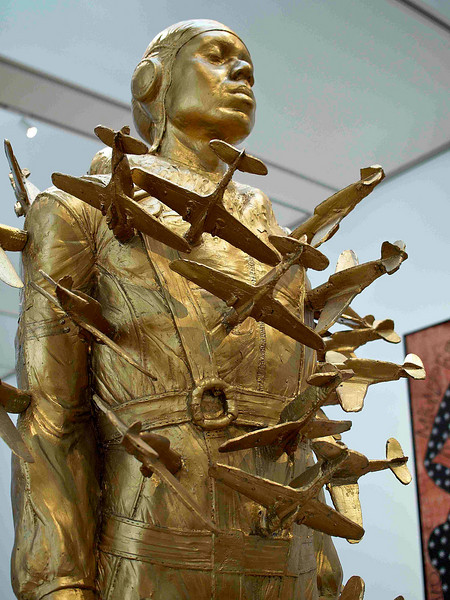 In a 1997 untitled sculpture of a male figure carrying a parachute pack on his back, the artist seems to speak of that dual experience. Here a Tuskegee Airman prepares for flight, focused on the mission and his survival. He willingly accepts the risk while he relies on his experience, skill and a parachute (a metaphor for community of support?) to see him through.

Richards’ life hardly touched Tuskegee, Alabama. Born in Brooklyn to a Costa Rican mother and Jamaican father, Michael Richards lived in Kingston, Jamaica during his childhood. He graduated with honors from Excelsior High School and then returned to New York to pursue his undergraduate degree at Queens College, which he completed with distinction in 1985. He went on to earn a Master’s Degree in Arts from New York University in 1991. While at NYU, Richards worked as a preparator at the university’s Grey Art Gallery. 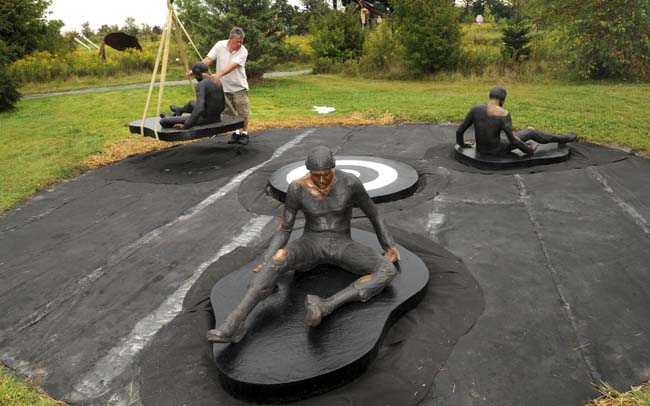 In 1993, Richards participated in the highly-coveted Whitney Museum Independent Study Program, followed by an Artists-in-the-Marketplace Program at the Bronx Museum of the Arts in 1994.

From 1995 to 1996, he participated in the Artist-in-Residence program at the Studio Museum of Harlem and The Space Program, run by The Marie Walsh Sharpe Art Foundation in Colorado Springs, Colorado.

In 2000, Richards received the Franconia Sculpture Park/Jerome Fellowship. Today, his project for the part Are You Down? is on display in this Minnesota park and has become the Michael Richards Memorial. It consists of three airmen (cast from Richards’ body) sitting in a circle surrounding a target, facing outward. Cast in fiberglass, Franconia hopes to raise enough money to cast the work in bronze in order to preserve the work in perpetuity.

The Tuskegee Airmen series highlights a squadron of African-American pilots in World War II–formally called the 332nd Fighter Group in the U.S. Army Air Corps–who were segregated from the other Army units. Despite this racist slight, the squadron excelled in its service to this country. Some sources have said that no airmen lost their lives on a mission during the war. This assertion has been challenged since 2006. However, in Richards’ day, the reputation of the Tuskegee Airmen remained almost mythic–as Richards’ works tend to be.

The name Tuskegee also brings up the association with the notorious syphilis experiment conducted by the U.S. Public Health Service from 1932 to 1972. Infecting African-American sharecroppers, the scientists wanted to observe this horribly destructive disease. Another example of racism in the United States, this experiment withheld penicillin, which became available in 1929, from its subjects. During the course of this experiment the wives and children of the subjects were infected, too. 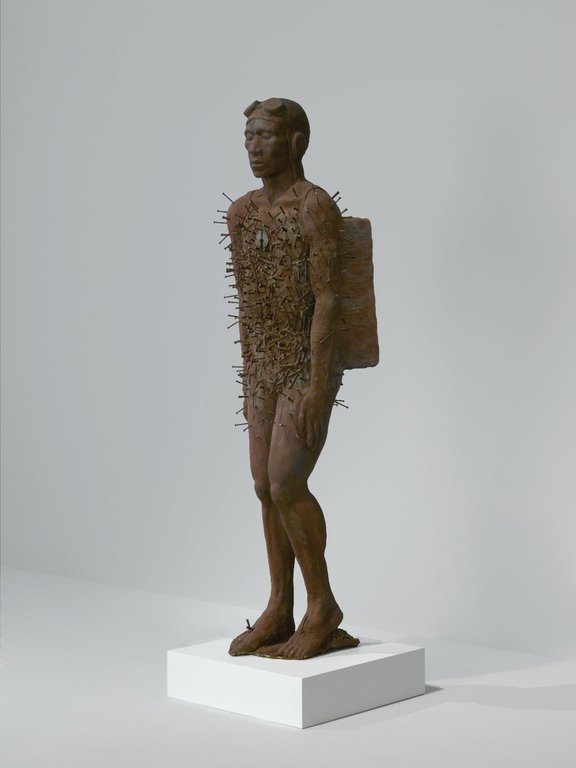 Clearly, Tuskegee resonated with Michael Richards for a number reasons.

At the time of his death, Richards was working on Fallen Angel, a life-size piece based on his own torso that was meant to be positioned on the floor. Wings were attached to the back with one wing broken off and left on the floor. Today it serves as a metaphor for the artist’s life and death.

Executive Director of the Lower Manhattan Cultural Council in 2001, Liz Thompson noted that “He was so promising. He was on a tear.” So true.

Today, we remember him for all that he was and all that he was meant to be. And we mourn the loss of a great artist and equally wonderful friend. A memorial was held at the Studio Museum of Harlem on September 23, 2001.