“People do not come to me, because I come to them. I exhibit in their environment, just on the street. That’s taboo breaking. They often do not understand what art is all about but they are curious and ask questions. When I have not exhibited for four months they ask when the next exhibition will be. Some even send their children to me so they can learn to draw. So there is a radical change going on in terms of the appreciation of contemporary art in Bamako. Fortunately it’s not limited to the international art scene!”

Rosalie van Deursen travelled to Bamako to talk with local artists about contemporary art in Mali.

Walk through Bamako in Dakar

Throughout the month of June this year, Bamako, the capital of Mali, was relocated to Dakar in Senegal. At the ‘Walk through Bamako. Arts spaces and artists in the city’ exhibition visitors were invited to take a stroll through the Malian city. This exhibition was part of the 12th edition of Dak’Art 2016, the contemporary African art biennale.

Installation of ‘Walk through Bamako’, 2016

One of the co-organizers of this exhibition is the Malian artist Souleymane Ouologuem. He explains how the idea came about: “The curator of this exhibition, Mauro Petroni, visited Bamako in order to find Malian artists. He soon discovered that all the individuals were inextricably linked since many Malian artists work together. We learn techniques from each other and collaborate to organise exhibitions. So if you deal with Bamako that means dealing with all of us! Along with the curator we chose to put all of Bamako’s art spaces on the map!”

Walk through Bamako in Bamako

After the biennale in Dakar I flew back to Bamako itself. This time I visited the ‘Badialan 1’ and ‘Anw-Ko Art’ art spaces. The latter means: together we make art in Malian Bambara. The ‘Anw-Ko Art’ artists’ association initiated by Souleymane Ouologuem consists of a space that serves as a depot for artworks, a work studio, exhibition space and simultaneously a place for meetings and workshops. 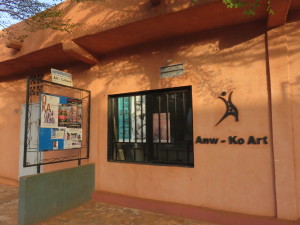 Ouologuem creates elongated vertical paintings divided into different colour fields. He works with mixed media, acrylic paints, pigments, pastels, charcoal and collages. The colour fields are divided by lines, which often consist of smaller colour cubes or patches. Paint layers are thicker in some places and are spread very evenly and in an orderly fashion on the canvas. This abstract character creates an impression of tranquillity, rhythm and space.

This high degree of abstraction originates from Ouologuem’s desire to return to the basics. He refers to his work as ‘Foundations’ and explains: “Everything has a source that should be good and solid, otherwise it’s all meaningless, no matter how beautiful the outside is. This applies to both people and buildings.” Ouologuem hopes to create awareness. He sighs: “All over the world people are losing their culture and values, such as respect for their elders. It is evident in loose parenting and I see children being raised without rules. The basis is gone.” In Ouologuem’s ethnic background, Dogon, there have always been solid family structures that ensure individuals a strong foundation. This structure is reflected in the architecture of the Dogon family houses, which are a source of inspiration for him.

During my visit to Bamako, I visited ‘Badialan 1’ twice. This art space is named after the neighbourhood in which it is located and is always a busy venue with a constant coming and going of artists and visitors. The house is divided into multiple rooms providing workspace for a large number of artists. Although no one seems to have a permanent workplace in this collective founded by Amadou Sanogo and Ibrahim Konaté. Sanogo explains how the space came about: “We needed a place where we could operate freely and conduct research without family or neighbours watching over our shoulders. In addition, we wanted to invite other artists to discuss issues and organize debates. It is a gathering of visual artists, musicians, writers and curators. We started together and the initiative grew into ‘Badialan 1’ in its current setting. Fortunately we are now part of the international art scene.” Artists working at ‘Badialan 1’ are: Noumouké Camara, Toussaint Klémagha Dembélé, Mohammed Diabagate, Karim, Oumar Kouma, Ibrahima Konaté, Amidou Koumare, Amadou Sanogo, Siaka Togola (who is also known as ‘Zulu’) and Massira Touré. 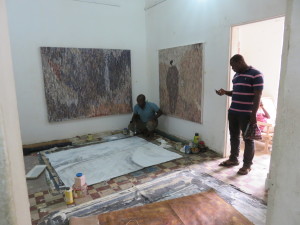 Sanogo makes no bones about the fact that Mali needs him. Why? Sanogo wants to break taboos and arouse people’s curiosity and invite them to question the world around them. He makes big brightly coloured canvases with strongly aligned figures. These highly abstracted figures are often stretched and appear distorted. Heads are not located on the trunk, limbs merge or feet crush a head. The faces raise questions; why do they look tormented, strange and scared? What stories are being told here? Why are there so many dots?
Daily life is Sanogo’s inspiration. He explains: “There are so many things that inspire me in my interactions with people but also in my observations. When I read the newspaper, watch TV or use Facebook I question the world around me. I wonder ‘in what plan?’ or ‘on what basis?’ or ‘compared to what?’ or ‘what is the context?” Curiosity and investigation are what drive Sanogo’s art. 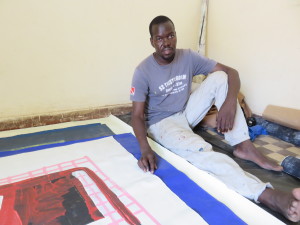 Amadou Sanogo talks about his work.

His latest series ‘Sans Tête’ (headless) refers to the tendency that people forget to use their heads. Four of the five senses are located in the head so according to Sanogo the head acts as the engine of life. “People speak a good deal of rubbish, they tend to generalize and have all sorts of assumptions. It’s clear in both social and political life. People should step out of their little world more often, be curious and share with others. But most of all do research before claiming something. People spread all kinds of ‘truths’ on Facebook without context or research. That’s why in my work I let the body amuse itself without a head!”

At the Art Academy in Bamako (Institute National des Arts), Sanogo stood out as a student. For his graduation portfolio he wanted to let go of everything he had learned. So he painted with his fingers and picked proverbs from his birthplace Segou as a theme. With a satisfied smile he proclaims: “My research was very extensive and the teachers had never seen such a comprehensive study by a student. You know, proverbs are universal truths and reflections of wisdom. When a child learns the meaning of proverbs, they benefit from it later in life. It was the beginning of my big questioning. Don’t forget that art does not exist without research and questioning!”

Sanogo repeatedly emphasizes that he takes pleasure in breaking taboos. It started with the decision to become an artist, which was absolutely not appreciated by his family. Besides that, he is bold in his choice of subjects and does not shy from investigating socio-political themes. In one of his works, for example, a dotted figure is leaning on the knee of a blue figure. Sanogo explains: “The color blue stands for fear and the dots are queries. Dots always represent questioning. The work is about trust, in which we are often disappointed. Many relationships are based on hypocrisy, especially in poor countries. People are sycophants because they want to ingratiate themselves with others, instead of telling the truth. Poverty is the engine of hypocrisy and there is no place for dignity in poverty.”

Another work depicts two figures, one of which bends over the other who showers himself with water which comes out of his own hand. His heart and brains are clearly visible. Sanogo sighs and says: “People just want to water themselves; you find it in all walks of life.”

Value of art in poverty

What is the value of art in a country where people are looking for food? Sanogo asks himself the question and answers firmly: “Food does not only pass through the mouth, the intellect also needs to be fed. It needs to digest observations. Only when you understand that every reality as shown on TV or in a newspaper is directed, then you are free. I also hope that more people look at themselves instead of blaming others. Criticizing others is easy; think how we criticise a president. But what if you were sitting on the president’s chair? What would you do?” Sanogo has incorporated this theme in a work in which a crowned figure sits on a dotted carpet.

Sanogo tries to show his work to as many Malians as possible. His exhibition spaces include the city streets themselves. He explains enthusiastically: “People do not come to me, because I come to them. I exhibit in their environment, just on the street. That’s taboo breaking. They often do not understand what art is all about but they are curious and ask questions. When I have not exhibited for four months they ask when the next exhibition will be. Some even send their children to me so they can learn to draw. So there is a radical change going on in terms of the appreciation of contemporary art in Bamako. Fortunately it’s not limited to the international art scene!”
Bamako’s art scene is buzzing as never before. Determined artists are uniting and conquering both the national and international art scene.