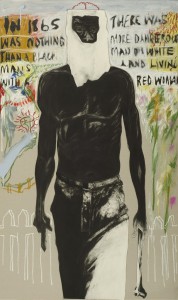 “Theo Danjuma’s collection confirms the spirit of a new kind of contemporary compositional art from all corners of the earth; that makes for a more inclusive display of works.”
Rajesh Punj on the collection of the young, London based collector Theo Danjuma.

Amid the melee of commotion that proliferates during the art world’s most significant calendar event, Frieze; there are other shows that more regularly would be considered critically necessary. Ceased upon they are choreographed into the autumn art curriculum as a consequence of the art fair, and serve to amplify the energy of international contemporary art. These are exhibitions that might well be lost on the cultural periphery, or serve as engaging counterpoints to the main event; for the inventiveness of artists and institutions alike.
On the edge of London’s Fitzroy Square, inside a period house that appears as significant as any interlocked into the square, was an exhibition of works of the young collector Theo Danjuma. Having acquiring a wealth of works that focus for the majority on the contemporary African art scene; Danjuma has audaciously drawn together a calibre of artists the like of which have been a long time coming. Among them Berlin based Vietnamese artist Danho Vo, Norwegian Matias Faldbakken, Los Angeles based artist Oscar Tuazon, British YBA veteran Sarah Lucas. European and American works that have been drawn into the Danjuma Collection alongside pieces by Nigerian Emekha Ogboh, Ethiopian born, New York based artist Julie Mehretu, South African Nicholas Hlobo; and Ghanaian born, London based artist Lynette Yiadom-Boakye. In a temporary exhibition of two and three dimensional works that are collectively and critically of the moment, it is impossible not to be thoroughly engaged by these virtuoso artworks. That are a measure of the graffitied styled and unpoliced actions of a new generation of international artist reaching for materials as the source of their ideas. And the verve and vigour with which the majority of the artist’s collected by Danjuma work is quite inspired. 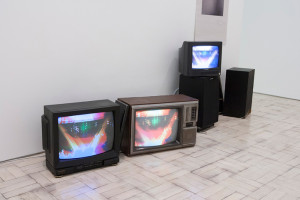 Rooted to the basement is Matias Faldbakken Untitled work (Golf Bag) 2011, which is in close proximity to South African Dineo Seshee Bopape’s Exit 2103. A work that is comprised of three television sets and two speakers that appear to have been high-jacked by an extra-terrestrial energy transmitted on the screen. Whereby the routine of figures and television dialogue are replaced, exterminated even, by these altering landscapes of fluctuating colours that have turned these containers of entertainment into messengers for other wordly acts. Bopape’s relic televisions reflect the hyper modernity we have become accustomed to in the west, from the more cumbersome recycled objects that have become the steadfast instruments of every other home in the world.

The televised alien invasion leads one in the direction of a flurry of synthesised sounds that accompany a series of short film pieces entitled (dis)connect I,II, III, IV by Nigerian Emeka Ogboh. Which for the most part are some of the most impressive collaged film pieces to have come onto the art scene for a long time. Against this absorbing yet abrasive soundtrack from the city, these interconnected films appear as technically crafted mirror images of bold technicoloured pedestrians and motor vehicles that inter-collide into the subdivided lines of the elongated screen. And as remarkable acts of visual alchemy, the generated scenes of figures emerging in the foreground, melting into their symmetrical other half, before impressively dissolving in on themselves, becomes positively hypnotic. As these generative and progressively sequenced events become the sophisticated narrative for what would otherwise be a more original street scene in Nigeria. The disconnect series appears as a synthetic rereading of the very ordinary, as Ogboh’s interlaced patterns of architectonic shapes and human anatomy make for a thoroughly arresting work. 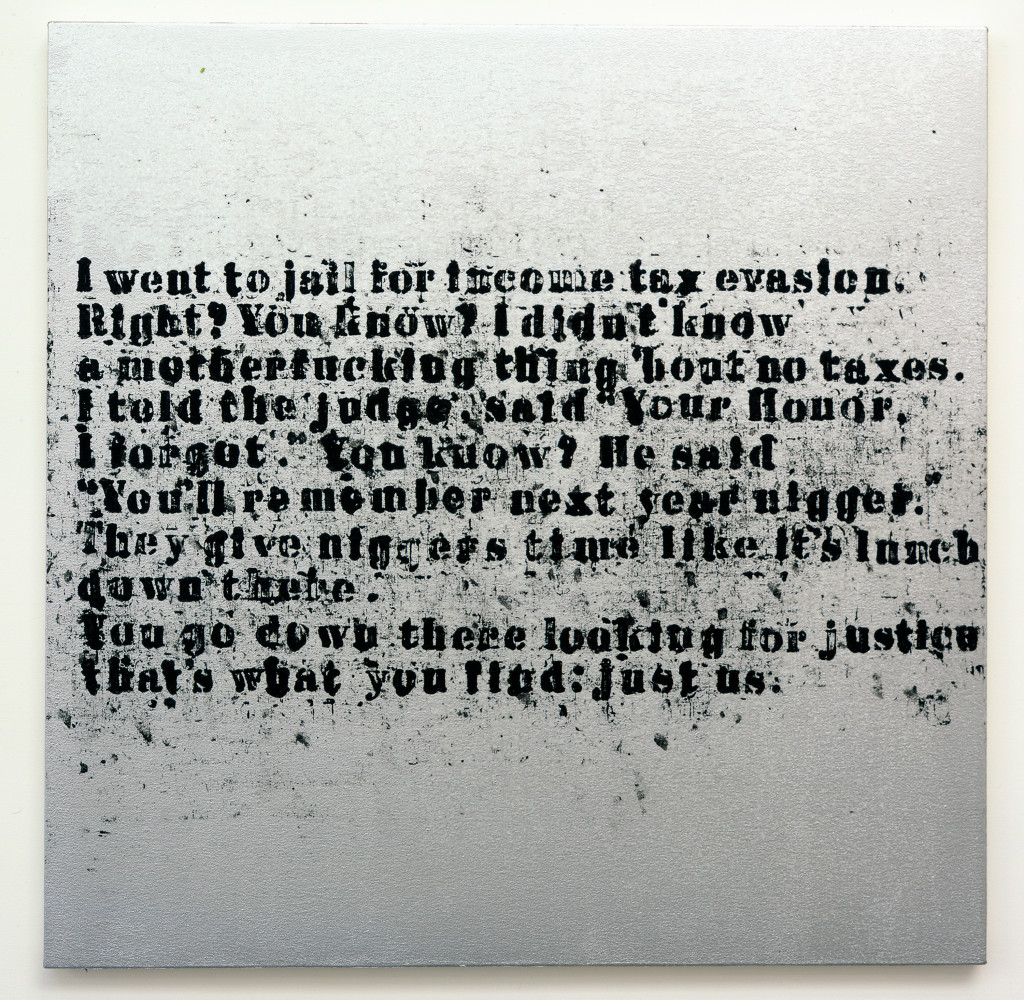 In an adjoining room in more of a domestic setting is a work by German artist Yngve Holen, beside a striking canvas by Black American artist Glenn Ligon. Whose edgy and unapologetic repertoire proves utterly of the moment. In a work that rests on the wall as untidy graffiti, Ligon’s Just Us #6, 2008 reads as a prophecy for modern times. As eloquent as anything by (Jack) Kerouac or (Allen) Ginsberg, from whom this typography appears to have been borrowed; Ligon reads the riot act on being black in America. In a disjoined and partly illegible text, as black on a silver skinned canvas, the paragraph of words reads ‘I went to jail for income tax evasion’, and goes on ‘You go down there looking for justice: that’s what you find: just us’. Ligon’s diction is remarkably dynamic, and the work appears to be a throwback to the era of American counter-culture of the 1950’s; of which Kerouac and Ginsberg were a part.

Zimbabwean Kudzanai Chiurai’s oil on canvas work White Picket 2011, is purposefully lodged into a corner of the stylish upper studio space. The work reads like a contemporary take on much of the signature style of American artist Jean-Michel Basquiat, yet with greater menace. The painting has a central figure gripping a blade in one hand and a blunt instrument in the other. The apparatus of violence that has since become synonymous with the barbarism of the prolonged civil wars across central Africa. With a charcoaled outline of a picket fence differentiating the foreground, that Chiurai’s masked protagonist occupies, from the coloured background; Chiurai’s has loosely painted in lettering that begins to explain the works canon. Of which you can initially make out the words ‘In 1865 there was nothing more dangerous’, which provides a loose narrative for the menacing interplay between symbols of brutality, and the decorative ease with which Chiurai applies colour to canvas. The artists brilliantly engendered work is placed opposite the more distinctive painterly style of London based artist Lynette Yiadom-Boakye. In which a whole cast of black characters take to the canvas’ stage, in what appears to be a more convincing version of modern history. 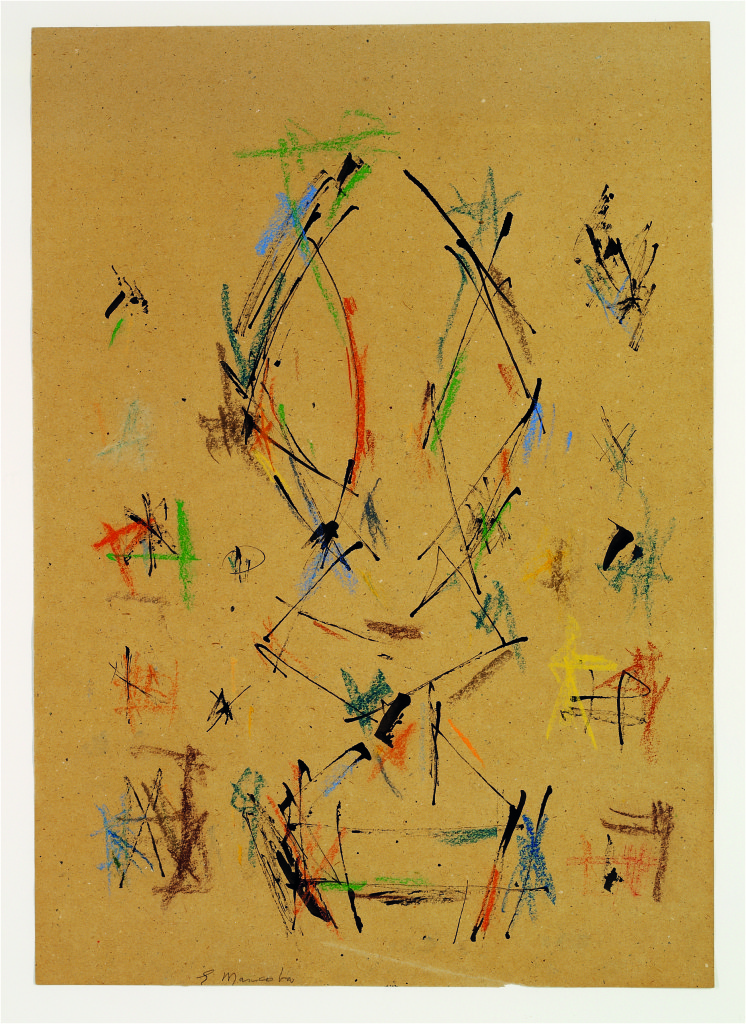 South African Ernest Mancoba’s Untitled 1989- 1990, ink and oil pastel on paper reads like a series of conformations, of ink and pastel drawing swords on a beige coloured battlefield. As Mancoba’s haphazard marks have the same intensity and energy as anything by Russian colourist Wassily Kandinsky. Here there is the minimum of commotion, as the background dominates these hurried marks that the artist comes to settle upon. The work is the measure of a quite remarkable man, who born in South Africa, moved to Paris to study at the École Nationale Supérieure des Arts Décoratifs. Before moving to Denmark to become a founding member of the CoBrA group. Before returning to Paris, where Mancoba eventually died in 2002. 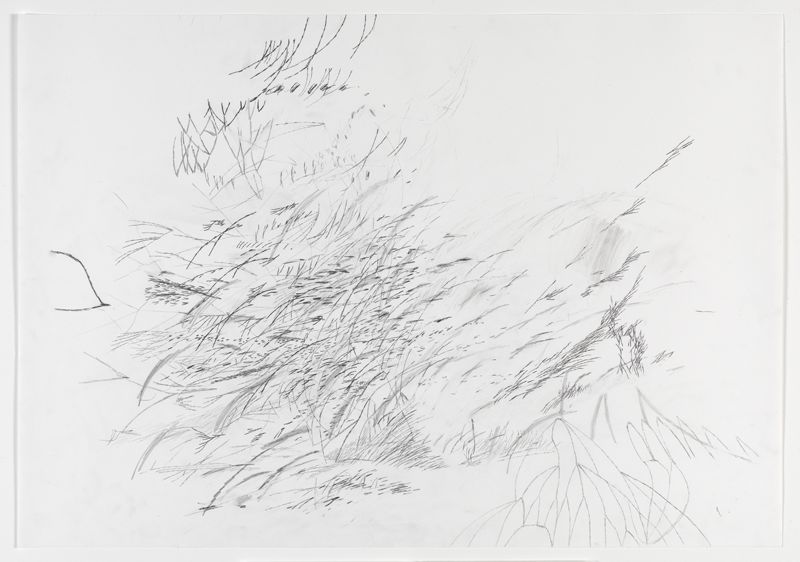 Addis Ababa born, New York based artist Julie Mehretu’s Mind Breath Drawings 2010, of which there are two works in the collection, read as remarkable graphite on paper compositional curiosities that resemble something of the ideals of early Italian Futurism gone awry. Much looser in trajectory and tone, Ababa appears to allow her mind to determine the direction of travel. And as acts of the unconscious these carpets of tangled marks appear as the register for the almost schizophrenic mind of the artist, as she challenges the condition of existing in a city. And as a consequence Ababa’s unfathomable marks read like the unguarded collision of industries of people climbing over another to penetrate the institutions they serve. For Ababa the evidential fallout becomes the “story maps of no location”. 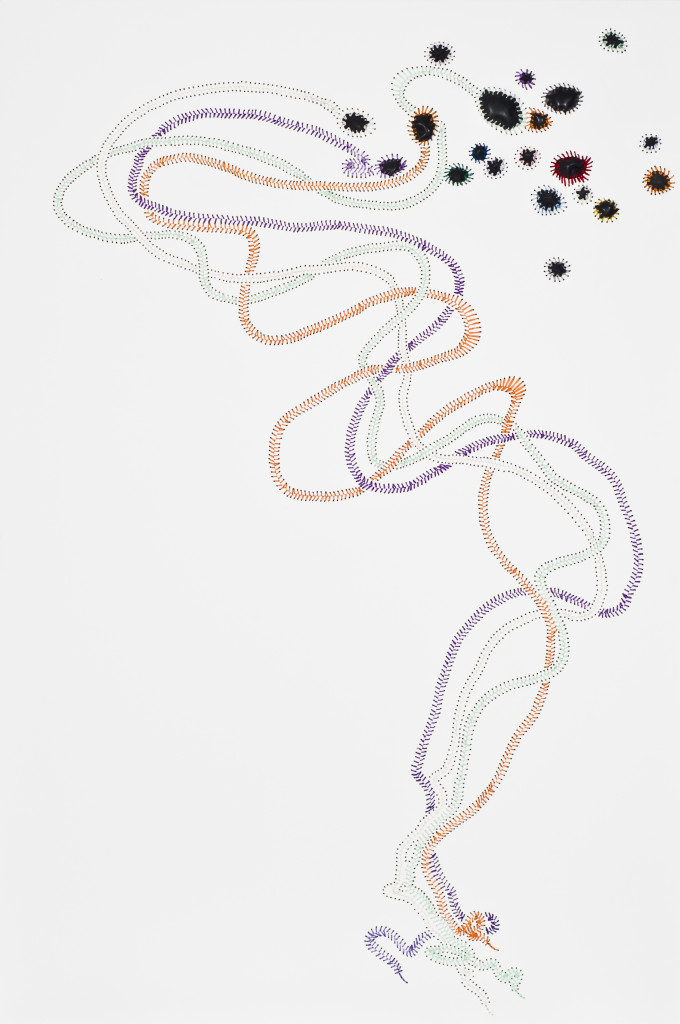 On the first floor South Africa Nicholas Hlobo’s work Amaqabaza 2012, and a second Condoba Upsheka 2012, with a third work Izichenene 2012, not on display, resemble the unidentified moving organisms that settle inside the eyelid. Hlobo applies a combination of ribbon, watercolours, and aluminum to a neutrally coloured canvas, in a haphazardly decorative attempt to create something otherworldly. That in the less coloured Izichenene appears like the trail pattern of a cumbersome microsopic creature. Applying bullet holes into the canvas from top to bottom, Hlobo threads coloured ribbon into and over the canvas, in order to create these disseminating patterns that climb up like unraveled intestine. In Amaqabaza Hlobo appears to have shaped the organic proliferation of forms with a looser combination of colours and residual tea stains, and the decorative combinations make for a series of intensely beautiful work. 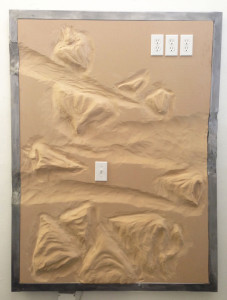 Alongside works by French Algerian Neil Beloufa’s work Sad Strawberries 2013, from the vintage series, that read like fashionable paneling for a newly designed interior. With these incongruous domestic switch and sockets applied to a steel framed MDF board that has been pummeled with a heavy duty grinder. To create these undulating gradations that appear more sand dunes than sand coloured board. And any attempt to understand this work upon closer inspection is unrewarded. Blowing 2013 is another work that is socketed up, with a wire leading to the floor, as if the induced energy that might could illuminate its register somewhat further.
With the unexhibited synthetics of Spaceship Door 2012, for which Beloufa has stretched printed vinyl over steel with bolts; Beloufa’s preoccupation with materiality demonstrates the artists accomplished ability for juxtaposing material over matter.
Rooting through this elegant house top to toe, Theo Danjuma’s collection confirms the spirit of a new kind of contemporary compositional art from all corners of the earth; that makes for a more inclusive display of works.

Rajesh Punj is a London based art critic, correspondent and curator, with a special interest in Asia and the Middle East. He has an academic background in European and American art history and curating from Warwick University, (UK), and Goldsmiths College, (UK), respectively; has on-going research and a related volume of interviews; with leading international artists, designers, curators, film-makers and photographers, due for publication in 2016. Regularly commissioned by international publications and gallerists, including Saatchi Gallery, (London), Flash Art International, (Milan), Deutsche Bank Art Mag, (Berlin), Art Paper, (Beirut), ARC, (Saint Vincent and the Grenadines), Elephant, (London), Art Zip, (Beijing, London), and Asian Art newspaper (London), among others. He has written extensively on the emerging markets, and has also curated internationally. Previously working with artists Andrea Zittel (USA), Anish Kapoor, (UK), Monica Bonvicini, (ITA), David Goldblatt (SA), Simon Patterson, (UK), Julian Opie, (UK), and Jake and Dinos Chapman, (UK), among others.