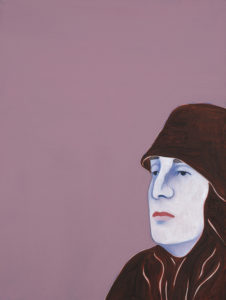 About:
French-Algerian painter Djamel Tatah makes a significant return to Ben Brown Fine Arts in London on 24 April with his second solo show, unveiling nine mesmerizing oil and wax paintings, produced over the last two years. This exhibition runs concurrently with the artist’s major exhibition at the Lambert Collection in Avignon, which explores the sensitive dialogue between Tatah’s works and those of the minimalist and classical artists of the Lambert Collection.

In these refined paintings, composed mainly of human figures and coloured spaces, Tatah represents a state of the world in the present. In these works, the artist explores the desertion of the exiles, the destruction of Palmyra, and echoes of the historical moment in which we live, though their aesthetics transcend time and geography. 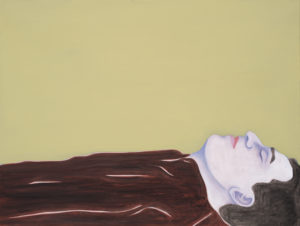 The subject omnipresent in Tatah’s works is the silent figure – the mirror of all humankind, pain, solitude, melancholy, war and peace – they are both personal and collective. Sourcing ideas from a large portfolio of images, from historically significant works of art to press cuttings, films and personal pictures, Tatah composes his scenes, placing family and friends in carefully choreographed poses which he then photographs. The digital image is projected as life size figures onto the canvas, in preparation for a long and meticulous painting process. 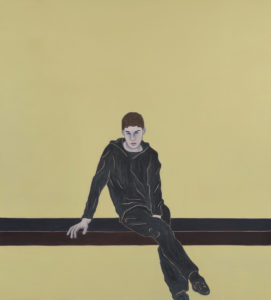 The artist notes, ‘I try to make my painting experience a shared experience, one vision that meets another. Maybe this is the beauty of art: to succeed in doing something which is accessible to someone else.’ Featured in isolation, in pairs or in repetition across large canvases or polyptychs, the silhouettes are consistently depicted in a 1:1 scale. These figures share the gallery space with the viewer in a poetic and unusual way; the paintings are hung close to the floor which implies a corporeal relation, complimented by the sculptural quality of the artist’s figures with their bold outlining and blocks of colour. They seldom face the viewer directly, instead they are found gazing upwards, downwards or far into the distance beyond the constraints of the canvas. The works have no title, bringing to the fore issues of identity. Free from any interpretation of the scene unfolding in front of him, the visitor is invited to turn to his own thoughts and actions. 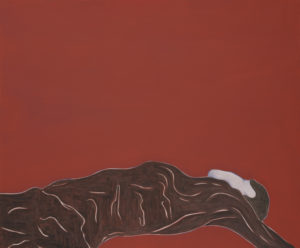 Tatah’s own pictorial invention is grounded in an ongoing exploration of culture and art from all epochs as varied as Byzantine mosaics and Piero della Francesca to Henri Matisse, Barnett Newman and Francis Bacon. Some of the artist’s most influential discoveries include the Persian and Indian illuminated manuscripts at the British Library in London. The impact of these findings are manifest in the iconographical compositions as well as the use of triptych configurations and grand canvases seen in this exhibition.