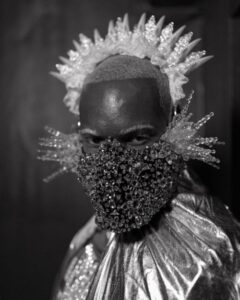 About the project
My current project ‘Opulence’ is an ode to my late brother and all people from Afro-Caribbean descent, that still are not free to live and express their sexuality to their fullest.

To this day homosexuality is strongly stigmatised and condemned within the Caribbean community. Also, Black people from the former colonies and the Caribbean islands in the Netherlands are increasingly radicalised and objectified. This project seeks to break out of this dichotomy by portraying these subjects in unadorned, raw yet graceful portraits.
During the spring of 2013 I started documenting the Ballroom scene in Amsterdam, Berlin, Milan and Paris. ‘Houses’ organise vibrant meetings that offer emancipatory possibilities of expression that relate to gender and/or race issues in a trustworthy environment where fashion and attitude mix with mutual understanding. 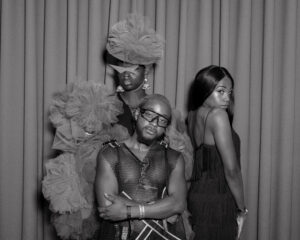 Houses provide a source of family nurturing that oftentimes a lot of kids don’t get at home. LGBTQ+ youth of color are some of the most structurally vulnerable sectors of the world population. In the contemporary Ballroom scene in the U.S and E.U., most LGBTQ+ people of color are working class or poor, and disproportionately suffer from racism/white supremacy, homophobia and transphobia, and dispossession, exclusion, and marginalisation in their communities of origin.

More specifically, LGBTQ+ youth of color are disproportionately vulnerable to unstable housing and homelessness, violence, mental health problems, suicide, substance abuse, and HIV/AIDS.
Being honest and sincere I managed to gain access to this world of wonderful and sensitive people, avoiding fears of exploitation by the sensational approach of mainstream media. The black and white photography refers to the urban underground atmosphere of the previous century. 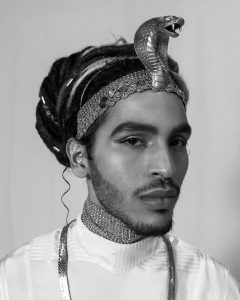 The project records my attempt to build a living archive of feelings, gender expressions and LGBTQ identities of the Black Caribbean diaspora in the Netherlands as a testimony of the vitality and longevity of the Black LGBTQ community in The Netherlands and the Caribbean. 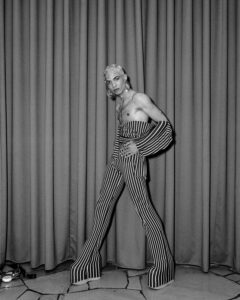 Dustin was born in Willemstad, Curaçao in 1985, and at age 14 he moved on his own to the Netherlands. His first project, Dreaming Above the Atlantic (2015-ongoing), is an intimate portrait series of people of Caribbean descent living in the Netherlands. Stemming from a personal craving to reconcile and reconnect with his own identity, the project grew into a much needed exploration of the multiplicity of Caribbean experiences in Europe. Their richness is in their intimacy; they are told from within.

His second project, Opulence (2013-ongoing), followed the suicide of his brother, a young polysexual man who dreamed of escaping Curaçao’s strictures and homophobia to follow Dustin to Europe. In his grief, Dustin began documenting the LGBTQ Ballroom scene across Europe. Through this, Dustin was imagining and experiencing the community his brother would have found if he had made it there, while finding a community for himself in the process. The project is dedicated to his late brother, and its wide ranging success is both homage to his legacy as well as a fight to beautifully make visible a resilient and inspiring community that faces relentless repression and violence. Opulence has grown into a fluid, ever-expanding, living archive of feelings, gender expressions, and LGBTQ identities across Europe. The tender portraits are unadorned, raw, deeply human and, of course, opulent.

Dustin has exhibited widely. Opulence was exhibited as part of ‘The People’s Parliament of Rojava’ (2018-2019) at the Van Abbemuseum in Eindhoven and was exhibited as a solo show at Foam Photography Museum Amsterdam (2019) and the Van Abbemuseum (2020). Group shows include: Rencontres de Bamako: African Biennale of Photography in Mali, the preeminent photography event on the African continent (2019), where Dustin was the first Black Dutch Photographer to participate, Lagos Photo Festival in Nigeria (2019), Aperture Summer Open: Delirious Cities and Labs New Artists III at Red Hook Labs in New York (2019), Photo Vogue Festival at BASE Milano, where he also exhibited at Leica Galerie (2019), and the Encontros da Imagem in Braga, Portugal where he was a finalist for the Portfolio Review Award, he also received an honourable mention for the Benrido Hariban Awarad (2020) and a nomination for the FOAM Paul Huf Award (2021). 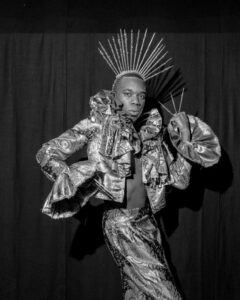 Awards include: Decade Innovation Award by the Ministry of Social Affairs and the United Nations (2017) the Selection Of Dutch Photography award (2019) of which Dustin was the first Black winner, the British Journal of Photography’s Portrait of Humanity award judged by Magnum photographers (2019), Berry Koedam Award (2020) and won the Prix des Public at the ‘35th edition’ of Villa Noailles in Hyères (2020).
His photographs have been published in The New York Times, The Financial Times, Magnum, Vogue, fluter, Blau Magazine, Glamcult, Vice and Der Greif.
He was selected by the British Journal of Photography as One to Watch (2019) and Foam Talent (2020). He was a finalist for the Villa Noailles Hyères ‘35th edition’, Somfy Photography Awards at Paris Photo (2020), Joop Swart Masterclass (2020) and The New York Times Portfolio Review (2019).
Works of Dustin are now part private and public collections of museums like; the Van Abbemuseum, Nederlands Fotomuseum.
Upcoming projects will take Dustin to Africa, Asia and back to the Caribbean. (copyright text and photos: the artist)