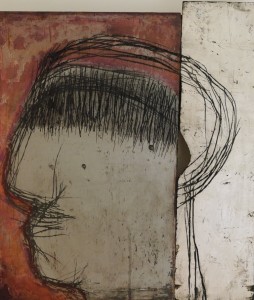 Nothing can quench the insatiable appetite of Eltayeb’s inspired, creative mind, except getting to work, whatever the mode of expression. A falafel chef, a clothing designer, an engineer of recycled furniture, and a good friend to so many, the fetching fellow keeps baring new talents, none of which fail to impress. “My works reflects who I am, my thoughts and experiences, my history and everything around me,” says Eltayeb.

When he is not scratching at wooden doors or drawers that have seen a thousand lives, Eltayeb Dawelbait entertains a stream of art lovers at his modest but enchanting studio in Parklands. If you are well behaved, he will offer you olives, Sudanese cheese and the best Arabic coffee in town. Behave badly, and the visit will take an enchanting turn when Eltayeb pops open something playful to pour in to your goblet.

His easy-going disposition and his bald-faced artistic talent have secured Eltayeb a snug spot within the swelling art sphere in Nairobi. Even staunch disciples of realism and the plein-air addicts of the Lamu Painter’s Festival have made an exception for his abstract portraits scored in to salvaged wood, with waning layers of paint escaping and new breaths of colour infused. Eltayeb’s artwork possesses a powerful energy, one that transcends its basic parts and proves, once again, that less is always more.

In the portrait series he has been consumed by these last four years, Eltayeb says he depicts the faces of the people he has encountered, past and present. Allured by old carpentry boxes and cabinet doors, each relic seems to stow untold stories and the lingering spirits of its former possessors. Adding minimalistic impressions upon these distressed tablets, either by painting or scraping at the wood, Eltayeb’s creative process complements his life story; He is engaged with a new life and the old. It is not by chance that Eltayeb’s artwork is about resurrection and the reincarnation of worn objects, all bearing hints of their former life.

Reconfiguring his existence one painting at a time, Eltayeb has carved out a nice world for himself in Nairobi over the last fifteen years. But if life is a series of paintings, his past in Sudan would be painted in a completely different palette to Kenya. Although he can boast of a happy childhood in Sudan marked by a rich cultural upbringing, a significant measure of Eltayeb’s adult life in Sudan was marked by adversity, a result of his efforts to restore higher education in the country. Eltayeb adamantly contested for the rights of students at the University of Sudan in Khartoum. Universities in Sudan are common sites for social and political activism and in the early nineties; Eltayeb was a leading member within student unions geared to protect students against inequitable educational policies enforced by government.

Unfortunately, the protests sometimes became violent, leading to arrests. Ultimately, as a repercussion of his involvement in these demonstrations, Eltayeb was exiled from Sudan, and endured a difficult stretch of life as a nomad. In 1994, he was able to return to Sudan, completing his studies at The College of Fine and Applied Arts. But limited prospects for artists combined with the haunting memories of the anguish his family and friends had endured, left a sting in his spirit and so Eltayeb migrated to Nairobi where some of his fellow Sudanese artists had already found greener pastures. Today, Eltayeb is still connected with his chums from Sudan and has regular tête-à-têtes with his old art instructor, Professor Alamin Mohamed Osman.

Eltayeb’s ‘Fragmented Faces’ are the portraits of the people that he has met on his path. For a man with such an interesting yesterday, it makes perfect sense that his technique consists of grating at wood to glimpse at its past lives. For Eltayeb, each colour of old paints on the wooden tablets marks an era in history, a different way of living and thinking. With spontaneous yet deliberate, brusque yet fluid hand movements across these old boards, it is a taxing but cathartic process. There is a pleasure and pain about Eltayeb’s work and what is most remarkable about it is how such simple strokes can convey so much emotion. 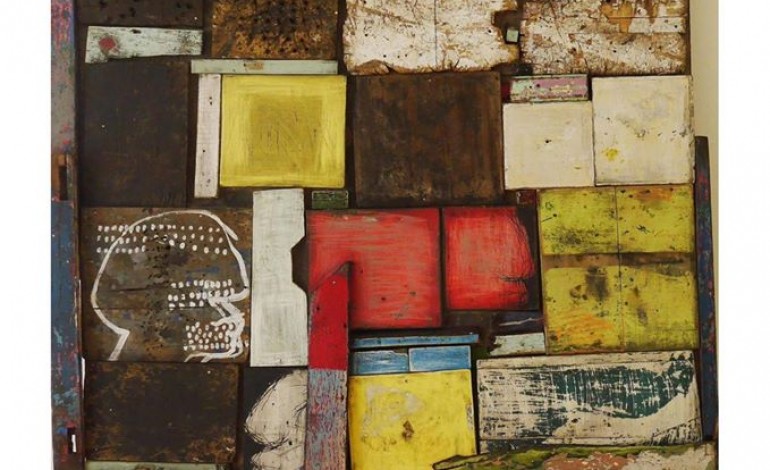 Looking closely at his artwork, ‘Image 1’ for instance, which is a montage of blocks that forms a larger square; it consists of wedges that are unprocessed, all bearing their natural abrasions. Textured very differently, each crude chunk has an innate beauty about it and it is almost as if Eltayeb adds only slight alterations to them, just to draw attention to the stories that the wood itself wants to tell. Even with his more straightforward portraits such as ‘Image 2’, Eltayeb never applies thick layers of paint that would conceal the marks in the wood. Like with figure drawing, he uses light quick gestures to etch the heads and deeper grooves to delineate the prominent noses and dramatic mouths of Eltayeb’s fragmented faces. 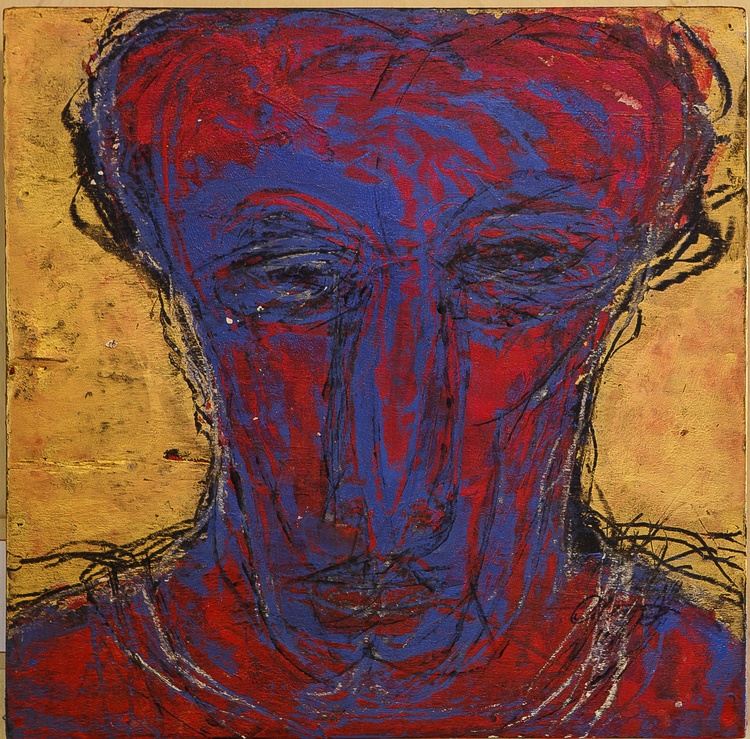 Walking into the Red Hill Art Gallery, one might say that Eltayeb’s exhibition is a little repetitive, with too many of his portraits gazing in the same direction. Is could be perceived as a case of too much of a good thing, where the sheer quantity of portraits might make the spectator feel as if they haven’t seen anything special or rare. But this is hardly the case. Eltayeb’s portrait series has received a lot of attention and it continues to be in high demand. Although the series has run a long time, it hasn’t quite yet run its course. 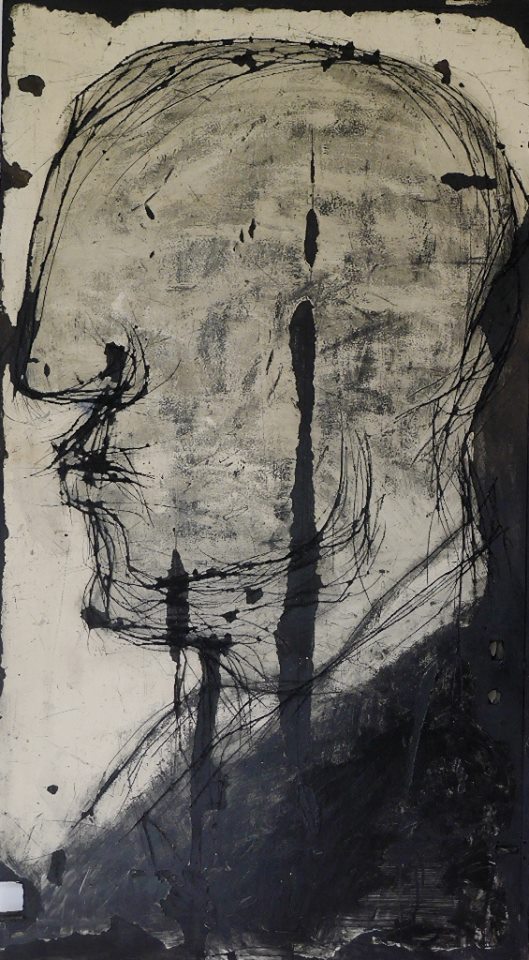 Every piece of Eltayeb’s artwork has its idiosyncrasies. Creations such as Image 3, break the perceived monotony for those prone to complaining. Some of the works at his current exhibition have been painted in a more a vigorous palette than usual and a few of his portraits have even graduated to full-figures painted on long doors. And again, Eltayeb keeps his portraits feeling so organic that it is difficult to tell which divots he has notched out himself and which ones are part of the natural decomposition of the wood; the new and old thrive together seamlessly.

Eltayeb’s artwork earned its wings in 2003 when it globetrotted to a solo show at the TAD Gallery in Rome, followed by group show at Ensign Gallery in London in 2004. He exhibited at the Toronto Art Fair in 2006, the Monaco Art Fair in 2010 and the Gazambo Gallery in Madrid in 2013. In Nairobi, he is most known for his colossal 2013 commission of portraits on old carpentry boxes, stacked sky high, at the PwC Towers. His sculptures were auctioned in the 2013 and 2014 Modern and Contemporary East African Auctions in Nairobi organized by Circle Art Agency. On May 20th, Eltayeb’s painting ‘The Body’ made it to the Bonham’s Africa Now 2015 auction in London (Lot 80, US$ 4,700 – 7,800).

Nothing can quench the insatiable appetite of Eltayeb’s inspired, creative mind, except getting to work, whatever the mode of expression. A falafel chef, a clothing designer, an engineer of recycled furniture, and a good friend to so many, the fetching fellow keeps baring new talents, none of which fail to impress. “My works reflects who I am, my thoughts and experiences, my history and everything around me,” says Eltayeb about his latest exhibition where almost half of his artworks already bear a red sticker.

Yet to be addressed is why Eltayeb’s portraits of so many different people look so similar. Is he making a point about the oneness of the human spirit, the fact that we have more in common than we think? Or is it that the seemingly similar scratches, scores and scuffs in the wood are subtly different, in a way that only the most intuitive of us can discern? Eltayeb continues to intrigue us with ambiguous portraits that are a paradox and an enigma.

Eltayeb Dawelbait was born in 1968 in Kosti, Sudan. He currently lives in Nairobi, Kenya.