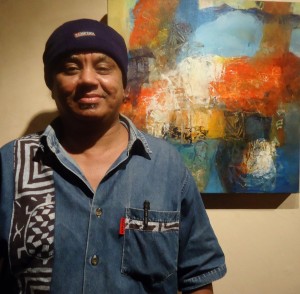 If you listen to the lyrics of ‘Mysterious Ways’ by rock band U2, one interpretation of the song that could work is that it is a description of the artist disposition. “Let her talk about the things you can’t explain,” it states. “She’s the wave, and she turns the tide. She sees the man inside the child” The famous chorus goes; “It’s alright, it’s alright, and it’s alright. She moves in mysterious ways.”

Artists will certainly show you things you can’t explain. They turn the tides and change our perspective. They can see things others will not, and, they will be always being bit of a riddle to regular folk. Sudanese artist Hussein Halfawi fits this profile perfectly. After falling under the radar these last seven years, he has reappeared on the Kenyan art scene with cryptic paintings and an engrossing story. He sees, shares, and shows you things you do not expect. He moves in mysterious ways.

Halfawi reemerged at Talisman Restaurant in Karen, Nairobi on Tuesday October 7th with an untitled exhibition of twenty-four paintings inspired by his Nubian heritage. Growing up in the Northern state of Wadi Halfa, Sudan, the artist describes his formative years. “I am from the Kingdom of Kush, an ancient kingdom along the Nile. I grew up around wall-paintings, made from paints from the earth. Our houses in Wadi Halfa were full of art and decoration: plates to ward off evil eyes, stuffed crocodiles from the Nile, animal horns and paintings. I grew up in a very inspiring atmosphere.” 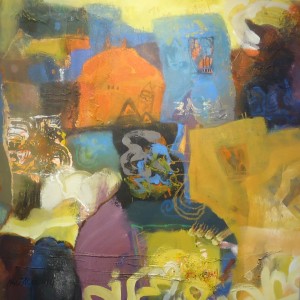 Hussein Halfawi came to Kenya in July 1997 to move away from the events of the second Sudanese civil war. Having commenced his training in the Industrial Design department of Fine and Applied Arts at the University of Khartoum, he left the university when the new totalitarian National Islamic Front (NIF) besieged his department as well as the College of Music and Drama. “That’s when most creative people left Sudan,” says Halfawi.

“There was a crackdown on art and artists,” he explains. There was no room for expression anymore. Artists were restricted by what they could paint. Statues considered ‘un-Islamic’ were destroyed and artists were forbidden to draw figures anymore. Art was only allowed if it was a homage to Islam, usually using calligraphic text from the Quran or repetitive Islamic patterns. This ‘Islamification’ of art meant there was no room for Sudan’s cultural diversity and it’s ethnically inspired art.

Halfawi joined the Sudanese artists who had moved to Kenya before him. Contemporary artist Ahmed Abushariaa (now a big name with collectors of East African art), Izz El Din Kojor, Ahmed El Sharif and Hassan Fadul Abbakar had found a small but growing market for their artwork in Nairobi. Halfawi moved to South C, the southland area of Nairobi, where the tiny enclave of Sudanese artists resided together. He was good friends with El Tayeb Dawelbait (a rising star on the contemporary Kenyan art scene), Issam Aboud and Salah Ammar. In the natural ebb and flow of artists, Aboud, El Shariff and Kojor left Kenya while Yassir Ali, Fatima Hassam and Fawaz El Said floated in.

Hussein Halfawi began at Paa Ya Paa Gallery and other places in Nairobi. Later, his artwork travelled to Uganda, Tanzania, Canada, and the UK. Originally inspired by his mother’s paintings when he was young, Halfawi’s influences are now multifold and his work has evolved with time. 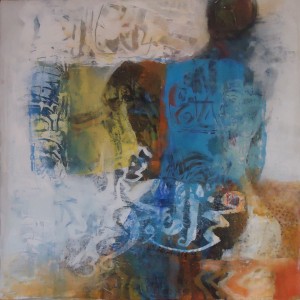 With a potent palette of powerful reds and ochre contrasted against cooler grey, blue and white, Halfawi uses mostly acrylic but sometimes mixed-media to produce multi-layered abstract paintings on canvas. When you zero in on his artwork, elements of Nubian iconography are washed over in lightweight paint and sometimes even dainty, gauzy cloth. Misty films of color overlap each other, abstracting the strange entities underneath. Both Nubian and Arabic influences can be detected.

In his ‘Painting 24’ you see what looks like a human form (on the right) with a rounded head and shawl-covered body, obscured by layers of something that looks like letters from Arabic script, but not, and then a layer of cursive shapes and intricate patterns resembling Islamic art..
‘Painting 1’ has a perky palette. The bright orange hut on the top left draws your eye. It looks like a jumble of living quarters; huts and houses in a palette of purples, blues, oranges and more. It makes you think about how Halfawi’s many homes, all different, none permanent, and all in different places. With so many structures, colors and influences, one swathed by the other, it is clear that Halfawi has lived many lives.

The last time he exhibited at Talisman was in 2009. Since then, he tells us he has shown at Tulifanya Gallery in Uganda; with Lina Haggar at the Dabanga Gallery in Sudan and; at his solo exhibition Soul Revolution in 2012 at the Cultural Heritage Centre in Arusha, Tanzania. He has been assisting young Southern Sudanese writer Stella Gitano, with all the illustrations for her book of short stories.
In 2007, Halfawi joined the Sudan Radio Service funded by USAID. On radio, he discussed the political conflict in Sudan. Later, he became Executive Producer of the show but due to lack of funding, the station closed down last year. Halfawi has decided to go full force as an artist again.
If there ever was a universal truth it would be that artists will return, or will yearn to return, to their creative state. For some of us there is no homecoming. For others, we dabble. For the lucky ones, we make it back home. We all move in mysterious ways.