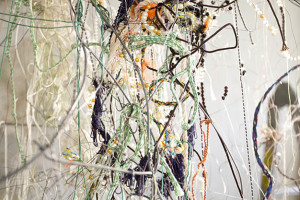 Using found material to make statements about the intimacy between sexuality, religion and race Adams’ oeuvre renews our interests in topical subjects in ways that beckon us to pay attention to subtly sustained institutionalized bigotries and discontinuities.

Oorskot is Igshaan Adams’ third show at Blank Projects. Oorskot is an Afrikaans language term that is translated to mean residue, debris, discarded materials – junk. That which in essence is lifeless. As the title suggests, Adams show pertains to the materiality of these “things”. More so invites us to ponder the question of their mortality and the general contingency of the notion of value. It poses the question: can things devoid of axiological purpose be rechargeable? Can objects turned into a pile of waste – even the incinerated – be revitalized back into something dynamic?

The word “junk” has a deep and old history in art practices in south Africa. And it seems that the contemporary art practice has also followed up on it. Yet in spite of the commendable creative imperative by black artists, making art with found objects under harsh circumstances, and beyond the exoticization of it, there’s always been an ominous silence and reluctance to speak on its deep presuppositions. 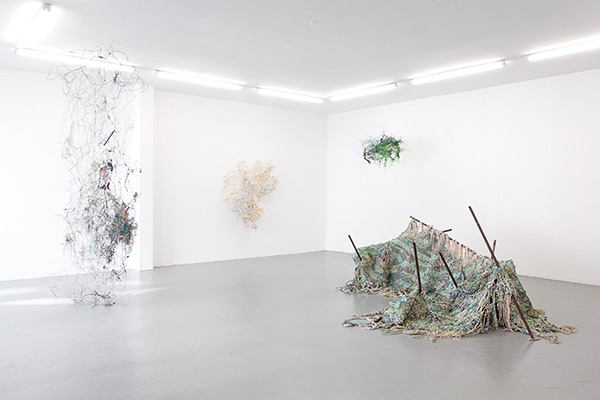 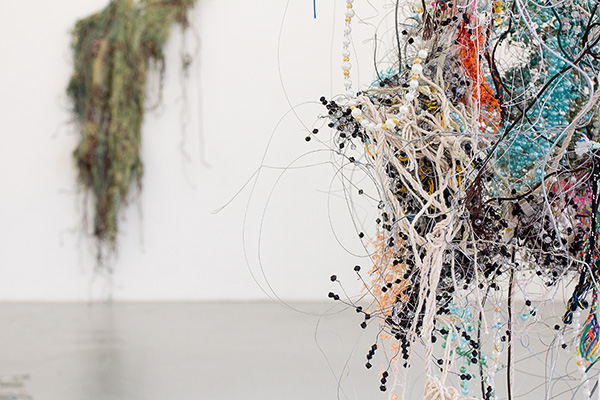 The proximity to and use of “junk” by black artists always indexed the social scandal of loss, deprivation and exclusion that haunts black life. That is the nearness to waste, to the stink of one and others’ excrement, to the polluted and unhygienic, and finally to death itself gives expression to what theorist Jared Sexton once called the  “thanatological dead end” of black existence. That is to mean an inextricable relation between blackness and valuelessness. Certainly it wasn’t simply Duchampian choice to make some grand statement about  art production. But it also speaks of resilience or refusal to capitulate to circumstances of deprivation and social condemnation of the potentiality of black bodies.

Using found material to make statements about the intimacy between sexuality, religion and race Adams’ oeuvre renews our interests in topical subjects in ways that beckon us to pay attention to subtly sustained institutionalized bigotries and discontinuities. Adams never seemed to care much about where he places his objects in the gallery space. They could be dangling, sprawled on the floor or even the wall. Every space is potentially colonizable, and in the current show the same method returns. The show makes use of the floor, ceiling and wall as if it were a place engulfed by leprosy. In Oorskot the artist seems to take a more abstract and formalistic exploration of the medium, stretching his materials beyond their basic recognition and functions. The point, unlike in his previous works over populated by recognizable tropes, it seems, is not loaded with content external to the used wretched material, but that content emerges from the very material itself. These materials include ropes, strings, mild steel, fabric, scarfs, cloths, beads and so on. They become both the content and form, both object and subject. This openness of beautifully rendered complexity with the deconstructed and charming wretchedness, permits us to make a variety of presumptuous commentaries. That is also when we refuse to be simply sedated by their beautiful and intricately woven construction. 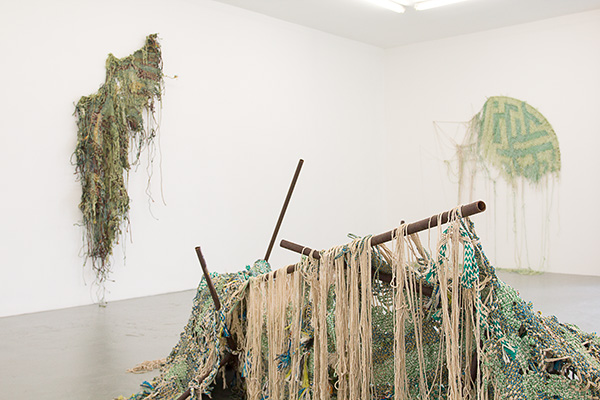 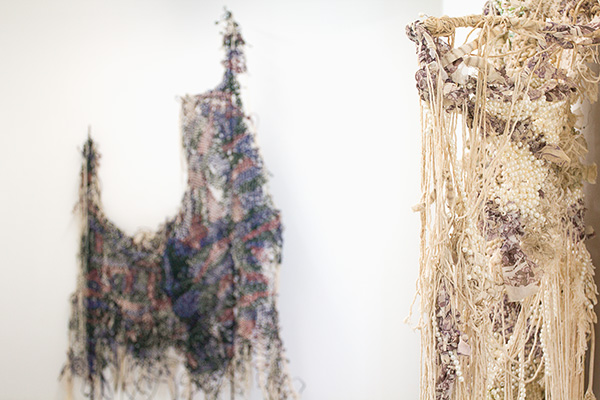 However these constructions do bear the resemblance of his old tapestry works, albeit now as ragged and torn representations of them. If anything the exhibition itself gives off the atmosphere of an aftermath, a moment after a disaster that left “things” in tatters, a ruined surplus.  And this is probably were the twist begins. There’s a sense of permanent shifts, contradictions and cycles. Consider pieces like Stotlike Oorskot on the floor or even Groen Amara on wall. This consideration seeks not to make them exceptions but to draw attention to the formal detail. The motif of the tapestry is there but with faint hints of the usual oriental sensibility and colouration displaced by the emergence of what normally lurks hidden and beneath. It is also this distant resemblance that brings all the curiosity and questions.

What is Adams point in taking discarded material to create objects that simultaneously appear wretched while beautiful? From reconstructing mats to shredding them, Adams makes a clandestine invocation of his known thematic interests, via a different route. Now as debris of what they used to be, Adams’ mats appear as aging and rotting. The interest in residue seems like it isn’t simply on the potentiality of found material but also a portrayal of residue itself. So residue refers not to just materials picked up and turned into aesthetic objects, but also the paradox of how the object itself reproduces itself as discardable – oorskot. The idea of these potentially Islamic prayer mats represented as torn up, as if residue after an explosion, could be an interesting allusion to the ongoing acts of religious fundamentalism. Is this a bomb blast scene or portrayal of a wretched life? 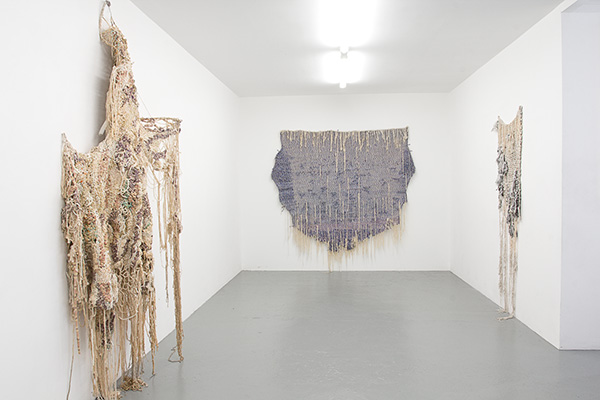 One is tempted to momentarily make other curious visual associations here, that is between Adams’ Oorskot show and Kanye West’s controversial and pricey fashion range of torn clothes called Yeezy. The rapper-cum-designer’s new range, more than the pretension of making an avant garde fashion statement, was a typical self-gratifying petit bourgeois aestheticism that appropriates a social calamity for his private accumulation. Or put differently, there’s a latent fetishization of poverty in ways that fixes and normalizes experiences of deprivation into “cool” aesthetic excesses as late critic Gerhard Schoeman would have it. After all as critic Brian Holmes once said, there’s no picture that titillates the global art scene than the picture of poverty and poor people. This “poor image” once referred to by Hito Steyerl has become the amulet to aid the privilege find their peace and assuage their guilt. This isn’t to say Adams’ Oorskot self consciously animates this trend but that his work, in its ability to stretch and open itself into an array of questions and concerns, while at the same time inviting us to feast in its creative and meticulous handle of the craft, has many layers. Some good and some dodgy. But Oorskot is certainly a show to see and Adams a young artist to keep watching out for.