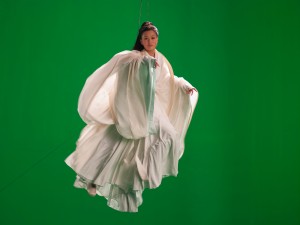 “Isaac Julien wanted to show how the art world is functioning as a capitalist venture. So from hedge fund manager, to auction and even the cleaning lady that works for an art collector, they are all working in a way within the art world, although its mechanisms could easily be stretched to fit a more general model of society. However, the characters lack relief. Even in their enthusiasm or grief, they are stuck in their role as an archetype in the story of capitalism. That fact alone causes a distance between film and viewer. ‘Playtime’ is too much of a sketch, instead of a forceful story.”
Machteld Leij on ‘Playtime’ of Isaac Julien.

NOT A STRONG STORY, JUST A FLAT SKETCH 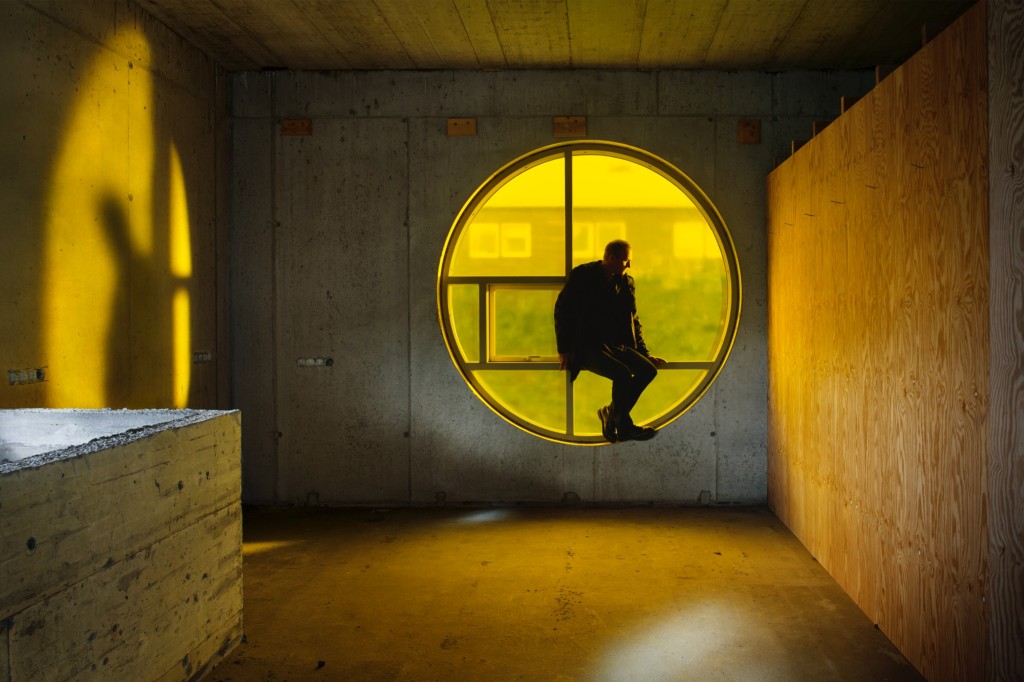 Isaac Julien’s cinematic installations engulf his public, surround them, and sometimes even seem to hug them. It is an invitation to submerge into his films. And so, despite of the huge screens his films are projected on, the sense of intimacy is an important element of his films. Even though the characters keep their distance, as they wander through natural landscape or architectural structures. The British filmmaker is exhibiting his latest work ‘Playtime’ in Museum De Pont in Tilburg, The Netherlands. On seven screens, he introduces us to a few people in his life. Sometimes they are his friends, sometimes it’s an actor. And in a few cases, they are both. Their stories, their hopes and despair, the wish to make money, in bucket loads or just enough to feed their child that lives far away with their grandparents. 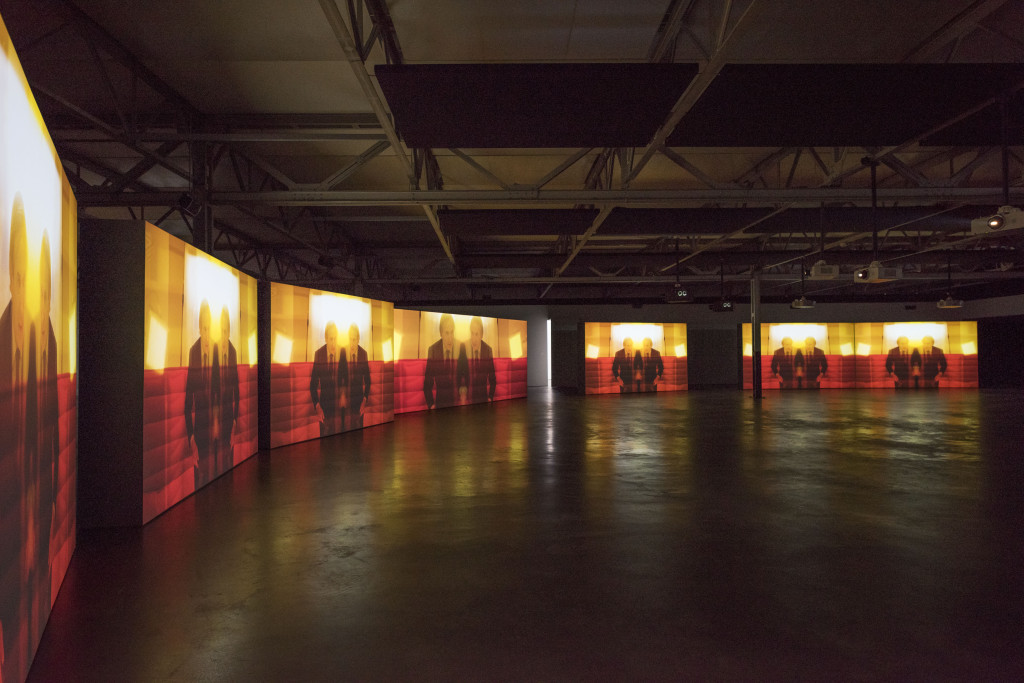 ‘Playtime’, named after the film of Jacques Tati in which the protagonist struggles with modern life and progress, seems under the hands of Julien to do the same: showing its protagonists wrestling with the need for capital and goods, with the market economy, and with the effects of the downfall that started with the crisis in 2008. So it’s not a coincidence that one of the characters is an Icelandic artist, loosely based on someone Julien knows. As a ghost he wanders through Reykjavik, and through the empty, unfinished shell of his house, never to be finished. In London, we see the other side of capital: Hedge fund businessmen are discussing the market economy, while in the background the Gherkin blinks ravenously. The trumpet player in the middle of an empty floor provides a streak of surrealism. The art collector embodied by Hollywood actor and wannabe artist James Franco mulls rather enthusiastically how the value of the art works can change. In real life, the exhibition around him was curated by both Franco and Julien. Then, a wee bit later, an auctioneer tells us about his little rituals before an auction. He looks amazingly lifelike; his joy in his work seems genuine, not ironic at all. That is not a coincidence as the auctioneer is actually playing himself for Juliens camera.
Life is a bit harder for those that have no means, as a housewife, working in Dubai shows us. Her life looks hollow, she is displaced, she has to trade her work power for money and in this exchange, and she draws the short straw. There we follow a housemaid, travelling in an unmanned railway carriage, in a city that looks too big, too gleaming to be comfortable.
So in the end it’s all about money. And somehow this narrows the impact of ‘Playtime’ down. As it is of course a sign of the times we live in, this criticality towards capital and the market, towards the huge difference between those who are able to buy anything they like and those who are adrift and searching for means to live. It is, in a way the same theme he so beautifully executed in ‘A Thousand Waves’ (2010) the installation in which Julien interwove fictional, mythical narratives with the gruesome real life history of the Chinese migrant cockle pickers who lost their lives at Morecambe Bay in 2006. 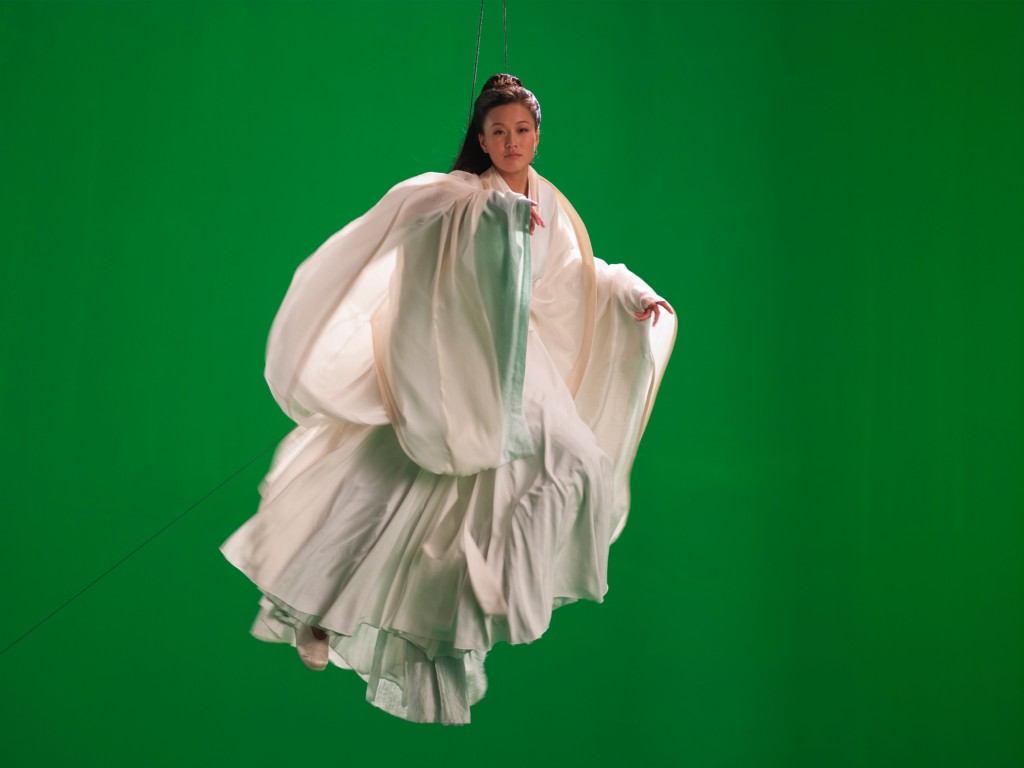 ‘Playtime’ consists of similar ingredients: loved but lost are the people in search for a better life, in a Diaspora fuelled by economic and political forces. But in his recent work the characters are too anecdotal, too hastily sketched to really make a lasting impression. Although it is a whirring experience to watch the installation, it is mainly the medium and the cinematic experience that tends to catch your breath, than the message. It is a good thing that Julien chose to fictionalise several personal stories, as to create a multi-layered unity, that isn’t too obvious. He wanted to show how the art world is functioning as a capitalist venture. So from hedge fund manager, to auction and even the cleaning lady that works for an art collector, they are all working in a way within the art world, although its mechanisms could easily be stretched to fit a more general model of society. However, the characters lack relief. Even in their enthusiasm or grief, they are stuck in their role as an archetype in the story of capitalism. That fact alone causes a distance between film and viewer. ‘Playtime’ is too much of a sketch, instead of a forceful story. Stating inequality is in itself not convincing enough, especially as so many artists are pondering the long term effects of capitalism and the free market.
Still, ‘Playtime’ has a fighting chance in De Pont, where it is shown from floor to ceiling, on seven screens. This is due to the cinematic splendour of sweeping images that are Julien’s trademark. Alas, its serious component, ‘A Thousand Waves’, is shown in an incarnation only on one screen, titled ‘A Better Life’. So there is no chance of over staging ‘Playtime’. So, beauty has to serve as commentator on people and their surroundings that are linked to art as capital, growth and the accumulation of capital and goods. It does succeed in doing that, but not as effective as could be.
De Pont shows in addition to still photography, other cinematic works, in which his protagonists seem to wander around in a world that could be their natural habitat, or at times leaves them estranged as is the case in ‘Playtime’. For instance in ‘True North’ Julien puts a black person in an all white environment: the snow white landscapes of Iceland. She wanders all dressed in fur through a white landscape, while a voice-over whispers words from the account written by Matthew Henson, the first black explorer, who went in 1909 to the North Pole in the company of Robert Peary. Dislocated perhaps, there is a sense of the explorers victory, as the woman reaches the beach dressed in a free flowing, white dress. 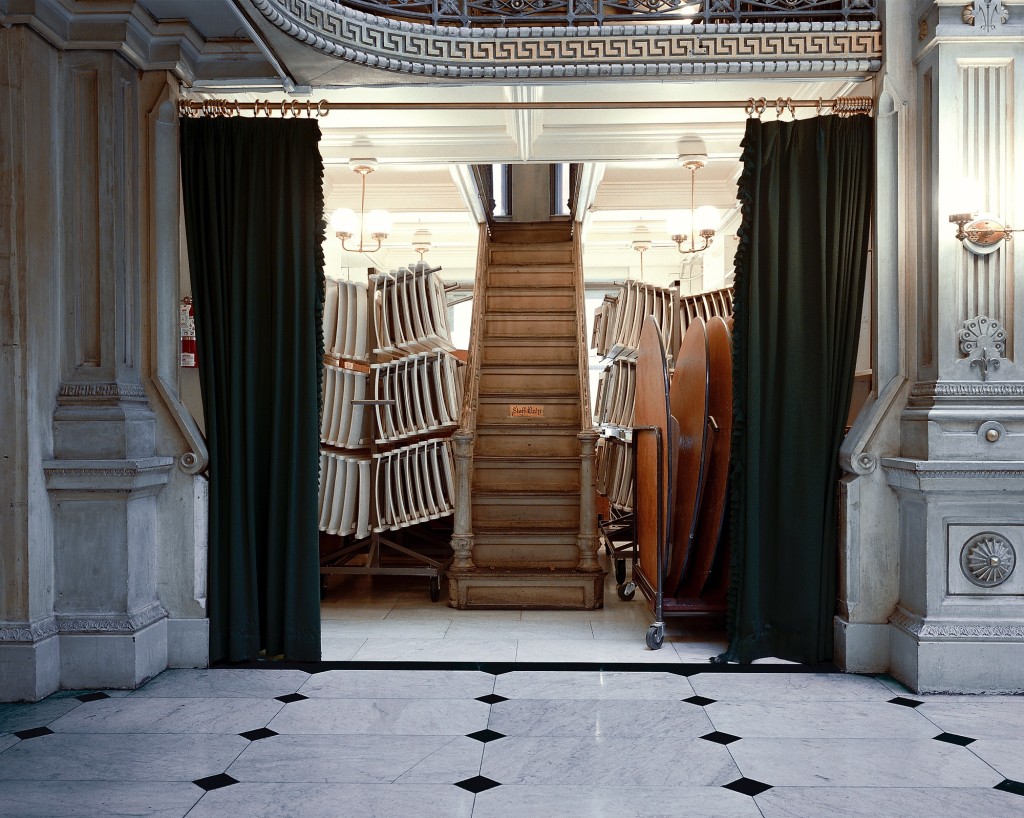 Such is the case in the film ‘Baltimore’. Actor and director of Blaxploitation movies Marvin van Peebles sets out in the city to meet himself in the museum as a wax figure. Wax statues from the Great Black in the Wax Museum have found their way to an art museum: they are grouping around works of Piero Della Francesca in the Walter Art Museum. Julien puts statues from the Baltimore Blacks in the Wax Museum as public, ogling the Renaissance paintings. And that’s exactly where we can see alien cyborg, vaguely looking like political activist Angela Davis, flying triumphantly through the library, landing firmly on high heels. That feel of triumph, in combination with elements that call to mind Sun Ra’s Afro-futurism – science were to bring possibilities for black people to start anew in outer space, free from racist society – makes this film into a playful comment on prodding the powers-that-be. 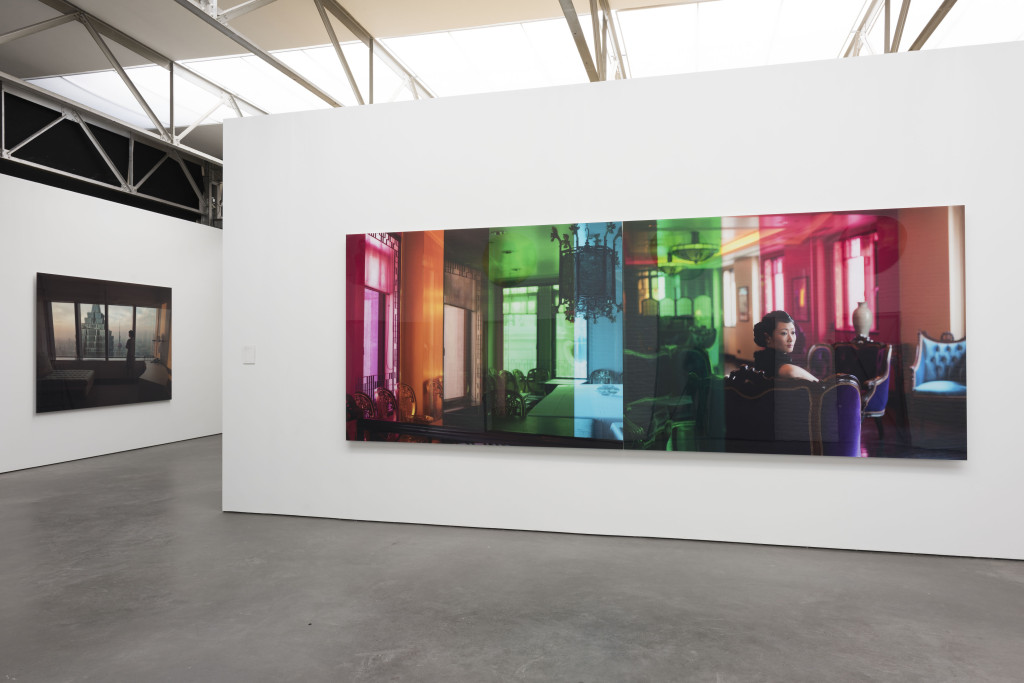 Isaac Julien is a filmmaker and a visual artist. His artworks all benefit from his experience as a filmmaker. Fragmented stories are interwoven, quite beauteous and intelligible. Choosing often for more than one perspective, allows him to sketch deficit alongside resilience, all influenced by forces that can bring about rather inhumane effects. ‘Playtime’ does fit neatly into that categorisation. Even though it is less provocative, too obvious at times. Perhaps a reason for that is that Julien based all the characters on people in his surroundings. That of course makes it personal, small scale, realistic. But Julien excels in adapting histories and mythologies that seem on occasion to be slightly larger than life. This particular choice of material sharpens the meaning in his work, even though in the end it’s all about the individual in a tight spot, wandering literally on screen in an attempt to find a way out.

Machteld Leij is an art historian from Leiden. She works as an independent writer and critic. She publishes in several magazines in and outside of The Netherlands.

See also posts in archive Africanah.org, among others about ‘Looking for Langston’ of Julien. 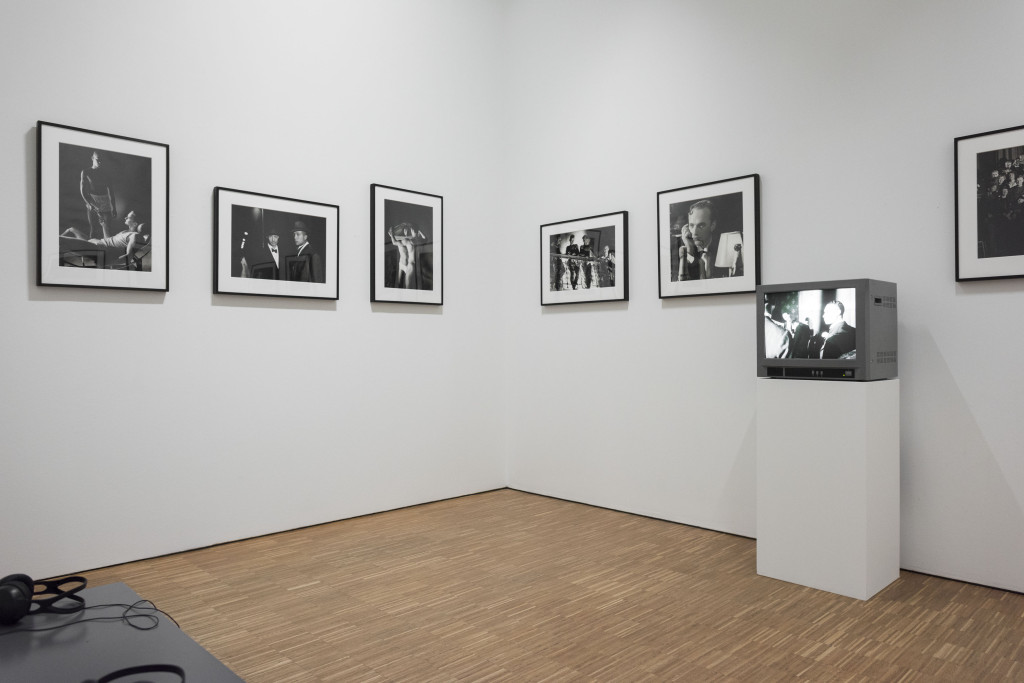