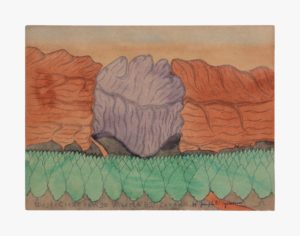 About:
(New York, NY) – Venus Over Manhattan is pleased to present Joseph Elmer Yoakum, an exhibition comprising more than sixty works on paper by the visionary American artist. On the tails of his inclusion in Lynne Cooke’s “Outliers and American Vanguard Art,” the presentation marks the largest group of Yoakum’s work assembled in New York since 1972, when the Whitney Museum of American Art staged a solo exhibition dedicated to his work. In conjunction with the presentation, the gallery will publish a major catalogue featuring a new text on the artist, archival material, and contributions from the Art Institute of Chicago, the Roger Brown Study Collection at the School of the Art Institute of Chicago, Intuit: The Center for Intuitive and Outsider Art, The Museum of Everything, Jeff Koons, and KAWS. The exhibition will be on view from June 20th through July 26th, 2019. 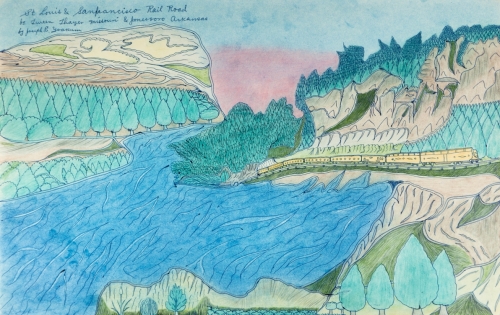 An artist of African American and Native American descent, Joseph Elmer Yoakum made drawings that describe a life spent traveling, first with the circus as a young man, then with the army during World War I, and later, alone hopping train cars in the American West – all before settling in Chicago, where he committed to a life of art making around 1962. A set of competing narratives seeks to account for the details of his life: per official documentation, Joseph Elmer Yoakum was born to John Yokum (a previous spelling of the family name) and Frances Wadlow on February 20th, 1890, in Ash Grove, Missouri. But according to Yoakum, he was born in 1888, “near the village of Window Rock, Arizona, in the Southwest territory before it were [sic] made the Navajo and Apache Indian reservation.” He often claimed Navajo heritage, referring to himself as “Na-va-JOE,” but his Native American heritage can rather be traced to the Cherokee Nation, through both of his parents. Many aspects of his biography remains similarly uncertain – such as his time spent traveling with the Ringling Brothers Circus, or his role as a billposter for Buffalo Bill Cody’s Wild West Show – and contribute to a picture of his life that rests between myth and fact. 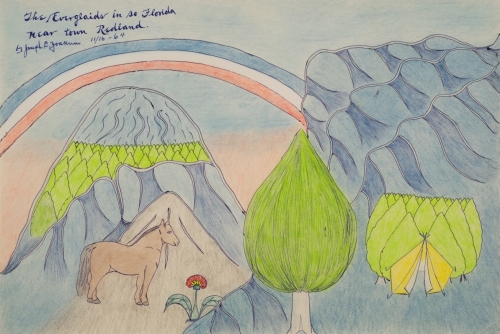 The Everglades in So. Florida near town Redland, 1964

Yoakum first settled in Chicago in the late 1920s, where he spent some thirty years working as a mechanic, carpenter, and railroad inspector, before dedicating his life to his art around 1962, at the age of 72. Yoakum relocated to a storefront on Chicago’s South Side in 1966, where he began the most productive period of his career. It was during this time that Yoakum developed his mature style: characterized by a densely patterned and radically flattened approach, Yoakum’s drawings often feature brightly colored geographies, gently moving streams, and complex layers of receding trees. Yoakum claimed to have traveled to each of the locations he drew – locations often denoted by a specific title in the top left quadrant of the page, much like a picture postcard – and that he pulled his compositions from memory. Though many expressed doubts about the truth of his claims, one of the artist’s biographers, Derrel B. DePasse, found that Yoakum had indeed visited may of the places his drawings depict. 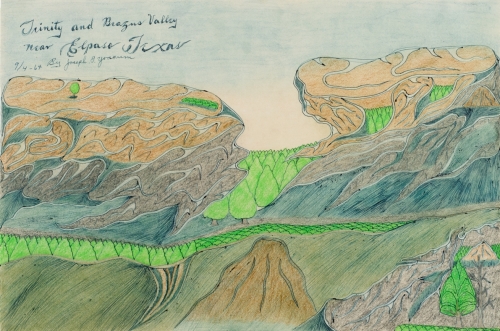 John Hopgood, an instructor at Chicago State College, happened upon Yoakum’s studio in 1967, and immediately recognized the quality of his work. Hopgood organized Yoakum’s first show at The Whole, a coffee shop in the basement of St. Bartholomew’s Church of Englewood, and secured him representation with the Edward Sherbeyn Gallery, which staged a second exhibition of his work in 1968. This exhibition caught the attention of Whitney Halstead, a professor at the School of the Art Institute of Chicago, who became Yoakum’s greatest champion. Halstead’s students at the time were a group of artists who came to be known as the Chicago Imagists, and included Roger Brown, Gladys Nilsson, Jim Nutt, Ed Paschke, and Christina Ramberg, many of whom championed, collected, and drew inspiration from Yoakum’s work. Indeed, as Roger Brown described, finding Yoakum “was like finding [Henri] Rousseau in our own backyard.” Yoakum’s success ballooned from there, culminating in a major solo presentation at the Whitney Museum of American Art, curated by Marcia Tucker, which opened just a month before Yoakum died. 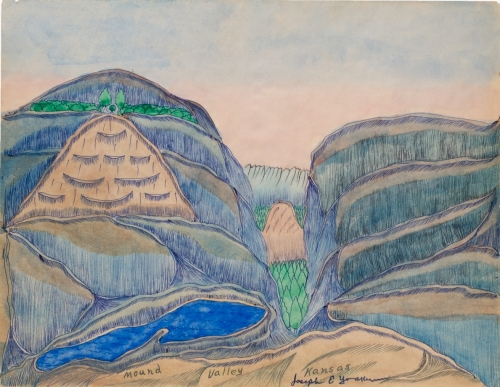 ABOUT JOSEPH ELMER YOAKUM
Joseph Elmer Yoakum was, according to official record, born in Ash Grove, Missouri, in 1890. His work has been the subject of numerous solo presentations, including exhibitions at the David and Alfred Smart Museum of the University of Chicago; Intuit: The Center for Intuitive and Outsider Art, Chicago; the Art Institute of Chicago; and the Whitney Museum of American Art, New York. Yoakum’s work is frequently featured in major group exhibitions, including recent presentations at the National Gallery of Art, Washington, D.C.; the Carnegie Museum of Art, Pittsburgh; the Museum of Modern Art, New York; and the Philadelphia Museum of Art, Philadelphia. His work is held many public collections, including the Art Institute of Chicago; The Menil Collection, Houston; and the Museum of Modern Art, New York. Joseph Elmer Yoakum lived and worked in Chicago until his death in 1972.