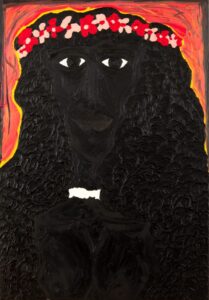 He decides to make series of portraits of black men, heroes, courageous soldiers, sometimes also influential women, who lived in a time or operated under circumstances in which their blackness had no negative connotation. Figures that are wrongly missing in the canon.

Rob Perrée on the work of Kenneth Aidoo.

Kenneth Aidoo (1988, Dutch, Ghanaian parents) describes the Dutch cultural climate for black residents, especially black artists, with the term Black Renaissance, because he signals a growing interest in what they are doing presently as well as in the past.

That same characterization was used by Harvard professor Henry Louis Gates in a 1994 article in Time Magazine to describe the revival of black culture in the United States. According to him black artists, writers and musicians increasingly attracted attention and gained easier access to the stronghold of white culture. Artists like Kara Walker, Henry Taylor and Kerry James Marshall, for example, acquired gallery representation that allowed their careers to take flight. That was unthinkable before.

Ultimately, the artistic and commercial success of that generation led to the massive increase in exhibitions and appointments of black artists and curators that have taken place there over the past years.

Whether Aidoo is too optimistic remains to be seen, but his general attitude – I try to evoke empathy – and the constructive thematic that forms the basis of his work, give us hope. 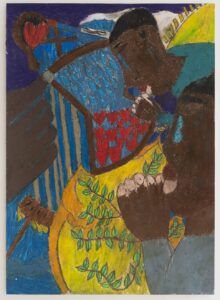 Kenneth Aidoo started his education at the Dutch Film Academy in Amsterdam. His attention was mainly focused on writing stories, screenplays. The immediacy and freedom of drawing and painting were an important reason for transferring to the Rietveld Academy in Amsterdam. That immediacy is after all impossible if you want to make a film. Telling a story – an important need of the artist – can also be done with a brush and pastels.

At the academy and for some time afterwards, he primarily made narrative works, pastel drawings, scenes that refer to his personal (love) life, his relationship to his immediate environment. He does not shy away from symbolic imagery. The works gave me the impression that Aidoo is searching. They still lack a clear direction. 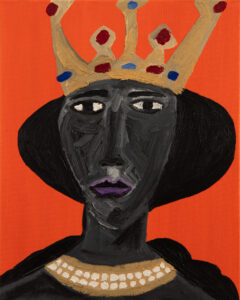 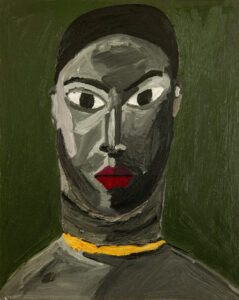 He seems to have found it a few years later, after intensively delving into black history and absorbing the relevant literature.
He decides to make series of portraits of black men, heroes, courageous soldiers, sometimes also influential women, who lived in a time or operated under circumstances in which their blackness had no negative connotation. Figures that are wrongly missing in the canon. Racism was not (yet) an issue. The color line did not exist. They could be free. In antiquity, the Middle Ages, during the First and Second World Wars, they could be who they were. Sometimes he names them – Alessandro de Medici, Nefertiti – as if to prove their right to exist. The viewer will never know who the others are. Aidoo says in an interview that an existing character stimulates his imagination in such a way that he can fantasize the other characters in the series. In other words, the portraits symbolize a phenomenon, an idealized world. It’s not so much about who they are, but what they represent.

The Kente series seems to deviate from this concept. They are portraits of Ghanaians wearing a Kente, a royal fabric, with geometric patterns in all kinds of colors, colors that each have a symbolic meaning. The men and women depicted can show their identity without being restricted in their freedom. Their royal status, their character can be read from the patterns of their Kente. Their faces may therefore be missing. 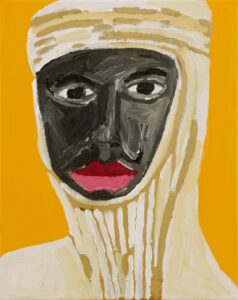 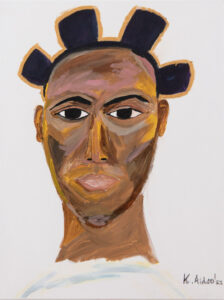 Aidoo’s portraits are not realistically painted. They are often angular, cubist, simplified. The colors are bright. His black is deep and intense like Kerry James Marshall’s black. The paint is thick and applied in large strokes, making the works tactile. The eyes are striking. They look at you penetratingly and therefore make the portraits lively and the viewing experience emotional. The backgrounds are mostly monochrome. They enhance the sence of depth. Aidoo himself claims to have been influenced by Jean-Michel Basquiat – by his visual language and his thematic – and, surprisingly, by the narrative work of Horace Pippin (1888-1946), an African American artist who suffered a permanent injury to his painting arm during the First World War, and was therefore forced to paint in an elementary, simple way. His brushstrokes were initially no more than drops in carved wood. Gradually he managed to improve.

Kenneth Aidoo visited Suriname a few years ago. There he felt the kinship with the Maroons who were transported from Ghana to Suriname. The historical circle was complete. The installation he made on the occasion of that visit, Displacement, shows that a moving medium such as video or film, his first love, is still not far away. 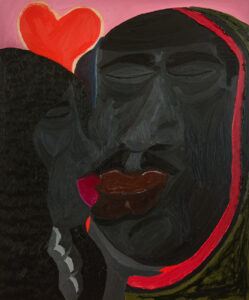 2.
In the Netherlands, more and more artists of color are receiving the attention that their work deserves. A growing number of museums have made their policies inclusive or at least more inclusive. Black curators are no longer an exception. Kenneth Aidoo and his black colleague Iriée Zamblé won this year’s prestigious Royal Prize for Free Painting. It is therefore understandable that Kenneth Aidoo uses the description Black Renaissance. In any case, it is appropriate for the visual arts. By ultimately painting a self-portrait this year, he subtly indicates that he also literally wants to be part of it.

Rob Perrée is art historian, independent writer and curator, founder and editor of Africanah.org. Lives and works in Amsterdam and New York.

← Under Projects: an empty room for testing out ideas for works and shows
Simone Leigh →