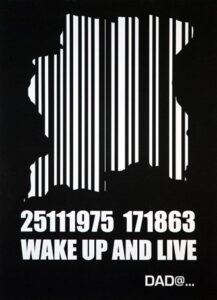 At different times in his life, he experiences inexplicable circumstances whose mysteries usually only unfold after a few years, allowing Nahar to understand more deeply and develop an understanding for complexities. He is very clear about his collection of material: “I carry that force of spirituality on me as backpack so that everything that comes on my path and yells something at me becomes my acrylic paint and my canvas.”

Miguel E. Keerveld on the work of the Surinamese artist Kurt Nahar

What no dead, no call him duppy!

With his ‘artivism’, Kurt Nahar ‘breaths’ thoughts and feelings into objects. Borrowing from Tania Bruguera, ‘artivism’ “is about creating a situation where you are an artist-citizen and a citizen-artist rather than an artist and a citizen”; because what is known about art to do activism and being part of a social movement, is what is being used (Mitchell, 2016). In this pursuit, Nahar quilts antiques and collected ‘trash’ for his practice, to narrate subject matters that builds on the ‘histories’ of items he gathers. His work is mostly known as art installations, paintings, and collages ‘forcing’ his spectators into shocking states as an effect to activate awareness, and to re-create sociopolitical and spiritual relations. He also writes poems and between 2015 and 2017, Nahar contributes to a series of columns in collaboration with journalist Stuart Rahan.
In the newspaper de Ware Tijd both held alternate weekly talks under the title ‘Nahar miti Rahan’ regarding an event in Suriname, known as The December Murders. At the time of this brutal event (in 1982), both were respectively ten and twenty years old. 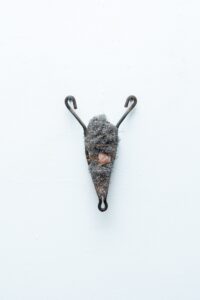 I often thought: “he might be possessed!” Kurt Nahar continuously reflected on and towards 40 years ‘celebration’ of a military coup in Suriname (February 25, 1980). In the monumental space that his work creates, I more recently started to recognize it as Afrofuturism: the practice that allows the artist to navigate through time. I believe that even before its ‘invention’ in 2016, Afrofuturism had ‘couped’ Nahar’s ‘artivism’. When I first encountered his conscious use of this power as citizens engaged in actions that directed to change policy (Mitchell, 2016), it reminded me of the process of quilting (in Suriname known as mamio). Nahar’s works often read as structured in relation to Dadaism.
However, I feel Mamaioism… which I argued is all forms of manifestation that intersects political and spiritual space in the context of Suriname. I think that every single art piece (either visual or literary) that Nahar creates contributes this school. No wonder that the current geopolitical events, especially the Russia-Ukraine virus, seemed to be significant spacetime for conversations that he aims at; to reach much deeper nuances of his old friend Dadaism, born out form World War 1. 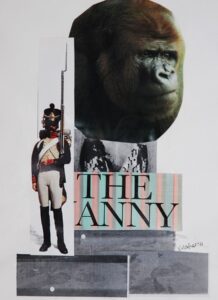 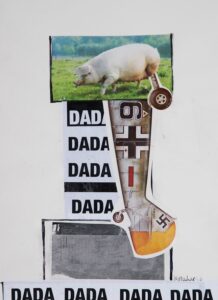 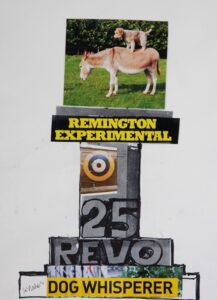 It is Sunday morning. Despite our intense collaboration and conversations physically six days a week, Kurt Nahar and I are encountering each other again. Virtually. This time I am carefully listening to what he has to say, as Nahar is describing his current project: “it feels like being in the middle of an indescribable esthetical process for peace.”
He mostly aims at shocking people. The poem Sometimes brings me to his notion: “I think if abnormal is normal and normal is far from what is” (Nahar, 2008). Like most of his works, this poem demands attention for ignored subjects to materialize through his activism. Such manifestation of bodies forces public conversation and coups people to hear, see, smell, taste, think, feel and specially to question what politically engaged art is. Sometimes, and in Nahar’s practice, it is to make brave moves and discomfort people. His mission is described as: “to caution against the ever-increasing influx of western modern influence and the thoughtless, unlimited lust amongst the population to be part of it all without considering the consequences” (Nahar, 2008). What he brings on board to the project ALAKONDRE: A Space in Time. Between April and June Nahar operates as curator-in-residence in collaboration with Readytex Art Gallery in Paramaribo, Suriname (Alakondre comes from the Winti relegion and means universal, plural truth) 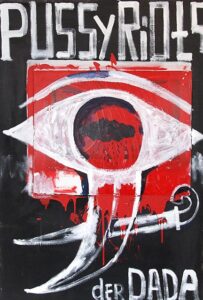 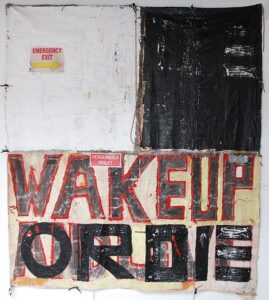 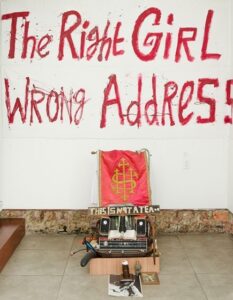 Numerology is his symbolical space to gather knowledge. He refers to December 8, 1982, arguing that he is “now understanding that everything is connected”. Nahar also feels that “probably the damage known as The December Murders had been done before”. Numbers bring Nahar patterns that exists beyond religious restrictions, and they are his starting points. The spatiality of the numerical is immense in his art practice and relates it to spiritual experiences, “since politics and spirituality stand together in our experience”. He continues: “I consider politics and spirituality as body and soul, because no leader of a people could become great in the political sphere if there were no spiritual elements involved.” 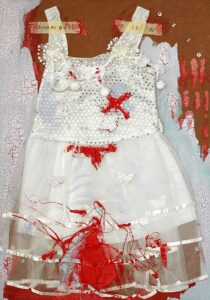 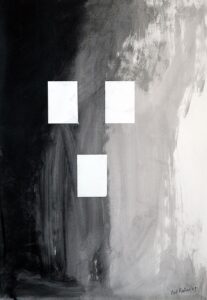 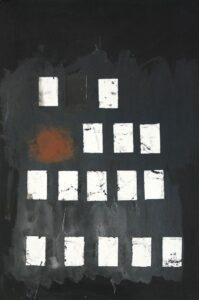 A common text in his work is ‘Pum punani Sweetttttt’. To honor the feminine, this is also a line in many of Nahar’s poems. Most recently, he embarked with his focus on ‘My Grandmother’ as framed intention in conversation with An Other. The Woman; why and how? “She is everything and the spiritual bringer of balance.” In political context, his fascination with feminism relates to what he describes as “a power to satisfy the woman”, knowing that all things and phenomena have two sides. However, for Nahar “the woman has a special kind of power and wisdom in the sense of a religious experience”. He explores feminist ‘power’ as strength within the context of biblical spirituality, where Eve is the seducer and in charge of bringing divine experience allowing herself and Adam to gain knowledge as the magical transcendence from encountering An Other. According to Nahar: “if she decides to luck paradise up, we are doomed”. This convinces me that he performs a philosophy to depict an ethic of love. Consider that he feels to be involved in an esthetical process for peace, Nahar uses sexuality as metaphor for the profound subject matter of intra-relation. This deeper form of being in relation regards connectedness between similarities and differences. A “contradiction then necessitates a higher logic: the dialectical.” And where his “poetry may begin where words end” (Keij, 2021). “What we don’t understand, the contradiction, is what we experience” as the French philosopher Emmanuel Levinas brings it. 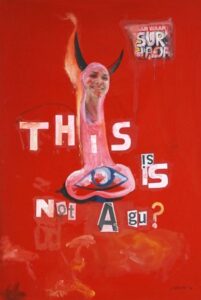 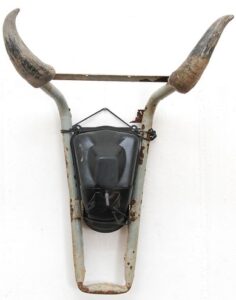 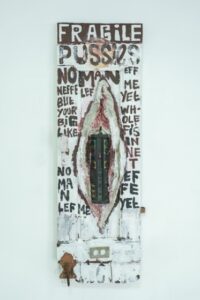 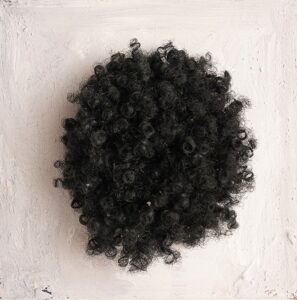 To shape his feminist performative, the street, and environments he frequents are his meeting ‘place’. In this space of encounter, he gains knowledge and insight beyond the boundaries of words to force us to listen to the voice of the goddess. A dead thing that crosses his path –a piece of wood or something else– gives information that grabs his attention, and he then hears: “you should continue with us”. Despite not performing in pursuit for wealth, Nahar is being guided by the wealth of ancestors through which exactly what he needs at that specific moment encounters him and “entities take turns in bringing me to different stations, to reach my various destinations”. At different times in his life, he experiences inexplicable circumstances whose mysteries usually only unfold after a few years, allowing Nahar to understand more deeply and develop an understanding for complexities. He is very clear about his collection of material: “I carry that force of spirituality on me as backpack so that everything that comes on my path and yells something at me becomes my acrylic paint and my canvas.” For Nahar everything flows through the blood, and antique is his great love. All he must do is listen. He thus follows the stories that lay behind places, bodies, and generations. Through preservation of object and meaning, he strives to increase awareness that “spirituality and politics go hand in hand”. 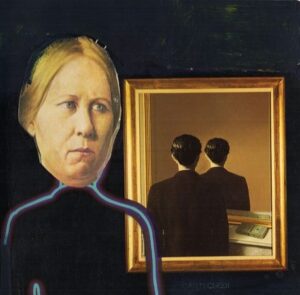 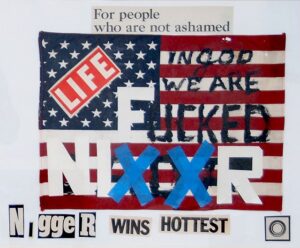 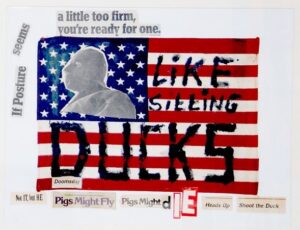 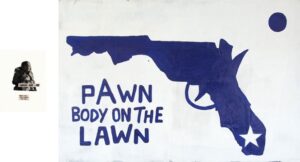 Why does Nahar’s activism centers around Afro-religion? Maybe because of the voices of the dead [laugh]. But “gaining insight into real life” for him ‘walks’ through Afro-spirituality. Maybe because of his involvement as a necessary voice for the dead, with his creative space instructing him “to force the living to listen to what happened to their ancestors and to honor them for the knowledge that came from them”, because “who does not listen to the past is a lost soul”.
He believes: postcolonialism and colonialism always travel hand in hand. “Systems have been designed in ways that allow us to still live the legacies of school, language, conditioning, unconsciousness, money, destiny, passivity, fake worshiping among other; to abstain from alakondre.” But maybe… “Maybe alakondre is not the correct word? At least pursuing its translation into ‘all nations’ doesn’t work at all.” In fact, no matter its meaning, “we are not there yet” he argues; “to the idea of diversity”. In finding ties with him, my guess is that alakondre is not ‘unity’ and neither ‘oneness’; rather alakondre should be connectedness because within the equality there are differences. Therefore, “diversity is always relative diversity within that ‘unity’ […] it is the overcoming of the bipolarity itself” (Keij, 2021), for which I dare to say that ‘unity in diversity’ is sheer nonsense. For maybe alakondre is: preferring to believe in ‘solidarity in diversity’. 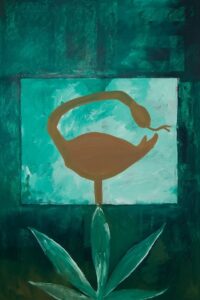 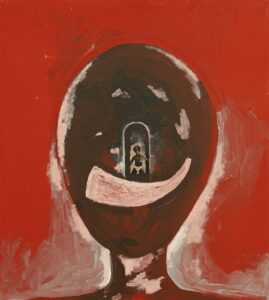 Beautiful things arise. “Talking to each other and taking time to listen to each other is the magic we need today”, says Nahar. He still learns that alakondre lurks in all of us and at least it gives him the space to listen to who and what comes his way… For “this invisible hand guides the process of my awareness and to be able to live in a broader cultural, social, political, and spiritual context”. When I ask Nahar if his performance of ‘artivism’ as reverse spell of Un-Doing anything at all and what then, he mysteriously smiles and quotes a Jamaican grandmother: “What no dead, no call him duppy!” 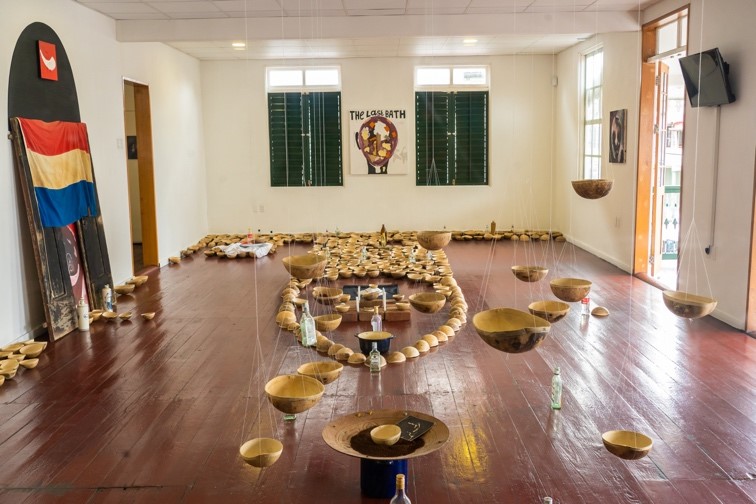 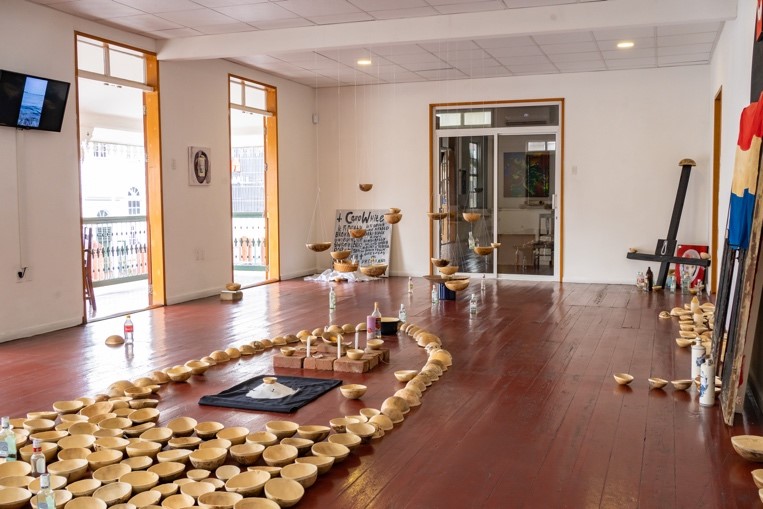 Miguel E. Keerveld, Curator-in-Residence for the project ALAKONDRE: A Space in Time in collaboration with Readytex Art Gallery (RAG).

← Personhood in the paintings of contemporary Nigerian artists.
Speak, Mnemosyne: a groupshow of young female artists →