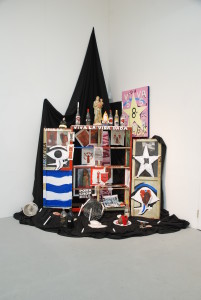 In a country like Suriname with a population of half a million people everybody knows each other. Because of the political nature of his work, Kurt feels inhibited. This self-consciousness is something he is letting go of, more and more. He used to think all the time about what his parents would say or think. “I think less and less each day about other people’s opinions about my work. I try not to think about my close environment. In a way the word ‘DADA’ is a sacred word and it enables me to feel unlimited freedom and space in which I can create.”

Kurt Nahar in an interview with Marieke Visser.

Kurt Nahar: “The best environment for an artist: a room of one’s own”

Visual artist Kurt Nahar (Paramaribo, 1972) works at home. His studio is overflowing with images, art work in several stages of construction, magazines, random stuff, experiments in different shapes and phases, posters, furniture, buckets, newspaper clippings and more. This is also the setting for the interview I did with this Surinamese artist who is known for his provocative art work which is mostly about a recent black page in Surinamese history, known as the December Murders. On December 8, 1982, fifteen young men were killed in Fort Zeelandia by the military then in power, under the command of Desi Bouterse who is currently the president of Suriname. 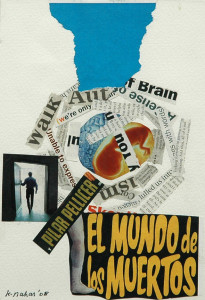 Our conversation starts with the question whether or not an artist should be socially conscious and committed to change the world through his art work. Should art be a means to raise awareness and to get a message across? And while most people I have interviewed have many thoughts on that subject and weigh their answer like gold dust, Kurt is very clear: “Yes! Of course! It is like a calling.” No hesitation at all.
In his own country, Suriname, on the northeastern coast of the South American continent but still part of the Caribbean, he feels like he’s on his own. “It is a pity that other artists don’t dig deeper. As a colleague I don’t feel thrilled anymore by the work of my contemporaries. They stay at the surface. I feel that as an artist you have the obligation to be committed. Artists have a special power to come very close to the public, to reach society. I don’t feel that my colleagues are aware of that power. People tend to keep working according to a successful formula that sells; there is no more growth or development. Most artists are just interested in making money. That is not my focus, but I do understand if other people make different choices. For me, the path I’ve chosen didn’t bring me material wealth. Being a committed artist with a cause has been a sacrifice. Not only for me, but also for my wife and my family.”
“When you work as an artist you will find through the years that there are more interesting layers to uncover. You can add much more strength to your work. Someone like Banksy, making street art in Gaza, no one knows who he is, but everybody knows his art nowadays. He started just like us, a young boy in a room, aspiring to make art. He is not thinking about his personal fame, he is not thinking about making money. He is using his talent and look how powerful his work is! A group I admire greatly is Pussy Riot. The way they handle difficult subjects, with Putin in power, in Russia in this day and age … That is just great.”
“In the region I look at people like Yubi Kirindongo and Ruben La Cruz. (Both artists have recently visited Suriname, MV). They both have been through a lot during their life but they kept their strength. I respect that. The layered-ness of Kirindongo’s work appeals to me.” 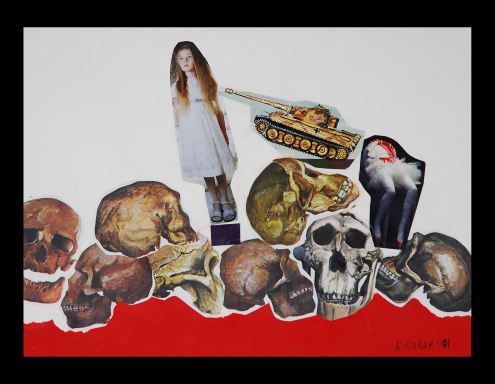 It took Kurt Nahar some time to become aware of the power of art himself. One moment he really felt how his work impacted the audience he still remembers vividly. Maybe ten or more years ago he participated in the National Art Fair, an annual art event that is increasingly criticized for its lack of setting standards and not raising the bar. He had made an installation, something like a counter with crosses and a cage, and the names of those who were killed on December 8, 1982. “I saw a lady looking at my work, really studying it. She stood still, didn’t speak, but I saw how emotional she became. At that moment I realized how much power a work of art can have. Many people have let me know what my work means to them. Nowadays on Facebook I get a lot of reactions. Most of the time this is positive, but sometimes there is a darker side. People have made very personal threats. I don’t let it get to me too much, I feel like I have an invisible shield. But the negative reactions are real. And it has made me more careful.” 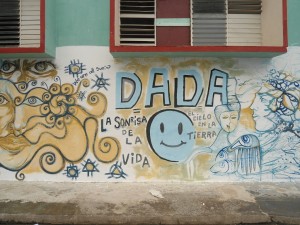 Kurt finished his education at the Nola Hatterman Art Academy (NHAA) in 1997. He still works at NHAA as an art teacher today. In 2000 he went to the Edna Manley College for the Visual and Performing Arts in Jamaica. There he gained many insights about art. It was in Jamaica he first heard of Dadaism, which now plays such an important role in his work. Also he got acquainted with the collage technique which he frequently uses. “I never had an art history lesson in my life, but as soon as I heard about Dadaism I knew that these artists knew about the power of art, about how art can bring change. Duchamps with his readymades … It really struck a chord with me. And that never changed.”
Dadaism also struck a chord because of the poetry and word play of this art movement. Kurt Nahar is best known for his art work but also because of his unique poetry in which he reacts to the latest political developments, currently always published with the tagline ‘WAKE UP AND LIVE@DADA’. To him it makes no difference: images or words, it stems from the same drive to make people aware, to make people think, to start a discussion. “I started writing as a young boy. Nobody ever understood what I wrote. I thought that I just had written the best poem on earth, and then people made fun of it. After getting to know Dadaism that changed. It empowered me. I don’t think about what I write. It gets kind of deposited in my head somehow and then I have to write it down and share it.” 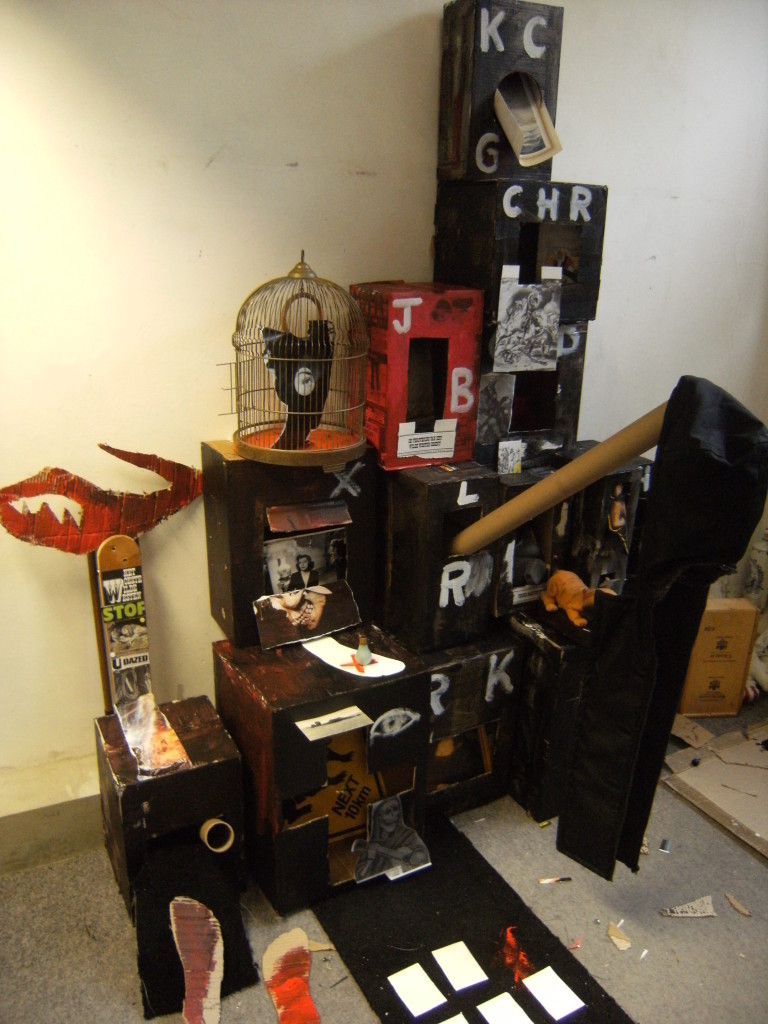 During his stay at the Rijksacademie in Amsterdam, in 2009, he was able to do a lot of research and obtain documentation from the period of the December Murders. Why is he so dedicated to this subject? “I see the rift widen, between those who know what happened and those who don’t. I know that there are many stories of which many have not been told. If people want to vote, they should have access to all information there is, to be able to make a good choice. The stories I heard, the memorials I witnessed, the photos I saw: that keeps my fire burning. We don’t have a tangible spot where we can have a memorial. We literally (and figuratively) have no place in our country for that part of our history.” During the years in Jamaica he learned that as an artist, you have to be able to defend your work and what you are doing. And Kurt is certainly standing tall for his work. 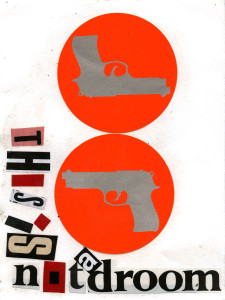 A driving force for Kurt Nahar is the Readytex Art Gallery, and especially Monique NouhChaia SookdewSingh, the owner of the gallery. “Monique is a courageous woman who travels a personal path with each of her core artists. She is not afraid to have discussions with her artists, and that has made me grow. She also had the insight to enable the people from the digital art platform Sranan Art Xposed like you to do their work, and that adds to a more critical look at our work too. I feel it is really up to the artists now. Monique and other people who write and think about art have done so much already. We have a lot to offer as Surinamese artists but if we keep on painting charming wooden houses …”
Working at home, in his somewhat overflowing studio, feels good. Sometimes he misses a place where he can completely concentrate, like he had at the Rijksacademie in Amsterdam (2009), or Duende(2008) in Rotterdam. “That is the best environment for an artist: a room of one’s own, where you can stay and work without being distracted.” Another thing he liked about working in another country is that he felt freer. In a country like Suriname with a population of half a million people everybody knows each other. Because of the political nature of his work, Kurt feels inhibited. This self-consciousness is something he is letting go of, more and more. He used to think all the time about what his parents would say or think. “I think less and less each day about other people’s opinions about my work. I try not to think about my close environment. In a way the word ‘DADA’ is a sacred word and it enables me to feel unlimited freedom and space in which I can create.” 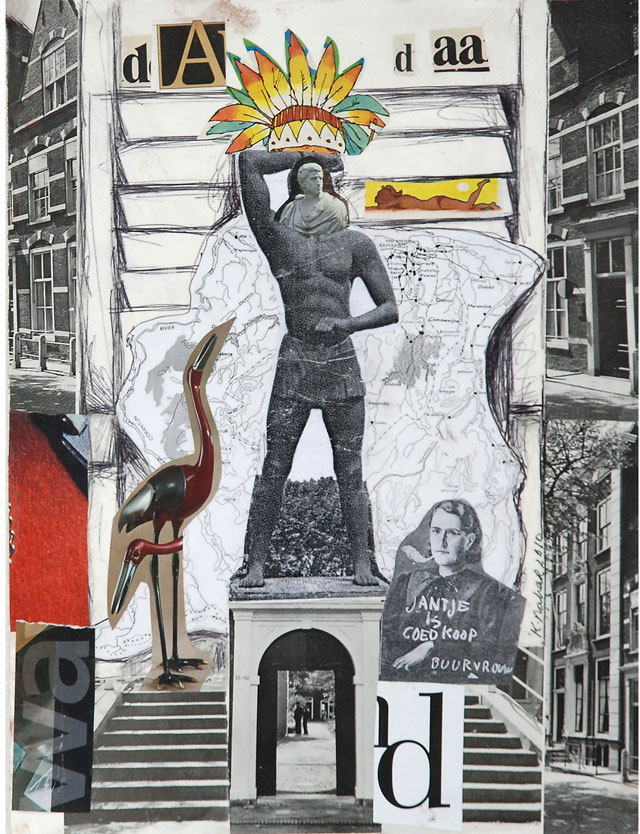 Marieke Visser (Bennekom, the Netherlands, 1962) studied journalism and language and literature in the Netherlands. As a publicist she writes a lot about art, culture and history from her own news agency Swamp Fish Press. She is currently editor in chief of Sranan Art Xposed.

Some of his poems

for Bouta and his followers