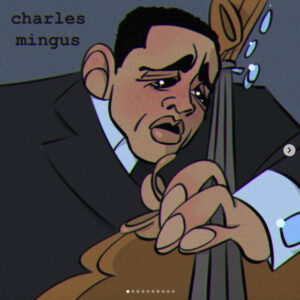 From my own personal experience, growing up, I did feel different and often out of place as a working class artistic mixed-race boy who wasn’t into football for example. Back then, I guess I wasn’t seen as traditionally masculine but I also didn’t want to ever show vulnerability in front of others either.

Malachi James, an animator from London recently hosted Black Masculinity & Vulnerability. This event invited audiences to think about the portrayal of black men and masculinity in media. His animated short Silent Night was the focus on which James led the evening.
Silent Night is based on the recent past – a Christmas lockdown to be exact. Its protagonist a black family man is laid off from work. With the Holiday season looming, he walks the street stressed and defeated, wondering how he will gift his family and daughter this year. The animation is a tender look at an all-too-common problem of providing over Christmas. Something many families will resonate with over the last two years. The short is also a commentary on the social system and capitalism, without being too obvious. It is overlaid by an instrumental of the classic song Silent Night which adds both happy familiarity and sorrow to the story. 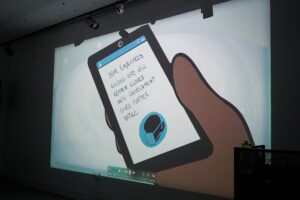 A still from Silent Night

The film’s father is portrayed sympathetically. His vulnerability here as a black man is juxtaposed against an image of a white family; the advert featured inside a toy shop. James invites the viewer to ponder for themselves if his situation would be different somehow if only, he was more like that family.
In the film’s final scenes, the father finds an unlikely solution to his problem. It is a heartwarming moment and a reminder that not everything is solved by throwing money around. In fact, the compassion he shows not only solves his dilemma but depicts this black protagonist in an altruistic light.
The inception of Silent Night came from a very personal place for James, at a time when many people could relate to the problems the pandemic and the legacy it left behind. 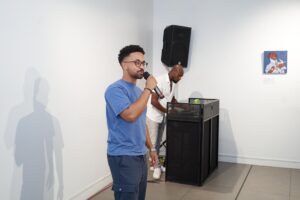 What was your inspiration for Black Masculinity & Vulnerability? Do you have a personal connection to this?

An array of experiences over the past couple of years. In early 2021, my Mum died so suddenly by taking her own life after a life-long battle with her mental health and that left me feeling extremely vulnerable. I struggled to cope for a while but I was eventually able to find the right therapist to help me through the grieving process and help me understand myself better. I wasn’t comfortable being vulnerable in front of people before but over time, with the help of my therapist, I was able to be a lot more open about my experiences and emotional pain.
Later on in the year I was chosen to feature in the Netflix documentary, Love Languages, where 6 black men in a barber shop of different backgrounds and generations spoke openly to one another about love and loss. After reconnecting to the music that I loved as a teenager, Jazz from mid-century America, I found that there was a story I wanted to tell through caricaturing 10 Jazz musicians. We’re used to seeing black male icons like them as cool and fashionable, but I was interested in humanizing them and showing their sensitivity and vulnerability as it was so often expressed in their music. Thus, I wanted to convey that as black men our vulnerability should be considered a vital part of our masculinity. 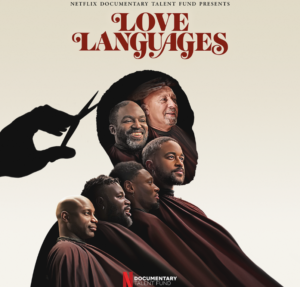 Who are the artists and animators you admire?

There are many artists I admire but Francis Bacon first came to mind for his brutal, raw, horrific yet beautiful depiction of the human condition. I often refer to ancient tribal artwork of Africa for similar reasons and for the sheer fact that those unknown ancient artists were masters of exaggeration, which really appeals to me as a cartoonist. I also hold Bob Camp and Gerald Scarfe in high regard as among the greatest cartoonists. In terms of animators, Chris Sauve, Floyd Norman, Andreas Deja, Bob Jaques and any Canadian animator working in the 1990s and 2000s. I believe Canadian animation is superior. 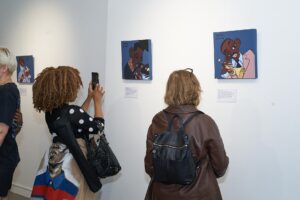 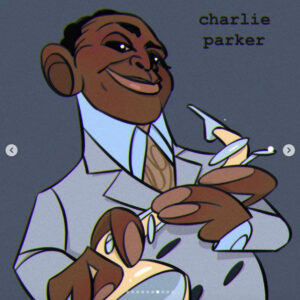 Where can audiences watch your animation?

If anyone wants to watch the animation I screened at the Exhibition they can go to my Vimeo page where it lives at https://vimeo.com/520600316

How was the event received? What were the important discussions that came from this?

I was very happy with how well received it was and the gallery was packed. People seemed to have really engaged with the caricatures and the animation I made. One topic I heard being brought up frequently was the question of what it means to be masculine as a black man. For me, moving forward in the 21st century, it means not being afraid to be open and transparent about how I’m feeling and my experiences. To achieve what I want, to nurture the community and love people.

What do you want your viewers, particularly black men, to go away thinking or feeling?

Not only is it OK to be vulnerable but there is in fact power in vulnerability. We all experience the same feelings but unfortunately a lot of us bottle up anything resembling vulnerability. And to our detriment, sometimes we never get to experience the relief of being a fully open honest human being. I’m not saying you have to share absolutely everything all the time but if something’s bothering you or you’ve been hurt or you need help it’s OK to reach out and talk to someone. And it’s definitely not a sign of weakness if you need help or need to talk about personal issues that goes for everyone. I’m not perfect and I still forget to remind myself of this from time to time but I’ve made a lot of progress over the past year and I’ve seen some of the benefits of being open about my vulnerable side.

How do you feel black women relate to this topic?

I can’t speak for every black woman but I think it’s safe to say that black women generally are more in touch with their feelings. But this topic definitely affects them because their fathers, brothers, uncles, sons, friends and their partners have most likely struggled with discussing sensitive feelings and mental health in front of others at some point. I’m sure a lot of them would like their loved ones to be more open about their feelings. 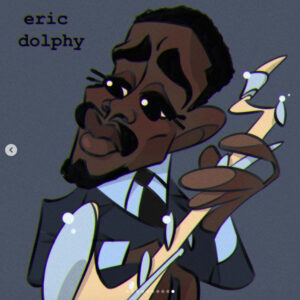 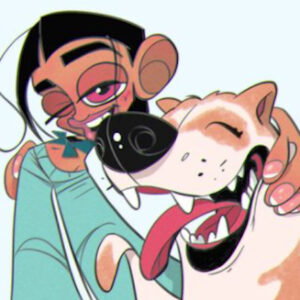 Do you believe there is a stigma within the black community around masculine vulnerability? If so, where do you think this derives from?

With cultural and societal expectations, looking a certain way and more importantly acting a certain way is definitely something that runs deep historically. But there have been many historical black figures who have redefined black masculinity for themselves. It’s not only a Western problem but perhaps having to keep your head down and not “talking back” during times of slavery generation after generation is probably on contributor. But it’s a very complicated question I don’t feel qualified to answer, historically speaking.
From my own personal experience, growing up, I did feel different and often out of place as a working class artistic mixed-race boy who wasn’t into football for example. Back then, I guess I wasn’t seen as traditionally masculine but I also didn’t want to ever show vulnerability in front of others either.

Can you talk us through the creative process whilst developing your animation?

During lockdowns in 2020, I knew the restrictions that came from COVID-19 were hard on a lot of people. Whether they were furloughed or laid off, people struggled financially and I know what it feels like to grow up poor. Nearing the Christmas season of 2020, I wanted to make an animated short set around that time. I also felt that I’d never seen animation representing working class black Britain in family entertainment so I wanted to tell a story about characters from the same background as me.
Even though the film is set in London, I took a lot of visual inspiration from American animation and I always loved the story in the Simpsons pilot, Simpsons Roasting on an Open Fire, for its heartwarming message about valuing family over materialism. So, I set to work on it with the help of the talented animator, Katy Fabian and we made something that has really resonated with people.

What are you working on next?

Aside from my regular storyboarding job on pre-school shows, I’m currently working on an NFT collection and then I’ll be moving on developing an idea for a kid’s animated series which I can’t talk much about right now. However, I will say that I am keen for the show to center around Black British characters of working-class origin.

What are your thoughts on diverse representation in Film & TV?

I want the main characters in my show to feel authentically Black British, while at the same time being very relatable to everyone globally. I feel that I see slightly more in the US but in the UK, I definitely don’t see enough black representation in animation. I think that mainly has to do with the fact that animation in general is a white middle class dominated industry. However, my aim is to inspire more children from my background to pursue a career in animation when they grow up, as I never saw any role models like me in this field when I was young.

Christabel JOhanson is an art critic from London

← The Harlem Renaissance at 100: as black as it was gay
Mawande Ka Zenzile →