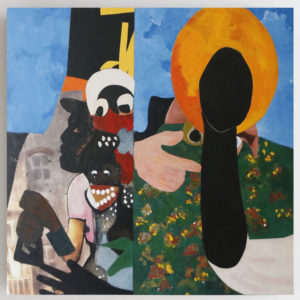 Striking in both colour and composition, Haitian-American artist Milo Matthieu’s works are collages built with layers of paint and paper. Originally having studied photography, his experimentations with pre-existing images as source-material open up new realms of possibility for the artist; aside from a process that permits his works to grow organically, the use of readymade imagery allows him to pay homage to artists who have come before. The resulting works are hybridized, almost Frankensteinian, often textural and three-dimensional, especially when viewed from oblique angles. 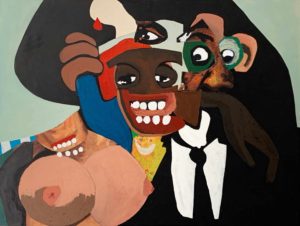 These are works that seem to come alive as the viewer moves around them, bringing to the fore a sense of vitality and energy referencing a manic expressionism and sense of materiality. Each piece is dense with texture the inclusions of textiles and collage, perhaps suggesting the formation of identity as ‘a sum of parts’. Each artist is also inherently influenced by the city that surrounds them, creating organic compositions that – not unlike Picasso and Bracques style of Cubism, that constantly evolves over time, reshaping with each movement and each visitor before them. 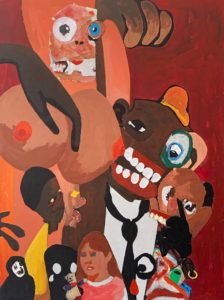 Furthermore, for Matthieu, race becomes a dominant issue and relevant factor within the work, where words like ‘COLORED’ are scribbled across the canvas. Inspired by music, from doo-wop to contemporary rap, the artist’s sense of musical-awareness and movement flows through the works with a kind of urban sysnesthesia. On one hand, a reference like Kandinsky does not seem entirely displaced, but the work houses such a contemporary, young, even ‘cool’ appearance that they seem to cull from different eras of history, culture, and identity – which is probably not totally unlike Matthieu as a young black man living and working from Brooklyn, creating work for a society consumed by rapid-succession imagery, a culture of ‘Instagrammable’ material, and a proliferation of inspirations, resources, and influences.(text Beers London)