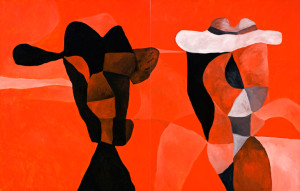 “Collectively while the show’s topography appears as malleable as the super continent it originally references. Through the looking glass ‘Pangaea: New Art from Africa and Latin American’ is less about continents and more handpicked countries, with works by artists that are visually inventive. Offering alternative narratives to the ideologies and interests we already have carved into our psyche.”

Rajesh Punj about ‘Pangaea’ in the Saatchi Gallery in London.

In the beginning the individual continents were moulded entirely as one landmass, or a super continent as is good geological terminology. A mere three hundred million years ago in the making, what was then Pangaea dissolved one hundred million later into the fragmented continents we are more familiar with on a coloured map today. And the forming and subsequent breaking up of the entire earth way back when becomes the impressive bravado from behind which these contemporary artworks are temporarily drawn together at Saatchi Gallery. As though works from Latin American and Africa appear to have be cradled by the origins of everything. Such a burden is more perplexing than it is engaging, as it becomes the benchmark for introducing art from new geographies. As though these works have been ‘artographically’, and not ethnographically discovered for an ever widening art historical canon. Suggesting the epic, Charles Saatchi is positively recognised for playing fast and loose with geography. Previously shoe-horning Pakistani artist and academic Rashid Rana into a show entitled The Empire Strikes Back, Indian Art Today. Whilst also including artists who were more American than they were willing to be identified with India.

Here again artists like London based, Colombian born Oscar Murillo and Spanish artist José Lerma appear to make up the numbers for a sweeping show of one and two artists from countries that are laxly tied together and delivered as two continents worth of work. With that in mind it requires of us the ability to pick and choose interesting work and disband with the notion that this show is a true reflection of what is happening in those collected countries and continents. And where it becomes interesting is in the even more loosely determined curatorial layout of works, which creates a wonderful opportunity for art to breathe, and exist in space without the intruding torment of another work, or the tension of a more rigorous curatorial formula. 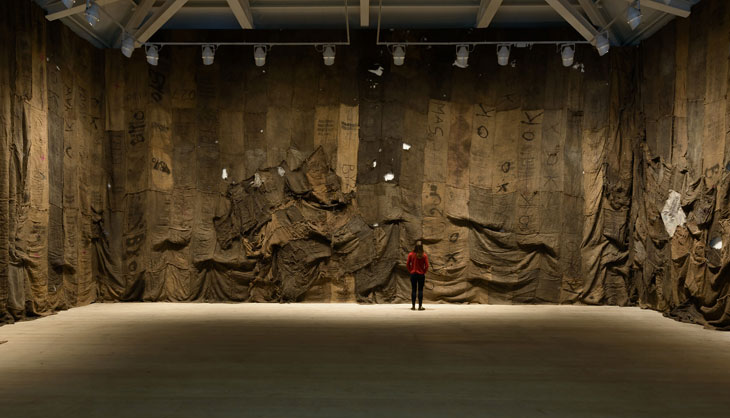 Works of merit, when navigating these intersections of space, include Ghanaian Ibrahim Mahama’s installation of discarded cocoa bean sacks. That are torn open and threaded together as a monumental stretch of darkened fabric that effectively covers the white walls of the gallery like a dark disease that has perfectly enveloped the central space entirely. Walking into this work is no less than walking on a stage and into a theatrical set, where morality and the majesty of light have all but disappeared; for the corrupt parables of consumerism, and the manipulation of certain societies for the benefit of other more lucrative ones.

Besides drawing a vast patchwork of sacks together as a curtain, Mahama introduces his own take on consumer politics by layering on Chinese – African trading logos that render these materials of two different continents compatible. And a reflection of the interchangeable relationship between consumer and producer. Between those creating exportable products that can be shipped out, and those who can afford to consume such perishables in equal measure. Then there are Leonce Raphael Agbodjélou’s haunting portraits of semi naked women with their dark breasts exposed. These works are born of a politics of change in West Africa at the time, with the fruition of independence across the continent in the 1950’s and 1960’s; when societal interests included culture, clothing and music. 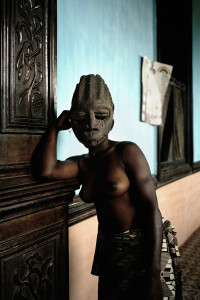 Part of the Demoiselles de Porto-Novo series, photographed in 2012, at his mansion dating back to the early 19th century; Agbodjélou’s figures are shown standing in relative ease in his architectonic triptych prints. Yet while the interiors appear utterly absorbing for their period features; troublingly his subject’s faces are covered over by distinctive tribal masks. With their breasts intentionally exposed, and their faces covered over, Agbodjélou appears to intentionally return them to an age and era when the African was more an exotic curiosity than part of an expanding global society. And his portraits clearly reference such idiosyncrasies, whilst also playing with a prevailing notion of beauty. Such politics also has the Benin based photographer critiquing a celebrated period of modern art; when the likes of Pablo Picasso and Henri Matisse were drawn to the reductive sophistication of African art, as an influencing spur for the development of the School of Paris at the turn of the century. Such complex points of entry into these photographs, when it becomes impossible not to see something of Picasso’s 1907 work Demoiselles d’Avignon, has the artist subverting our understanding of modern narrative. Compelling for their impressive scale, and the manner in which he locates his subjects in deliberate settings that induce grand narratives; Agbodjélou’s portraits take aim at our prescribed notion of a figure seated in space. 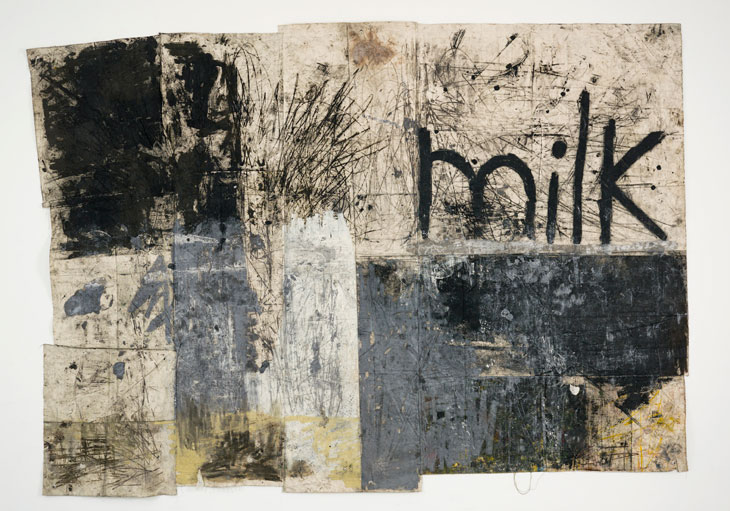 Possibly of most interest is the work of London based Columbian born Oscar Murillo, whose canvases and sculptural configurations are based entirely on the tatty detritus that litters his studio underfoot. That appear rescued from the bins and turned over to the gallery, from where they successfully generate their own deprived narratives. Murillo’s art, and the refuse that constitutes his works, are born of his interest in allowing his ideas to physically establish themselves to a greater or lesser degree, without the mitigating narrative of techniques and visual appropriateness. For all manner of destructive and damaging actions to fertilise into something that might resemble a visual gesture. And it becomes the job of the audience to infiltrate whether Murillo’s works are genuinely based on a more naïve sense of appropriateness, or are more and more contrived.

Works like Untitled 2011, of oil stick, graphite and dirt on untreated canvas; is a candid demonstration of the artist surrendering himself entirely to the unconscious antics of chance. As his coloured scribbling’s record a period of impetuous mark making that reads like the tyre marks of a cyclists riding over an oil spill in panicked ecstasy. That the continuous thread of colour stays within the frame of the ruined canvas, appears the only controlling influence that the artists wants to introduce to the work.

Another Dark Americano 2012, recalls something of the original energy of the American abstract expressionists of the 1950’s, who let rip with their interest in the materials themselves; coupled with a Duchampian notion for allowing chance to govern circumstance. In Dark Americano Murillo appears to fashion something out of a whole series of individual pieces of canvases that have been damaged and defaced to varying degrees. And almost as an unrehearsed reference to reality, Murillo renders the word ‘milk’ across the top right hand corner of the work. Possibly as a pointer to a fundamental need in us all for some kind of sustenance. And as basic as the gestural marks and tonal mark making that changes these tatty pieces of canvases into more of a dishevelled idea. 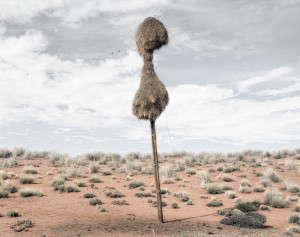 Then there are South African photographer Dillon Marsh’s c-prints of what appear to be ugly and unimaginable growths on telegraph poles that are situated in vast uninhabited landscapes of dirt and sand. These unsettling manifestations rooted to isolated telecommunications poles, appear to have enveloped the telegraph poles entirely, as though parasites multiplying from the electricity running through the wires above. Marsh appears interested in the notion of the natural phenomena, as his series of large scale photographs from 2010, were taken in the Kalahari Desert where the weaver birds congregate and construct these impenetrable nests. Which hang from these telegraph poles like calluses. And in dead of night it may be that they take on a more terrifying persona entirely. Within the carpeted skin of these delicate constructs are elaborate nesting colonies that can house up to a hundred pairs of birds at any one time, with several generations confided to the internal chambers of these biomorphic shapes. What may appear permanent though is as temporary as the seasoned skies above; exacerbated by the fact that these elevated haystacks are likely to cause short circuits in the rainy season and catch fire in the dry season. 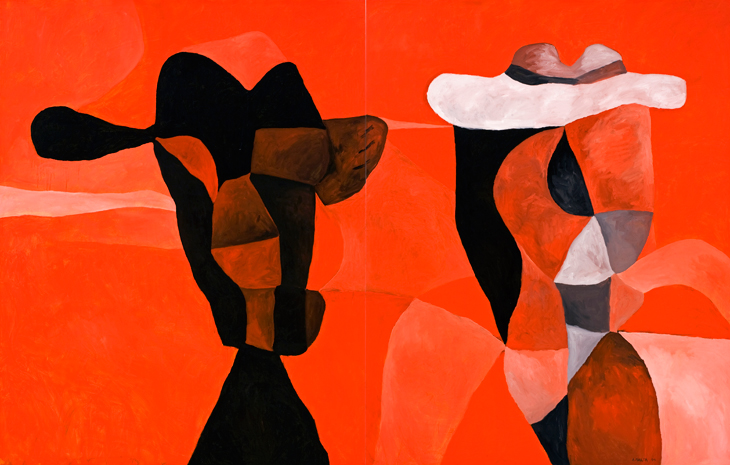 Further Brazilian artist Antonio Malta Campos’ sizable paintings of acrylic on canvas read like muddled attempts at appropriation. Concentrating on the visual Campos’ canvases appear no more than bastardised versions of leading works from the modern period. Deliberately referencing modern painterly techniques, Campos fills vast flat spaces with coloured sections, and overlapping biomorphic shapes that resemble something of the original interests of the European Cubists and Fauvists, in both the figurative and abstract.

Campos’ portraits are constructed entirely of a series of loosely associated shapes that are coloured in; in an attempt to create a landscape of two figures in space, but is as likely close-up to be a series of colours that have come together on a canvas like a tapestry of idiosyncratic forms. Inspite of such loose associations, works like Figures in Red 2004, still prove engaging, for the artist’s palette and the technique that gives his audiences subtle nuances of previous painterly styles. But it is difficult to know where he is going with this, and why we should take an interest? And possibly even more of an achilles’ heel, for works that are otherwise visually strong; is their scale, as the size of these works almost appears to rid them of any detail. The beauty of what occurs might well have been better served in a series of much smaller works that recalled more successfully the original inventiveness of modern art in salon styled framed. Campos might well have taken on the persona of a modernist painter, by introduced a possible alternative to its outcome one hundred years later. 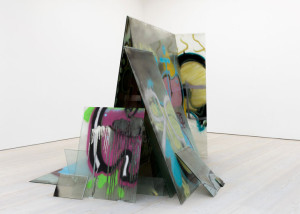 Peruvian Jose Carlos Martinat’s work comprises of sheets of glass, of varying sizes and coloured spray paint; that for the Pangaea exhibition are lined up to stand like a stack of cards, precariously leaning against one another for support. One sculpture in one room, Martinat’s work recalls something of the visual anarchy of the two cities he calls home, Lima and Mexico City. Relocate the interventionist graffiti of a whole generation of young disillusioned and very agitated men, who temporarily claim pocket holes of territory for unsolicited adventures in reality. The beautiful and brutal take hold of these glass panels as signatures to the underbelly of gang culture. Defaced sufficiently Martinat then reclaims them from abandoned buildings in rundown parts of the city, in order he can relocate them in the neutrality of gallery spaces as something else entirely. These are the marks of unidentified gangs who are in as much a state of flux as the continents appear to be.

Collectively while the show’s topography appears as malleable as the super continent it originally references. Through the looking glass ‘Pangaea: New Art from Africa and Latin American’ is less about continents and more handpicked countries, with works by artists that are visually inventive. Offering alternative narratives to the ideologies and interests we already have carved into our psyche.

← Dak’Art OFF
Up Hill Down Hall. Marlon Griffith & Hew Locke →