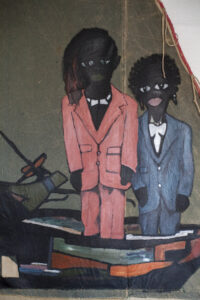 There is something delicate and unsettling about memorializing disasters like cyclones, landslides, hurricanes, etc., particularly when lives are lost. In a recent solo exhibition titled Homage to the Sailor, featured at the Afriart Gallery booth in the gallery HUB section of the 15th edition of FNB Art Joburg, Mozambican artist Nelsa Guambe presented figurative paintings on sails she rescued from the traumascape of Chicuque Village, her home area in the heart of Inhambane, as a way of paying homage to the sailors whose wares were ravaged by Cyclone Dineo.

Located along the Indian Ocean in a zone menaced by ecological disasters, Mozambique is frequently battered by flooding and storms. One of the recent ones was Cyclone Dineo which hit parts of the country on the 15th of February in 2017. With high winds of 180 km/h and torrential rains exceeding 150 mm in 24 hours, according to Mozambique’s National Institute for Meteorology (INAM), the dangerous storm left an unbearable trail of destruction. Over 10 people were killed, at least 55 injured, and 650 000 were affected, among them the displaced. The impact of the storm was greatest in the two tourist destinations of Inhambane and Vilanculos.

There is something delicate and unsettling about memorializing disasters like cyclones, landslides, hurricanes, etc., particularly when lives are lost. In a recent solo exhibition titled Homage to the Sailor, featured at the Afriart Gallery booth in the gallery HUB section of the 15th edition of FNB Art Joburg, Mozambican artist Nelsa Guambe presented figurative paintings on sails she rescued from the traumascape of Chicuque Village, her home area in the heart of Inhambane, as a way of paying homage to the sailors whose wares were ravaged by Cyclone Dineo. Regarding her positionality in relation to the affected sailors, Guambe states, “I come from a small coastal village. They are my people and my community.” Of casualties, “Fortunately, I do not know of any sailor who died in my village but there was a lot of human and physical damage in the province as a whole.” 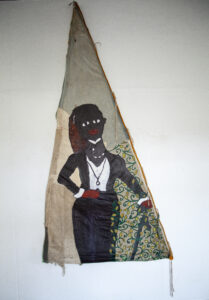 I am persuaded to read the sails – serving as Guambe’s non-conventional canvases – through art historian and curator Ralph Rugoff’s concept of the forensic aesthetic, for these rescued materials are archives that bore witness to the Cyclone. That they carry scars of the disaster also coaxes me to consider them through Jacques Derrida’s notion of the trace. Although the artist has taken them out of situ, added a layer of paintings on them, they still carry marks of something not-here and not-now. Either way, the artist reveals their source because she really wants us to contemplate what lies underneath the works of figuration. She is drawing us to the memory of the disaster by reminding us to scrutinize the materials carrying the paintings.

Upon seeing Guambe’s figures, painted in deep, unequivocal black pigment redolent of Kerry James Marshall’s style, I got worried that the artist is running the risk of erasing the narrative of the sailors, imposing hers through the depictions she creates. But the artist is sure of her objective. “The intention is not to erase the sailors’ histories. The scars and the old-age marks of the sails are visible. You can see the sails have had a life of their own. My intervention is a continuation of the story of the sailors of my village. Stories which were somehow erased by the Cyclone”, states Guambe.
Left in the open and exposed to the weather elements without Guambe’s intercession, the sails could have just decayed and with them the sailors’ tales. The act of rescuing the material is a radical strategy of saving and conserving them. The one appropriated from Bambo’s wife was meant to die with the owner’s story too. Although the artist extracted the sails from their makeshift location, hers is an invitation to us to see them in a new light, taking a new form. In doing so, she is also giving the materials a second life. 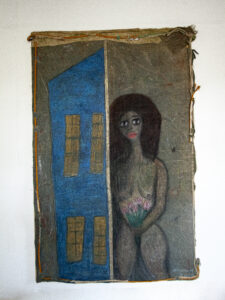 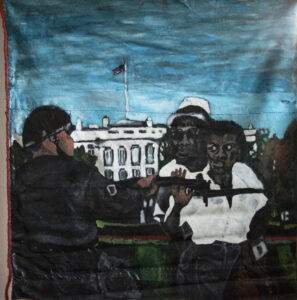 In a place prone to natural disasters like Mozambique, the catastrophes happen often. The survivors mourn and rebuild. However, healing and care are needed to help them move on. The process takes time. As such, memorializing such experiences is an exercise that requires a great deal of empathy, something that Susan Sontag cautions us on in her 2003 seminal text ‘Regarding the pain of others’. In the 2019 Venice Biennale, Christoph Büchel’s Barca Nostra (Our Boat) received a lot of backlashes from art lovers who felt his mediation was not the ideal way to raise awareness of the deaths of close to a million migrants who died attempting to cross the Mediterranean into Europe. In the context of the Biennale, the artist was seen as exploiting human suffering for entertainment.

Likewise, in July 2020 the National Gallery of Zimbabwe commemorated the devastating Cyclone Idai with the Aftershock exhibition of photographs of traumatized survivors from the Chimanimani and Chipinge districts of Zimbabwe just a year after. The images on display were disturbing. Some of the people shown in the photographs were yet to receive help. They were living in makeshift tents and the country’s government had not replaced their birth certificates and identity cards. They looked traumatized. Worse, they were not aware that they were on display on the walls of a gallery in the country’s capital city. They were not even invited to the opening of the show. The exhibition took place relatively soon post-disaster when wounds were still fresh. As though the horrible images and video footage which had appeared in the media had not reached the world, the curatorial statement of the exhibition indicated that the show aimed to enlighten people of the magnitude and socio-economic impact of the cyclone on the affected communities.

I deliberately juxtapose the two examples above with Guambe’s show to drive home the point that timing has decisive significance when dealing with devastation in the post-disaster phase. The artist has to be commended for carefully considering this aspect and paying homage to the sailors half a decade after Cyclone Dineo hit Inhambane. 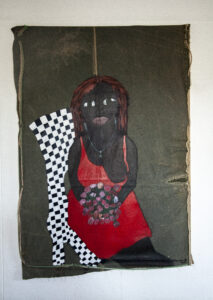 All images courtesy of the artist and Afriart Gallery

Barnabas Ticha Muvhuti is a Ph.D. candidate in Art History in the NRF SARChI Chair program in Geopolitics and the Arts of Africa, Rhodes University. His Ph.D. research is partly funded by the Rhodes University African Studies Centre through its funding from the DFG, the German Research Foundation under Germany ́s Excellence Strategy, funding number EXC2052/1