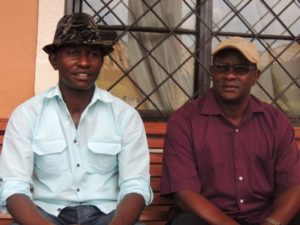 Our study focuses on revival of Orchestre Impala, a popular band from the Habyarimana era of the 1970s-80s. We hope this musical revival signals a politics of cultural healing in Rwanda, and coming to terms with the cultural past. This example shows how popular music can contribute to peace-building in post-genocide Rwanda, and perhaps elsewhere.

Rafiki Ubaldo and Helen Hintjens on peace-building through music

Musical Revival and Peace in Rwanda: back to the Cultural Future?

Although we start with war, just like Picasso’s painting Guernica, this article is to promote art as a means to peace! As in some previous Conversation blogs, our concern is with how positive peace (and not just the end of war) can be attained through music. As with another previous Conversation blog, we also reflect on whether musical revival can avoid the negative associations of music with a violent past. And after all, what harm can there be in popular music? Well, in 2008, the International Criminal Tribunal for Rwanda (ICTR) sentenced Simon Bikindi, a Rwandan singer, to 15 years in prison, in part for his song lyrics. The ICTR Trial Chamber decided that two of his songs had: “the specific intention to disseminate pro-Hutu ideology and anti-Tutsi propaganda, thus encouraging ethnic hatred.” In addition, Bikindi called out names of Tutsi victims to be killed and actively supported ‘hate radio’ station, Radio Mille Collines. Based on all the evidence against him, Bikindi was found guilty of inciting genocide and of crimes of genocide. His appeal was rejected 2 years later.

Obviously, then, a musician can be guilty of inciting violence, war or even genocide. In light of the Bikindi case, it is no surprise that popular music from the 1980s has been somewhat suspect in post-genocide Rwanda. As in other societies recovering from mass violence and killings, musicians and other artists are expected to sing for peace. They want to disassociate themselves from the music of the past, linked in public perceptions with the politics of hate. Our study focuses on revival of Orchestre Impala, a popular band from the Habyarimana era of the 1970s-80s. We hope this musical revival signals a politics of cultural healing in Rwanda, and coming to terms with the cultural past. This example shows how popular music can contribute to peace-building in post-genocide Rwanda, and perhaps elsewhere.

Supported by a small grant for Rwandan researchers from the Aegis Trust, in 2015 we set out to research the revival of Orchestre Impala, the most popular band in Rwanda during the 1970s to 1980s. Could selective revival of pre-genocide era popular music signal some kind of recovery of Rwandans from a painful and traumatic past? To find out, we conducted interviews in Rwanda, Brussels and London. Our common theme was how music can help to promote reconciliation and healing. Could this musical revival help Rwandans acknowledge and make sense of the past, perhaps even start to heal wounds inflicted by genocide and war? Since the revival of Orchestre Impala had not received any serious scholarly attention, we decided we would speak to band members, former and present associates of the band. We would examine the song texts and videos, looking for new themes and old themes and what had been left behind. 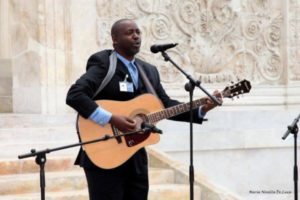 We are inspired by the work of Jean Paul Samputu, an internationally acclaimed Rwandan musician who uses words and music to express powerful acts of forgiveness. We also challenge the idea that everything cultural associated with pre-1994 Rwanda is tainted with the divisive genocidal ideology of the past. Is all pre-genocide music tainted? Can some positive elements of pre-genocide popular culture be recovered in Rwanda? Could this help to reconcile Rwandans with some elements of their pre-genocide history, so that healing can take place?

As the most popular musical group of an earlier era, we puzzled over the significance of Orchestre Impala’s revival. The band is now quite warmly accepted, plays regularly in popular city centre and rural venues, and is gaining (and regaining) followers. During the study, we were helped by Phil Clark and especially Jason Mosley, who helped us delve deeper into thorny issues of revival of old-time musical idioms from the Habyarimana era within contemporary Rwanda. What could this revival mean for peace and social healing today?

By 2012, when Orchestre Impala was revived, just two members of original line-up of Orchestre Impala survived. New band members, including the lead singer and songwriter Dieudonne Munyanshoza (aka Mibilizi) motivated old-timers to start playing again. Strangely, the new lead singer had what Mimi la Rose, an old-timer, called ‘exactly the same voice’ as the original lead singer Soso Mado (Jean-Félix Gasasira). In a way, this magical voice played a key part in the reviving of the group! And the revival was assisted by the fact that Orchestre Impala had split a few years before genocide, which meant that the political credentials of the two surviving musicians, Mimi la Rose and Pepe la Rose, were untainted by association with the Hutu power politics of that period.

As a hybrid musical form, Orchestre Impala’s music is part of a wider genre known colloquially in Kinyarwanda as igisope. The expression Igisope and the abasope (or old timers) conveys something about time, place and recovery all at once. At first the term meant a place on the road on the way to central Kigali, where at a bend in the road a petrol station and later a bar, once stood. Here old-timers started to meet immediately after the genocide ended, playing for an audience keen to return to some sense of normality. The place name then started to be used to refer to a kind of musical mix as igisope, and even to the old timers who were returning as abasope. The term is equivalent to ‘golden oldies’ in English. These songs and musicians, once viewed as tainted by association with the pre-genocide era, have gradually come to be accepted as almost mainstream. We wanted to know what this meant.

Igisope, which combines Congolese rhythms, Rwandan lyrics, international musical styles such as reggae and country, and examples can be found on YouTube and Facebook. By analysing a few song texts translated from Kinyarwanda, we were better able to examine the cautious revival of different elements of pre-genocide Rwandan musical culture. Old Orchestre Impala songs discarded from the playlist in concerts today include praise songs for long-lost leaders, such as President Mobutu of Zaire (now DRC) and even North Korean leader, Kim IL Jung! Other songs by the band have remained popular throughout, such as those celebrating New Year or falling in love. Finally some new songs, at least one of which talks of the great achievements of the present government. Just as in the past, those who pay the piper pick the tune, and in Rwanda this is certainly so for musicians, for the most part. Somehow, musicians also need to make a living, and usually this requires them to sing praise songs of one kind or another.

One goal of the band’s revival was simply – and importantly – to honour the memory of the band members who died during genocide. Another aim was to make a little money, including for the two remaining original members of the band. A third goal was to meet the popular demand for a sense of musical authenticity, rooted in the past, whilst avoiding too close an association with a traumatic history. Thus, the revival of Orchestre Impala is an exercise in testing how and to which extent certain pre-genocide cultural icons, forms, and expressions van be rehabilitated to fit the new cultural and political landscape of Rwanda.

For peacebuilding we suggest that this revival – apolitical as it appears – may be of more significance than it appears. So, either this had been one of Rwanda’s most careful and well-thought through cultural revivals, or a new era of shared Rwandanness is now starting to emerge. The NURC (National Unity and Reconciliation Commission) defines the goal of national unity and reconciliation in this way: “to promote the spirit of Rwandan identity and put national interests first instead of favors based on ethnicity, blood relations, gender, religions, region of origin etc”. In light of this, we conclude that Orchestre Impala may herald a new hopefulness that grants the pre-genocide cultural forms a wider expression in the construction of Rwanda’s future.

Rafiki Ubaldo has published newspapers articles in Rwanda and abroad since 2000. He also writes songs, poetry, fiction and long form feature articles. His scholarly publications include We cannot forget: interviews with survivors of the 1994 genocide in Rwanda, Rutgers University Press, 2011 (co-edited with Samuel Totten). He is currently co-editing (with Helen Hintjens) Arts, Music and Rebuilding Social Relations: Cases from Africa, Latin America and Beyond, Lexington Books, 2018. In 2011, he launched www.templesofmemory.org, an online exhibition of his photography. Rafiki Ubaldo is a founding member and past Vice-President of Capacitar Rwanda, and was on the Executive Board of The International Association of Genocide Scholars between 2011 and 2015.

Helen Hintjens teaches at the ISS, the International Institute of Social Studies in The Hague, a part of Erasmus University Rotterdam. Her areas of special interest are human rights and peace studies, especially in relation to post-genocide recovery in Rwanda in the setting of the wider Great Lakes region. She is also interested in research and advocacy around refugee and migrant rights, especially in the EU. Helen’s own special interest in this project came from previous knowledge of another Rwandan igisope band of the pre-genocide years: Les Huit Anges.