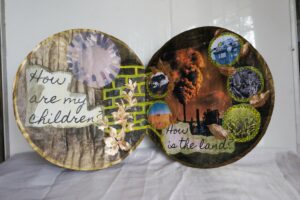 This brings me to the work of Pamela Enyonu “Nambi”, this project is an artist book in which Enyonu gives a sequel/epilogue to the tale of Kintu and Nambi, in the art book she weaves poetry and images to give the persona of Nambi a voice that engages with modern discourse, Nambi is reawakened to speak to those who thought of her as a thing of legend, in this book Nambi is engaging her audience in new lexicons and grammars (English) but she still speaks the language that her children knew her by.

/Aphasia/
Noun
(pathology) A partial or total loss of language skills due to brain damage.

Francoise Vergés in the symposium on building art institutions in Africa talks about the practice of mapping ‘invisible lives’, those not recognized by the machine of modernity, the cogs in the vast mill of capitalism and those colonized. Vergés studies the system of slavery as one that had at it’s core an aim to disembody the captive and transform them into a submissive automaton, to quote him
“….He or she wholly subjected to what the slavery system aimed to make of him or her: a person with no independence of thought and deed. a person with no form of expression, amnesiac and aphasic”
His exploration of the suppression of language systems and ways of seeing is my point of departure to explore in what ways the system rendered and continues to hold individuals and communities in the state of aphasia. Language is a study that is deeply fascinating due to many reasons but the one that stands out for me is the ability to mutate and grow as a tool to serve the intended purposes of the people using it, however if not used this tool rusts slowly until it completely crumbles. The language that I’m trying to describe is not purely a lexicon and grammar (it may as well be, but not restricted to this) it is a combination of images, experiences and ways of seeing that have been transmitted over time through the work of musicians, story tellers, artists and yes through grammars, lexicons, the many nuances of spoken and written language, however after the process of colonialism a cycle of trauma and subjugation have trapped and stunted the eternal growth, adaptation and transfer of this language. The question is not if damage has been dealt to the greater collective repositories of language but to the extent it has and if it’s effect (aphasia) is reparable. 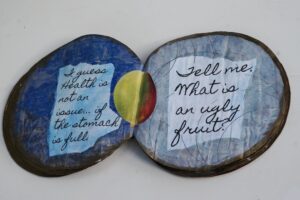 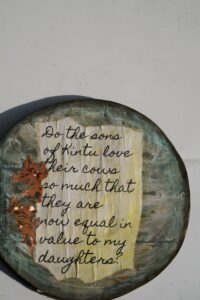 This brings me to the work of Pamela Enyonu “Nambi”, this project is an artist book in which Enyonu gives a sequel/epilogue to the tale of Kintu and Nambi, in the art book she weaves poetry and images to give the persona of Nambi a voice that engages with modern discourse, Nambi is reawakened to speak to those who thought of her as a thing of legend, in this book Nambi is engaging her audience in new lexicons and grammars (English) but she still speaks the language that her children knew her by.
Here is Nambi’s backstory summed up for unfamiliar audiences, the legend of Kintu the first man is where Nambi is manifested, Kintu the first man lived alone on earth subsisting on the milk and dung of his only cow, and after a chance meeting with Nambi and her sister daughters of an immortal god Ggulu she takes a liking to him and asks her father to show him the sky Kingdom he assents but only after giving Kintu a series of very difficult tasks Kintu with the help of natural forces and animals accomplishes all these and impresses Ggulu, in return Kintu is rewarded with Nambi’s hand in marriage and they descend to earth with gifts from heaven brought by Nambi, however on their journey they are warned by Ggulu not to return for any reason because if they did Nambi’s brother Walumbe (who is death or the god of it) will follow them and cause misery on their new found home, on the way Nambi remembers that she forgot millet for her chicken and goes back to her father to get it, Walumbe sees her and thus suffering enters the earth. 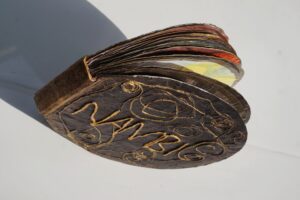 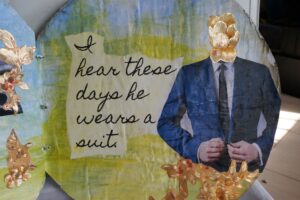 And that’s how the legend ends, with Nambi portrayed as the reason for death, her forgetfulness causing perpetual suffering, but Pamela Enyonu refuses to continue this narrative, her work awakens Nambi who asks humankind to recognize the gifts she brought to earth, she asks mankind to remember how the earth has provided for them and Nambi reminds them that Walumbe is simply a product of man’s desire to conquer and subdue nature. Walumbe mutates, he changes while Kintu is a dead relic. Walumbe is still working, gagging his sister’s message so that he can continue on his murderous rampage. 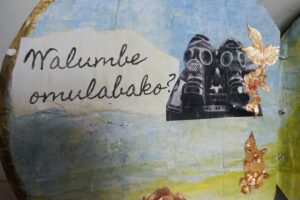 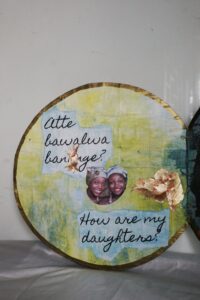 The “heroism” of Kintu is questioned in this book, Kintu in the legend is at once hero and victim and Nambi one of the most important characters in this story seems to only play the role of exposition in the contemporary telling of this legend. In Pamela’s book Kintu dominates that which helped him out of his squalor and for this his home is becoming desolate, nature was his ally and he turned against it, he abandoned the gods that knew him for doctrines that encourage him to exploit and justify his dominion, Nambi calls the children to explain where the customs they have now come from, the link to tradition and culture is beginning to form, controversial topics in traditional Bantu culture like dowry and the “possession” of women as property are brought to the forefront, and the conflict for many in these discussions is the need to preserve what is deemed heritage, the problem is that the language has been in limbo for too long that communities are too afraid to use and rearrange it or they don’t know how, but the time for that is now, our collective traditional languages must be inclusive there has to be space in there for the Queer, non-binary, for the women side-lined for so long, their voices have to be given back to them, then we can start the process of repairing the language we have and it’ll grow into stories and legends that tell our journeys. 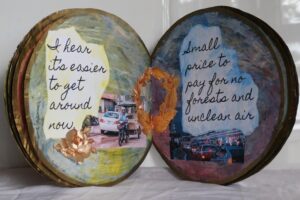 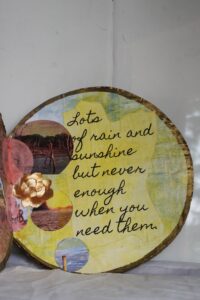 Enyonu is dissecting the archives to find the neuroses that were left by the traumatic assault on Nambi and her children by colonialism and its tools, she awakens the immortal goddess who now reaches us in a new languages but with the same voice, she cries but we can now hear, she laments but we now understand, her voice has been given back to her, the Aphasia is in the beginning of reversal.
This is what makes Enyonu’s practice poignant, it is an intervention, she is constantly trying to connect to ways of seeing in forms that stitch together old discourse and new tools of expression, the voice of the immortal Nambi reduced to a series of unfortunate mishaps is now amplified and rings with clarity to fill the void left by colonial and religious trauma, the patriarchy, and the unceasing machine of capitalism. The only way that societies can reclaim language is by using it, I liken it to a muscle that needs to be exercised otherwise it withers.
New ways of seeing are crucial now more than ever. 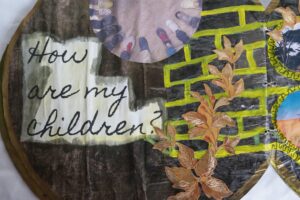 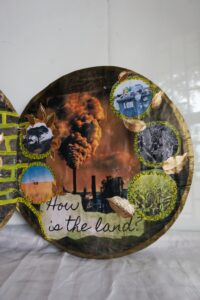 Trevor Mukholi is a scholar, art consultant and curator from Uganda