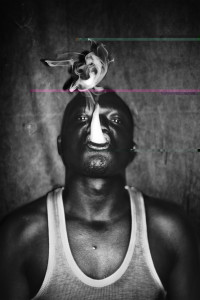 “Photography in Africa is growing in the sense that new publications are coming out featuring work by photographers from the continent, while also various festivals are sprouting and new talents are being featured in the various galleries abroad. Yet as I mentioned, we don’t have adequate institutions that support photography education and without education we will continue to face the challenges of not having quality work that is competitive with the international photo scene”, says Benjamin Füglister of POPCAP ’14 to Jorrit Dijkstra.

POPCAP ‘14
An African photo award with a mission

With photographic series about scarified people in Abidjan, the legacy of mines in South Africa and the initiation ritual of the Ekonda pygmies in the Democratic Republic of Congo the winners of this year’s POPCAP award show the African continent from a new perspective. The prize for contemporary African photography was held for the third time and sees its submissions growing each year.

“The way we define it, the POPCAP [www.popcap14.picturk.com] prize is awarded to photographic portfolios, either produced in an African country or deal with a diaspora of an African country”, explains organizer Benjamin Füglister from piclet.org. “Otherwise how do you classify an ‘African photographer’?” he asks himself. “We aim of course to discover talent that lives in Africa and until now we managed to do so, but the competition attracted 720 submissions from 88 countries this year – 24 of whom were from African countries.” Quite an increase compared to 140 submissions in 2012 and 360 in 2013, from just 57 countries. “We keep on growing and want to do so in a healthy and controllable way. Therefore we will operate in more languages than just English in the future and work together with libraries and social organizations to have photographers make use of their computers and internet to upload their work.”

The non-profit initiative aims to furthering engagement with the African continent within the photographic community and offers photographers the opportunity to receive international recognition and exposure to big-name personalities in the art world. According to Benjamin this is necessary in order to survive in the world of photography. “Therefore we want to link the winners to international events and introduce them to curators and museums. Their work will be exhibited at 7 major international photography exhibitions in Africa and Europe like an open air show in Basel, Switzerland, PhotoIreland Festival [www.photoireland.org] in Dublin, the Cape Town Month of Photography [www.photocentre.org.za] in South Africa, LagosPhoto Festival [www.lagosphotofestival.com] in Nigeria, Addis FotoFest [www.addisfotofest.com] in Ethiopia.” Next to that they also get a publication in the European Photography Magazine [www.equivalence.com].

With a price that could possible launch a career; the winners have to be chosen carefully. Therefore POPCAP has a panel of 24 internationally-sourced judges who choose the five best submissions, which must consist of a minimum of ten images, but not exceed 25. One of them is Jürg Schneider, historian from Basel, Switzerland and co-founder of the African Photography Initiative [www.african-photography-initiatives.org]. “I think the organization thought it was a good idea to have a historian in the jury”, he laughs. “I can compare the photographs in a more vertical way, instead of horizontal. But in general I’m also just very interested in contemporary African photography, so that’s a good combination.” For him it was the series of Patrick Willocq that was especially interesting (see below). ‘I am Walé Respect Me’ tells the story of the initiation ritual of the Ekonda pygmies in the Democratic Republic of Congo. The Ekondas believe that the most important moment in the life of a woman is the birth of her first child. This series is a personal reflection of women in general and the Walé ritual specifically. “His work can be compared to ethnographic photography from a century ago, but in a contemporary way. The pygmies didn’t get pushed around by him, but they work together – that’s a big difference.” Regarding the work of Joana Choumali and Ilan Godfrey, Jürg is fascinated by the link between past and present on the African continent. “They manage to show the difference, the tension and the coming changes”, he explains. Benjamin agrees with him and says that the jury looks at the quality of the work on all fronts, as a whole. “For example the work of Joana Choumali; the subject might not be the most original one, but it’s technically good and she researches her own identity with it.” 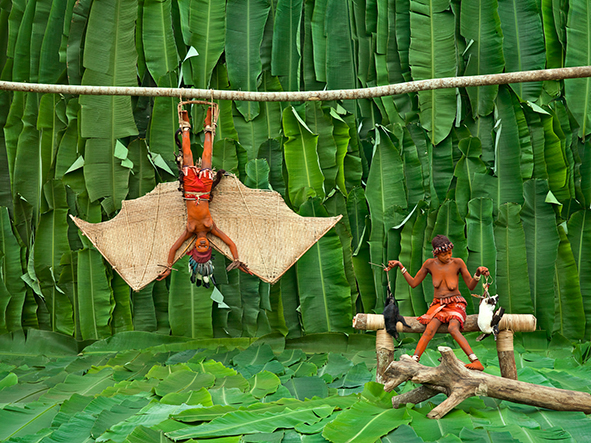 Another member of the jury, Aida Muluneh, artist and director of Addis FotoFest in Addis Abeba, Ethiopia agrees with Jürg when considering the work of this year’s photographers. “Overall, the submitting photographers had strong work. I was my second time as a jury member and the only critic I have is that I would have liked to see more submission from photographers from the continent itself. Because they come from a different cultural backgrounds they see their own community differently and that subsequently impacts their photography”, Aida says. POPCAP only had one submission from Burkina Faso this year, while other countries – namely Nigeria and South Africa – were much better represented. According to Aida that’s too blame on the fact that there is a lack of adequate training that teaches African photographers to become part of the international photography market.

Benjamin adds: “There are no art schools, courses or anything related to photography in most African countries. This needs to change, because without a market – or a very small one – there is no chance for these photographers to show their work to the outside world.” Also Jürg shares that opinion, stating that there might be more galleries, shows and curators promoting photography, but it’s still very marginal. “Photography is still not a collectable item for many Africans. How many art museums are there in Africa and do they focus on photography? The answer is no. I asked somebody from Stevenson Gallery in Cape Town if they thought the photography market was growing on the continent and he didn’t think so either. So we agreed; the market is in the west.” Therefore they all think POPCAP is of such importance, giving upcoming photographers concerned with the African continent a podium. “To build a big community around photography”, replies Benjamin. 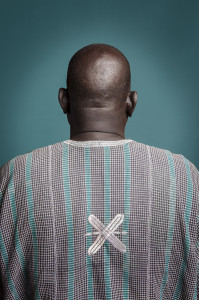 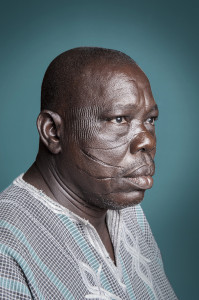 One of the above mentioned winners, Joana Choumali [www.joanachoumali.com] (1974) from Ibidjan in Ivory Coast, is therefore very content being one of the winners of this year’s POPCAP. “It means a lot to me because it’s a good opportunity to get my work seen internationally, but above all it’s an honor. It has been a rewarding experience from an artistic and human point of view. Winning this price motivates me for the future and assures me in the idea that the track I have chosen is the right one.” In her winning series ‘Hââbré, The Last Generation’, shot in 2013-2014, she presents portraits of the ‘last generation’ of scarified people in Abidjan. The series questions identity in a contemporary Africa, torn between its past and present. “In the Kô language of Burkina Faso the word Hââbré means both writing and scarification. Scarification is the practice of performing a superficial incision on human skin. This practice is disappearing due to pressure from religious and state authorities, changing urban practices and the introduction of clothing within tribes. Nowadays only the older people have scarifications. While conducting my research, the majority of images I could find were from the beginning of the 20th century, and only a few contemporary images. I also had trouble finding scarified people to photograph because of their rarity.” She had the feeling this subjects speaks to everybody, even if it depicted from an African point of view. Joana considers it a universal subject and started the series to testify, not forget and ask questions about the contemporary African identity. 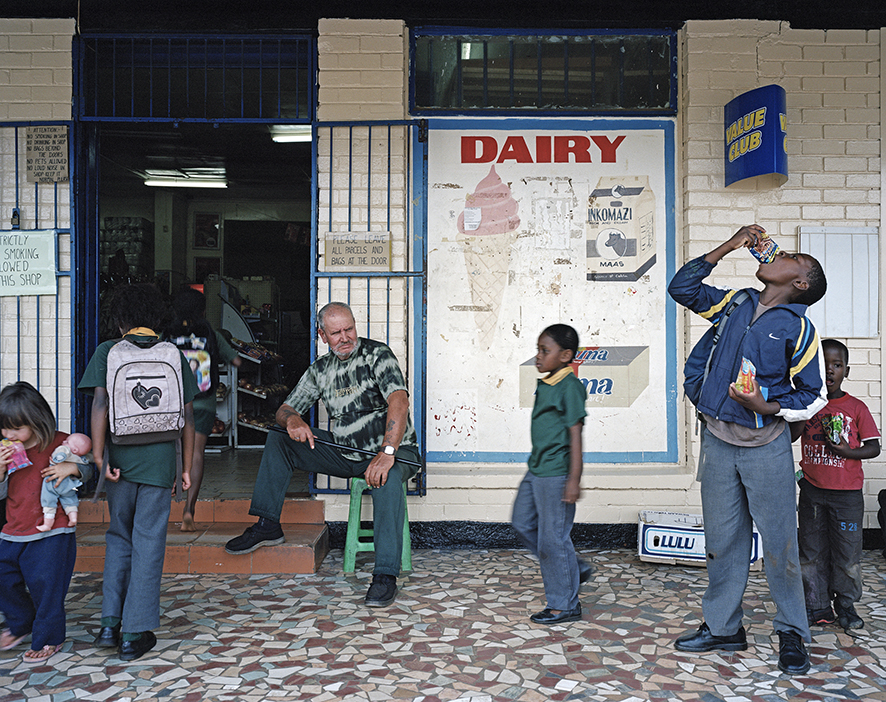 Another one of the winners, Ilan Godfrey [www.ilangodfrey.com] (1980) from Cape Town, South Africa, also went looking for explanations to the struggle for identity in his own country, but approached this from a whole different perspective. With ‘Legacy of the Mine’ (2011–2013) he took a closer look at ‘the mine’ – irrespective of the particular minerals extracted – playing a central role in understanding societal change across South Africa. “This is comparable to mining concerns around the world”, he explains. “I wanted to bring the countless stories of personal suffering to the surface and reveal the legacy of ‘the mine’. For more than a century, South Africa’s demand for gold, diamonds, coal and platinum has gone from strength to strength, often shifting in accordance with the political economy and the availability of foreign markets. Mineral exploitation by means of cheap and disposable labor has brought national economic growth, making the mining industry the largest industrial sector in South Africa. I wanted to create a visual representations that gave agency to these forgotten communities working around these mines and display public health crises within local communities unequipped to cope with the burden of air, land and water pollution, focusing on the disruptive influence of historical labor exploitation impacting on familial structures and cultural positioning.”

“We’re not looking for images of violence and poverty, because that image has been shown enough already. We’re not on a mission, but do want to show our audience that Africa has a different side. Yet we’re also not looking for documentary photography per se, even though three of the projects that won fit in that category, but we’re definitely not looking for art photography”, explains Benjamin. “It’s not even possible to determine a specific style from a country. We had a few projects about AIDS, about homosexuality and gender issues, but the rest was concerning other subjects.” 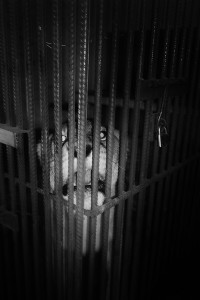 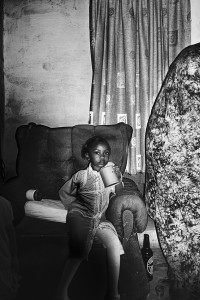 Like the series of Belgium-Congolese photographer Léonard Pongo [www.lpongo.eu] (1988), titled ‘The Uncanny’ (2011–2013). He was surprised to be selected and actually won, especially because of the size of the jury who has to reach a unanimous decision. “It didn’t think it would fit within their scope, but apparently it did”, he laughs. “It’s a documentary project that has been conducted in Democratic Republic of Congo since the political elections held in autumn 2011. I aim to show the collateral impact on the daily life instead of the direct hits. It’s been carried out by accompanying family members, political personalities, religious leaders and local TV in order to document the events that rhythm the lives of the country‘s inhabitants and try to understand Congolese society and recover part of my own identity. My need to see my country from a different point of view than the so often depicted crises, combined with the openness of people to share their most intimate moments with me and my willingness to be accepted as part of their lives, allowed me to depict my country intimately and subjectively, not trying to deliver a truth, but striving to understand people‘s realities and to reconstruct my own.”

“The winners get a public through POPCAP, which is perhaps not a necessity, but it’s an advantage for all parties involved. Also for the viewer, because they see an Africa that is way more happy, more real”, says Jürg. “For a very long time there has been an unbalanced view of the African continent, today – and with the help of this prize – that view gets more balanced and African photographers take their representation in their own hands”

“There is no photographic consciousness on the continent yet, that is something to be developed over the next two decades. That will lead to a better visual representation of Africa.” ends Benjamin. Aida: “Photography is full of limitless possibilities and as you know image is power. We have to be able to represent our stories to create a balance on what is already out there which at times doesn’t offer the full picture of the complexities of Africa.”