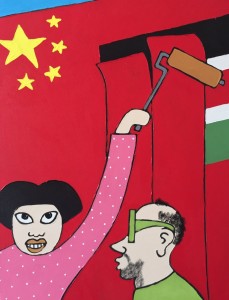 WHAT IN THE WORLD?
Reconciling the controversy about the ‘Kenyan’ Pavilion at the 56th Venice Biennial

Caught up in the commotion around the ‘Kenyan’ pavilion at the Venice Biennial, the art world is incensed by the news that trickster Armando Tanzini, an Italian with Kenyan citizenship, has duped them again. Having organized what he has craftily branded the Kenyan pavilion at the 56th biennale, the selection of artists is yet again principally Chinese. Tanzini and accomplices pulled a similar scam in 2013, strolling away scot-free.

If this is the first you are hearing of the scandal, yes, you read that right. Absurd as it is, the Kenyan pavilion at this year’s Venice Biennial, commissioned by Italian Paola Poponi and curated by Sandro Orlandi Stagl and deputy curator Ding Xuefeng, features a band of Chinese nationals. The artists include Qin Feng, Shi Jinsong, Li Zhanyang, Lan Zheng Hui and Li Gang, Italian-born artist Armando Tanzini and one Kenyan filmmaker, Yvonne Amolo, who lives in Switzerland.
With the extraordinary flowering of the Kenyan contemporary art scene in recent years, any savvy collector, art aficionado or casual reader of art news in Kenya and overseas would agree that there is a substantial list of talented Kenyan artists whose work would have surely impressed the biennial crowd. Popular Kenyan artist Michael Soi, whose artwork features in numerous international collections, has drawn attention to the controversy through his paintings The Shame in Venice I II and III.
Painted in Soi’s familiar style, using bold charcoal lines and luminous colour, the reactionary series features the Chinese artists fraudulently representing Kenya. The Shame in Venice III, completed on April 19th, is Soi’s latest satirical expression, depicting a Chinese artist masking the Kenyan flag with the Chinese flag while Tanzini watches. Soi speaks for the many Kenyan artists who say the pavilion has nothing to do with Kenya, and should not be branded as such. It seems the art world is holding its breath and hoping that when the 56th Venice biennale opens on May 9, the so-called Kenyan pavilion will have either been renamed or completely withdrawn. 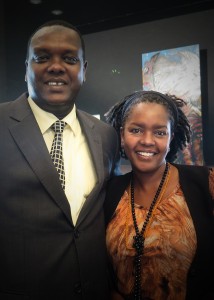 *In a recent interview with NPR, Tanzini seems to brag to East African correspondent Gregory Warner that if it wasn’t for his efforts there would be no Kenyan pavilion at all. He says that it wasn’t solely his money that went towards the 2015 biennial, but does not say who else contributed. He also admits that he paid hundreds of thousands of dollars to attain the pavilion in 2013. Regarding his participation this year, he said, “Unfortunately, if I want to bring Africa, or Kenya, I must compromise in some way. Compromise because we have no the money.” Tanzini suggests that Kenya does not have the funds to secure a pavilion. Whether or not this true, there is no excuse for the misrepresentation of Kenyan talent at the Biennial.
Determined artists and devotees of the Kenyan arts community cannot bear to be robbed of their identity or post again. So, in the first week of April, Kuona Trust Centre for Visual Arts in Kenya sent an open call to artists, galleries, agencies and other affiliates of the arts, to gather for a roundtable meeting on April 8th and deliberate on a way forward. It was agreed that the primary goal was to ensure that the Kenyan name and flag be removed from Tanzini’s pavilion at the upcoming Venice Biennial.
At the crowded roundtable, an interim board was voted into place to represent Kenyan artists to the Kenyan government ministry. Voted to the board were the acclaimed Kenyan artists Justus Kyalo and Paul Onditi, up-and-comer Wambui Kamiru (an artist from Kuona Trust), General Manager of the Nairobi GoDown Arts Centre Judy Ogana, Director of Kuona Trust Sylvia Gichia, and Art Curator from the National Museums of Kenya Lydia Galavu. The board, accompanied by artists Thom Ogonga and Michael Soi, met with Cabinet Secretary (CS) Dr. Hassan Wario Arero from the Kenyan Ministry of Sports, Culture and the Arts at 9:00am on Friday April 10. 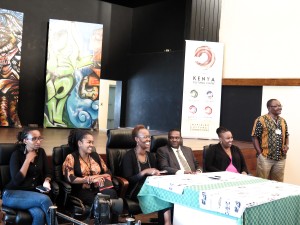 *Why Are Chinese Artists Representing Kenya At The Venice Biennial?
http://www.npr.org/blogs/goatsandsoda/2015/03/30/396391120/why-are-chinese-artists-representing-kenya-at-the-venice-biennale