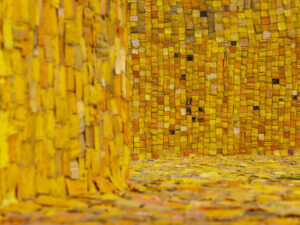 Serge Attukwei Clottey is attracting well-deserved attention for his striking installation The Wishing Well, created for the edition of Desert X 2021, in Coachella Valley, California. Composed of two large cubes covered in yellow plastic, the installation draws on Clottey’s signature use of cut-up plastic jerrycans, derisively known as Kufuor Gallons in his home country of Ghana

Jean-Christophe Maur on The Wishing Well of Serge Attukwei Clottey

Serge Attukwei Clottey – The Wishing Well of Accra and Coachella 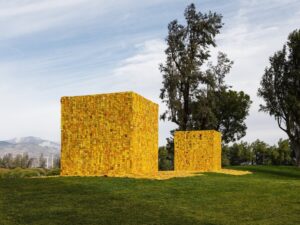 Serge Attukwei Clottey is attracting well-deserved attention for his striking installation The Wishing Well, created for the edition of Desert X 2021, in Coachella Valley, California. Composed of two large cubes covered in yellow plastic, the installation draws on Clottey’s signature use of cut-up jerrycans, derisively known as Kufuor Gallons in his home country of Ghana (after John Kufuor, the country’s president during the water shortages that plagued Ghana at the beginning of this century). Jerrycans initially used for cooking oil are still repurposed to transport water in cities where access to running water has long been—and remains—a challenge. As recently as 2011, it was estimated that only one-third of the population of Greater Accra had access to piped water. As a child, Clottey used to fetch water in jerrycans for the household. Cut up into squares that are then attached with pieces of copper wire, the humble containers are transformed into stunning and expansive works of art. The centrality of the jerrycan material—with its connotations of waste, recycling, water insecurity, and the legacies of colonialism—is encapsulated by Attukwei Clottey’s reference to his work as Afrogallonism.

*
The reverberating echoes of these themes in The Wishing Well attest to the importance of site-specific art to Clottey’s practice, which is varied and encompasses sculpture, photography, video, the “paint-less paintings” of his HDPE plastic tapestries, and performance. His performances, especially, are firmly rooted in the community of Labadi, where he grew up and to where his studio is based. Consistent across the different media are Clottey’s assemblages of jerrycan pieces, which are recycled and—literally and symbolically—traded back to where they came from, through networks of galleries and art collectors. However, Clottey’s practice also resists the uni-dimensional trajectory of African art finding success in the West, as evinced by his move to recreate The Wishing Well in his Accra neighborhood of Labadi.
Clottey’s approach aligns with the roots of land art in the 1960s both as an escape from the confines of institutional spaces and as socially engaged practice. But it is also a new departure, and one that remains rare—if not unique—among contemporary artists in Africa. It offers a singular connection to materiality and place and brings together the distant communities of his native Accra and the art-loving audiences in the West, where his art is finding growing success.

I make my work very accessible to the community, because I think the community is part of my process.
Clottey’s attachment to his place of origin is not limited to the act of return, which is not unusual for many artists from Africa and the African Diaspora who give back to their birth or ancestral land after success abroad. Examples include Ablade Glover’s Glo Art gallery and the Artist Alliance in Accra, Barthélémy Toguo’s Bandjoun station, Ibrahim Mahama’s Savannah Center for Contemporary Art in Tamale, or Kehinde Willey’s Black Rock in Dakar. Clottey’s art is about home: Adesa We, “story telling home.” At the same time, “home” is inextricably tied to migration, as expressed in Clottey’s performances, and the symbolic economy of the jerrycans (first to Africa as oil container, then back to the West as art).

*
Social practice is integral to Clottey’s art, steeped in the community of Labadi (“La”), a neighborhood bordering the ocean in the capital city of Accra, from which he hails and where he lives. Clottey invites the residents of La to engage with his art, in and outside his studio, in the streets of the township, working with the community in the production of the art works. To this end, Clottey founded GoLokal, a collective that has grown to about 100 people, to produce performances as well as his painstaking and extensive artwork. Performances with GoLokal include: the Chale Wote festival since 2013; The Displaced, 2015; The Gods Must Be Crazy, 2015; My Mother’s Wardrobe, 2016; and 360LA, 2018. With GoLokal, Clottey addresses issues that are important to his Ga community: histories of voluntary and forced migration, the role of women, environmental pollution, access to water, and commercial exchange between the West and the Global South. 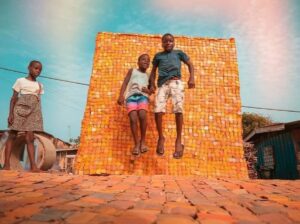 Neither these themes, nor the weaving of found, recycled materials into substantial tapestries are in themselves new; there is an obvious debt to El Anatsui, a pioneer of the process. Clottey continues the discussion initiated by El Anatsui but expands it in several directions. One cannot help but contrast Clottey’s studio with El Anatsui’s. Both practices are manual and labor intensive. Like Clottey, El Anatsui draws on the help of numerous assistants, but his studio is calm and collected: a “sacred place,” in El Anatsui’s own words. Clottey’s studio, on the other hand, radiates out from his home into the surrounding neighborhood and its inhabitants, who participate in boisterous performances. In the course of Clottey’s socially engaged art practice, the ubiquitous material of the jerrycans is reactivated in the very community of their primary use. The fluid nature of Clottey’s practice rests on an informal economy where Kufuor gallons are purchased from and cut up by informal labor (remunerated by the artist) and the installation undertaken without the need for bureaucratic permitting and authorization (save from neighbors and family). 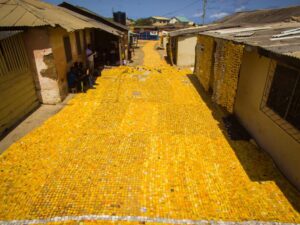 The site-specificity of Clottey’s practice, rooted in his neighborhood, has yielded one of the most striking land art works in recent years in Africa. The installation, which became widely known as The Yellow Brick Road, after the BBC covered it, was created in 2018 for the 360LA open-air exhibition. It has since morphed into a recurring street installation that covers the area around Clottey’s studio. With a version of The Wishing Well now recreated in La as a mirror of the work in Desert X 2021, Clottey’s studio is once again open to the neighborhood, offering—through a powerfully symbolic gesture—the opportunity to La residents to share an artistic experience with Californian art lovers.
Land art has been rare in Africa, with the notable exception of South Africa’s Strijdom van der Merwe and his Site Specific international land art event. There are probably good economic reasons for the scarcity of land art installations in Africa, given that they are a form of art that requires significant upfront investment, is near-impossible to sell, and relies on robust art ecosystems of patronage and promotion. 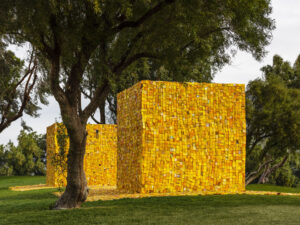 In this relative void, Ghana has recently emerged as the site of a new land art expression in Africa, with both Clottey and Ibrahim Mahama engaging in a direct dialogue with the city. Mahama was first to win acclaim for his 2012 Occupation Series in Kumasi, which covered buildings with quilts made of jute sacks that used to transport cocoa and coal. The discarded jute sacks, metonyms of absent workers’ bodies, migrated to other public spaces: the Mallam Ata Charcoal Market in 2012, the KNUST Museum in 2013, the Adum-Kejetia Railway Footbridge Project in Kumasi, and the Civil Aviation building in Accra in 2014, the Malam Dodoo National Theatre in 2016, and the KNUST university Great Hall in 2018. Through his installations, Mahama symbolically reclaims these spaces on behalf of the people.
Like Mahama, and quite recently El Anatsui (in the exhibition Triumphant Scale at Haus der Kunst), Clottey uses his material tapestries to cover buildings and outside spaces.

The process invites comparison with the oeuvre of Christo and Jeanne-Claude and their monumental use of fabric around buildings and natural landmarks. While their memorable works occupy a solid place in the canon of land art, Ghanaian artists are not simply replicating a spectacular process. Mahama has found the analogy lazy, in the same way that a superficial critique might tag Attukwei Clottey as an imitator of El Anatsui. The found materials used by El Anatsui, Mahama and Clottey carry extra layers of meaning that bear on the practical and aesthetic purpose of their interventions. Undoubtedly, the material used in the art of Christo and Jeanne-Claude should not be reduced to simple aesthetics and functionality: their career was after all framed by the 1962 Berlin Wall project and the 2018 Mastaba which both used oil barrels as their constitutive elements. Interestingly, the metonymic quality of the Kufuor gallons used by Clottey (and the cocoa and coal bags used by Mahama) are reminiscent of the oil barrels of Christo and Jeanne-Claude. There is, nevertheless, a substantial symbolic and qualitative difference in the materials used by the practitioners of this new, emerging African land art, which directly relates to legacies of colonialism, the individual consumption experience of contemporary Africans, and the commercial connections between rich and poor worlds.

Where Clottey’s art distinguishes itself is in his direct relation to the community and the social engagement of his art. In Clottey’s land art installations, the landmark does not precede the intervention, but is created by the intervention itself. Unlike Mahama, he does not work with a highly recognizable or symbolic site: his neighborhood in La is–on the contrary–unremarkable, indistinguishable from other parts of La and Accra, a modest middle-class Africa neighborhood among the many sprawling ones that encircle African cities. Clottey’s 360LA The Yellow Brick Road calls attention to his immediate neighborhood and the challenges faced by its residents. Here the goal is not a symbolic occupation, as in Mahama’s work, but a direct call for the affirmation of La residents’ property rights, with the yellow brick road as a property land marker.
The Yellow Brick Road and The Wishing Well have affinities with other catalytic works of land art such as JR’s  Women are Heroes in Kibera (2009) in Nairobi, and Vik Muniz’ Waste Land (2011) in Rio de Janeiro, which so successfully directed the world’s gaze to places too easily ignored. We should be grateful to the artist for inviting us to his home.

Katy Donaghue, Serge Attukwei Clottey Uses Performance to Address Political, Social, and Local Issues, Whitewall, 3 April 2019. [for Serge Attukwei Clottey quote: “I make my work very accessible to the community, because I think that the community is part of my process”] https://whitewall.art/art/serge-attukwei-clottey-uses-performance-to-address-political-social-and-local-issues