It all started with a show by Austrian artists at the Alliance Française in Nairobi in March 2006. Drawing from their different perspectives, the artists from Vienna (Barbara Husar, Michael Lampert, Alexander Nikolić and Lukas Pusch), and Sam Hopkins, based in Nairobi met with the residents of Mathare, a slum of 500,000 people in Nairobi. In meeting with the residents, the need for an authentic story highlighting the lives and times of the residents was mooted and slowly developed. After numerous interviews, of the different stories from the different artists’ perspectives, a documentary fusing the different stories was developed. It was, in essence, the very first general test for what would be slum tv and therefore sought to very authentically speak to the real-life stories of the residents of Mathare slums. In the words of SLUM TV co-founders, the vision and values continue to drive our narrative because after all – from it did we arise!!

In 2006, Sam Hopkins embarked on participatory project based in the informal settlement of Mathare, Kenya. Through a collaboration with Vienna-based artists, Barbara Husar, Michael Lampert, Alexander Nikolić and Lukas Pusch, Hopkins developed Slum-TV—a video production company that sought to share real stories of the lives of slum dwellers. The group of artists travelled around Nairobi’s mega-slum teaching young men how to write, film, and edit videos. With enough interest, Slum-TV had its first public screening in 2007 with over 1,000 people in attendance. The videos presented included sitcoms, short sketches, dramas, and documentaries—all of which set in Mathare and used local residents as subjects/actors. Since then, Slum-TV has continued to educate young people on video production and holds a screening for the Mathare community once a month. (1)

Slum-TV is but one of many projects by Hopkins that begin to subvert and (re)construct an aesthetic paradigm that has largely been shaped by non-African institutions, organizations, enterprises, and media—the ‘NGO Aesthetic’. NGO’s and other foreign media sources are producing an overwhelming visual language about Africans which, almost oppressively, bleeds into local communities, drastically impacting how individuals view themselves. Hopkins, through his work and participatory projects, is interested primarily in the lived experiences of those in Kenya that have long been absent from the realities curated by mass media. With the attempt to make the invisible visible, Hopkins’ artistic practice centers around creating spaces in which local communities can begin to rewrite their own narratives based on their many lived experiences.

*
Through the lens of the camera, young and emerging artists in Mathare are able to imagine and construct new realities and bring them to life for their immediate community. The primary audience for Slum-TV, unlike other video production projects happening in Kenya, is Mathare. This project, in its entirety, is for the community in a way that critically redistributes content back to its originators, mirroring the environment and experiences from which it came. This is evident through the monthly video screenings located within Mathare. The outdoor venue brings together the community for a temporary exhibition of short sketches or news reports, screened before a feature-length movie or documentary. 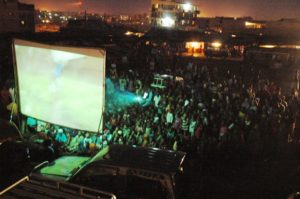 An image of a Slum-TV screening. Photo by Sam Hopkins.

The creative enterprise within the Slum-TV project can be seen at almost every stage of its process. Yet what remains to be, what I argue, the truly transformative potential of this project lies within the screening space. As sort of an informal video theater—one without chairs or physical boundaries delineating the space—these screenings are meant to be temporary and portable. Each month a projector and screen are set up in a different part of the settlement and soon after the showing, are disassembled and the physical space returns to normal. Thus, these screenings are only moments of artistic expression, or as Till Förster calls it, ‘flickers of creativity’. (2) However, though the screening space comes and goes, I argue that it holds lasting influence on the lives of the local community. The screening site, as a collective space to view Slum-TV, conceptually redefines the place of Mathare. It is a space in which local artistic expression is celebrated and magnified and a space in which the local community is able to witness the potentiality of their home. Furthermore, Slum-TV’s screenings serve as a socio-technological space where Mathare is reimagined through video which transforms how the local community understands the complexities of this place as well as their relationship to it. These screenings create a utopic potential in which the local community is able to redefine themselves, emancipating themselves from a global aesthetic regime of representation.

*
Slum-TV holds a core belief that through video, those in Mathare are able to create their own stories of dreams, survival, and passion. Some choose to document their community, with subjects ranging from small moments, like the life of a woman who sells potatoes, to the impacts of national crisis, such as the violently contested presidential election in 2008. (3) Yet others use their lived experiences and interactions within the community as inspiration for creative works, utilizing video as a tool for storytelling. By marrying the aesthetics of cinematic tradition with the specificity of local issues, Slum-TV films explore the convergence of real and imagined realities. 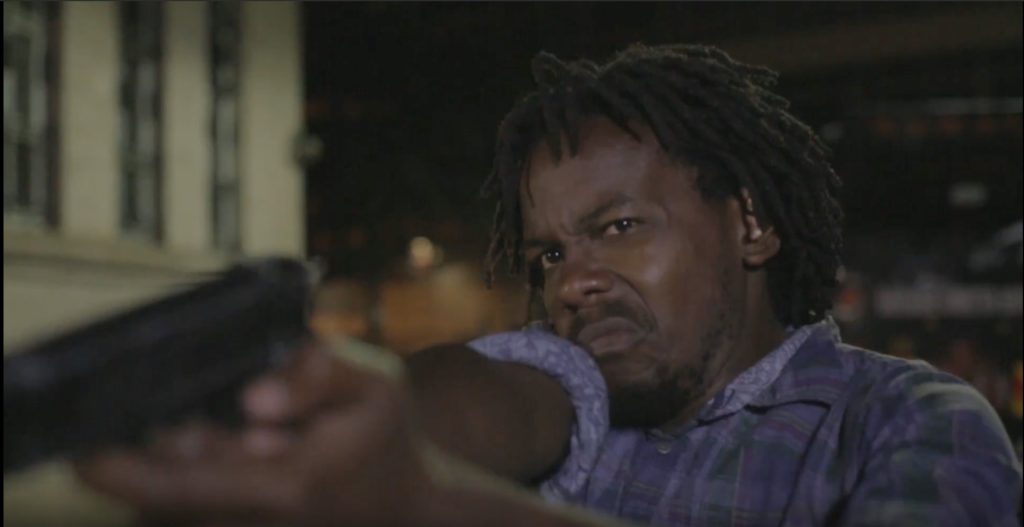 A still from the trailer for First Draft, published on YouTube in 2017.

The trailer for the film First Draft depicts, or rather imagines, a new narrative set within the Mathare settlement. (FIG. 2) First Draft presents a ‘fake realism’ that plays on familiar tropes of rogue dramas—an unexplained gun, a man suddenly confronted with a life or death decision, and an unidentified woman in red who gets mixed up in it all. What seems like a familiar narrative, First Draft fits into a body of cinematic fiction, a drama which can easily be reduced to a prescribed series of events. In many respects, the narrative of First Draft fits within a larger canon of cinematic story-telling. Borrowing the tropes of Hollywood, First Draft raises the question of authenticity. If the narrative’s framework is similar to so many other movies then to what extent is this film an original product of Mathare? Its essence does not originate from within the local community, but rather through a dominating aesthetic within the larger realm of cinema. If such a critique is made, and it is convincing one, then the Mathare filmmaker loses a great sense of agency. He or she is but a ‘conduit of corporate ideologies,’ subconsciously influenced by imposing aesthetic traditions. (4)

*
Yet the transformative potential—the innovation—of Slum-TV films does not rely on narrative, but on the imagined reality presented on screen—a reality that transforms the lived reality of Mathare. The place of Mathare becomes the setting of a new drama, energized through the cinematic narrative. The people of Mathare take on imagined identities, new ways to engage with others and their surroundings.
These videos are transmitters, systems of communication that are relayed producing meanings that are both different from and similar to the original source. The information that a video like First Draft relays transcends the story, but it is through the story that allows for the audience to recognize themselves in new ways. From an imagined story, these films identify a potential space—a creative space—for Mathare, one in which blends into other spaces that establish its essence as a place. Through this, a viewer is able to expand their “understanding of who [they] are and of the nature of the larger groups and communities to which [they] belong.” (5) 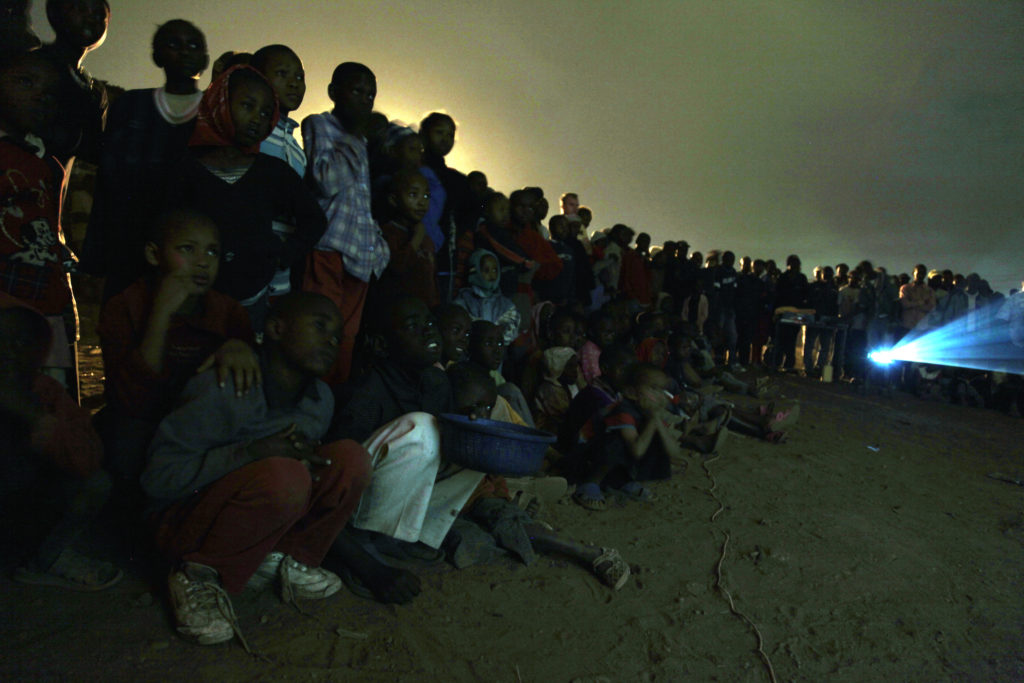 Crowds gather to watch what Slum-TV has been filming. Photo by Paula Geraghty. 2009.

The public screenings of Slum-TV magnify and radicalize an individual’s viewing experience within and towards a collective one. The screening space becomes animated through the organization of its audience, as people either sit, stand, or move between the two. With consistent attendance, ranging from the hundreds to thousands, these events bring together a significant subsection of the settlement where the multiplicity of individual identities converges into a collective sense of community. Each individual’s engagement with video, which includes the experiences and ideologies they have entering the screening, compliment, contradict, and feed off of others. It is in this space that the individual reactions begin to regulate one another, creating collective engagement that is dynamic and malleable.

*
This dynamic is essential to the viewers’ ability to witness themselves within these videos and movies. As mentioned earlier, movies like First Draft reinvent Mathare as a fictitious world in which new characters and new realities develop. The fictitious space becomes compressed with the lived space of Mathare, which is realized during these screenings. As a viewer engages with these videos, fantasizing through the lens of the new realities, they are reminded of the actually place in which these narratives unfold, the place in which they are currently situated. It is through this moment that the viewer can begin to critically assess the interlocking layers of real and imagined. This assessment, the inner reconfigurations of Mathare and their relationship to it, relies on the interaction with others. As with any attempt at identity formation, the individual is dependent on the affirmation and help from others, if only to validate their self-development. (6)

It is through these nuances of the socio-technological and socio-spatial that exist within the screening space that we can acknowledge its creative potential. The manipulation of the video form, which includes grounding every stage of production within the local community, directly challenges the conventionality of film and movies in popular culture. Not only are these artists non-specialized, but the films themselves are distributed to a specific audience. The screening space, which is designed to be a temporary exhibition site, allows its audience to collectively watch these movies within the same environment depicted on screen. The conflation of real and imagined is actualized in this space which challenges the individual spectator to recognize themselves within a new sense of place. A Slum-TV screening is a site of creativity—a temporary moment in which Mathare becomes a place of art and its community become authors of their own stories.

*
Through this flickering of creativity, there ignites a utopic potential. By this, I mean that it is the spark towards something new—one that “reject how things are now as being the only possibility,” while simultaneously “offer something positive and attractive.” (7) Slum-TV nestles quite appropriately within these two facets. Its creation was in response to the (mis)representation of the slums within a global aesthetic, which is strongly solidifying the idea that slums are stunted by impoverty. But in doing so, Slum-TV utilizes the same technological tools and modes of representation to subvert this ideology and present a new way at understanding the slums. The creative space of the screenings, where all agents of this participatory project interact, could be this potential utopia. However, given their temporality, these spaces better serve as moments of utopic creativity which communicate new ways for the Mathare community to understand themselves.

*
And it does not take long for the community to embody the creativity of Slum-TV. It is common at monthly screenings for audience members to interact with the movies, celebrating their artistic expression. After the movies are over, people sustain the creative energy of the space by rapping, singing, and dancing. The space transforms from movie screenings to live performance. It is in these moments that the Mathare community actualizes the creative potential of the space, creating something completely new. (8)