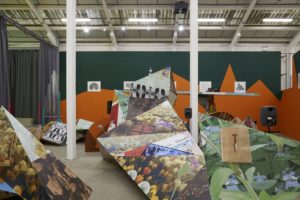 “In the Castle of My Skin starts with the metaphor of skin as a covering, a surface, a barrier, a marker of identity and a connector between internal and external worlds. This builds on the intersection of diverse histories as a recurring theme in Boyce’s work…Boyce is fascinated by moments of serendipity that occur when people are brought together without a script.”

In the Castle of my Skin and its Black Influences

Sonia Boyce has long since been an important figure in the art world. The Afro-Caribbean artist was born in 1962 and has worked with drawing, photography and prints to name a few of her chosen mediums. For the most part, her art debates and explores the relationship between memories, use of space and social practice. Sonia currently works as a Professor of Black Art and Design at the University Of Arts London (UAL).
After graduating from Stourbridge College of Art in 1983, she was involved and later became one of the main figures in the British Black Arts Movement during the 1980s. Boyce’s earlier pieces focused on race, contemporary social issues and gender. She collaborated with many artists to create improvised spontaneous work; not afraid to incorporate audio and visual elements into these sessions, in order to create the finished piece.

The Tate later bought some of her paintings which dealt with contemporary racial issues. Throughout the years Boyce has been featured in shows such as Sonia Boyce: Speaking in Tongues, Video Positive: the other side of zero, Century City: art and culture in the modern metropolis, Crop Over and For you, only you. In 2010 she was also showcased in the Afro Modern: Journeys through the Black Atlantic exhibition in Tate Liverpool.

*
On 24th January 2020 Sonia’s new exhibition In the Castle of my Skin will open for a three month run at Eastside Projects in Birmingham. Featuring existing and new work by Boyce, the show also hosts seven artists’ pieces co-curated by Boyce herself. These artists include Anna Barham, Katie Cooper and Harold Offeh to name a few.

*
Eastside Projects describes the exhibition as a kind of intersectional work: “In the Castle of My Skin starts with the metaphor of skin as a covering, a surface, a barrier, a marker of identity and a connector between internal and external worlds. This builds on the intersection of diverse histories as a recurring theme in Boyce’s work…Boyce is fascinated by moments of serendipity that occur when people are brought together without a script.”

*
Indeed for over 20 years Boyce has collaborated in an improvisational way. In the Castle of my Skin is no different by extending “the artists’ collaborative, improvisatory techniques by making a group exhibition housed in, on and around the artwork co-curated by Boyce and Eastside Projects.”
The title of the exhibition was inspired by George Lamming’s autobiographical novel of the same name. In 1930s Barbados a young man’s life is chartered amidst a time of great societal change. The protagonist, called G, becomes alienated when he comes to London at the age of 23. It is a coming-of-age and loss of innocence narrative. Lamming, like many of his generation, considered Britain a second home and when travelling from the West Indies he and other black immigrants thought they would be welcome. He says “It is the measure of our innocence that neither the claim of heritage nor the expectation of welcome would have been seriously doubted.”

In fact there was an ongoing movement of Caribbean diaspora immigrating between the Commonwealth islands and the UK, due to the post-war shortage of labour and the propaganda that a better life was waiting for them in their spiritual home. Lamming continues, “…at the time of writing, any conscious effort on my part to emphasise the dimension of cruelty that had seduced, or driven, black people into such lasting bonds of illusion. The novel was completed within two years of my arrival in London. I still shared in that innocence that had socialised us into seeing our relations to empire as a commonwealth of mutual interests.”

*
The novel won a Somerset Maugham Award, was supported by Jean-Paul Sartre and Richard Wright and is considered one of the important books on colonialization. The novel, much like Boyce’s exhibition, focuses on differing perspectives and narratives. It looks at the many voices contained within a microcosm.
With the collection of artists featured in Boyce’s microcosm there will certainly be a variety of perspectives and narratives; from Harold Offeh’s ‘selfie choreography’ to Alberta Whittle’s sculptures, paintings and videos that “seek to challenge conditions of racialized abjection and find new methods for refusal.”
“I spent the last three years working towards this show,” says Boyce in an artists’ talk at Eastside Projects. She says there was an “initial impulse for play. I work in a very improvised way. I work with other people. At the start I never know what’s going to happen. Things just unfold. I was wanting to get work away from the wall. I was thinking about these three-dimensional sculptures.” 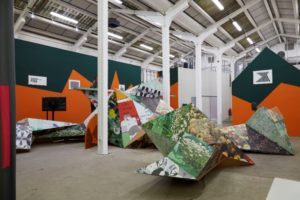 Where did Boyce’s inspiration for these shapes come from? It seems that in part she was encouraged by the creativity of artists from black and Asian backgrounds. From the unsung heroes of the UK art scene who had fallen out of current thinking, Boyce remembers one in particular. “I became aware of Denis Williams. He came to Britain [from Guyana] in about 1946 and a lot of his paintings are in the vortices style…geometric shapes occupy his paintings. I am really interested in abstraction with figuration in some way.” Williams was a writer, artist and archaeologist who taught African and Caribbean art as well as anthropology. He won numerous awards for his art work and was highly accomplished throughout his career. “It happens that Denis Williams did the illustration for George Lemming’s book In the Castle of my Skin. This became a curatorial ring-fence in what this could be.” 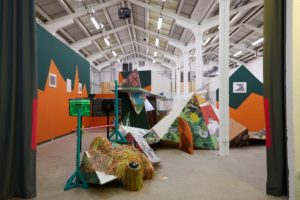 There is indeed a skin-like way that the story of Boyce’s exhibition encapsulates itself. The link to the past via Lamming and Williams is a respectful homage to the experiences of artists, black commentary and history. Boyce’s new interpretation of In the Castle of my Skin revamps how that history is understood by making the art and commentary more physical and contemporary. Boyce wanted to “think about the body in relation to the urban content. We then started to share images of lots of work.” The skin is seen as “an archive that carries the stories of your life. Skin should not be a barrier somehow.”
In the eponymous novel, Lamming explored how skin was a barrier; for him it was his foreign skin, its colour, his blackness that was like a castle that bulwarked him from white society. Boyce’s reimagining inverts this and challenges why skin should be a barrier at all. If the skin does indeed carry the stories of one’s life, then by wearing it bravely on the outside, we invite people to know us better. In doing so Boyce’s exhibition – with its audience participation, physicality and playful improvisation – is an invitation to get under someone else’s skin, and in doing so realise that the internal and external are connected more strongly than we think. Our identities are much more than just skin deep.

Sonia Boyce: In the Castle of my Skin, until 11 April 2020, Eastside Project, Birmingham