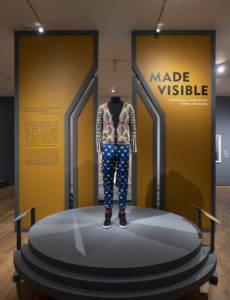 Denis Mwaura on the relation between South African fashion and identity

The Echoes of Apartheid

Perspectives on Fashion and Performance in South Africa

Most recently, student movements such as #RhodesMustFall and #FeesMustFall have shifted the social landscape of South Africa. They have drawn attention to confronting the perseverance of colonial legacies and anti-black racism in the sectors of education, employment, and land repatriation. From the University of Cape Town and Rhodes University, their collective objectives have underscored the shortcomings of post-apartheid. The warping of the education system into a platform for protest has aided them in demanding reformation within cultural and social-political spheres. The visualization of critiques on the reverberating effects of colonialism and the apartheid era are enacted in Made Visible: Contemporary South African Fashion and Identity. Presented at the Museum of Fine Arts, Boston, the exhibition surveyed seven contemporary South African artists working in fashion, photography, video, performance, and sculpture. Their prolific aims in self-fashioning historiographies that were once subject to erasure encapsulate the rich myriad of hybrid identities in contemporary South Africa.

One focus of the exhibition is an engagement with media such as cotton, beads, cowhide, resin, and glass beads to visualize the polarizing effects imposed by various systems of domination. This turn to material culture mediates topics concerning labor, sexuality, gender, memory, and other social aspects that have shaped South African history. Principles of design and ideological preferences produce images of an outer appearance, which then display discrete aesthetic judgments formed by an individual. Within the collective entities of nationality, ethnicity, and culture, fashion assumes the position of determining belonging and desirability in the face of others. It synthesizes the outer appearance with being, that is, a conscious presence able to address their subjective sensibilities. 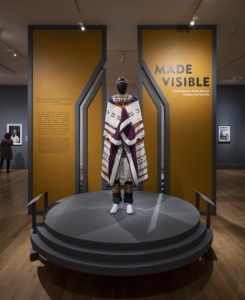 By extension, these concepts are brought forth by an assemblage of an amaNdebele dress displayed on an approximately five-foot mannequin. It is adorned with a colorful glass beaded urara, a ceremonial blanket created in the 1950’s-70s by unknown artists. A dominant color scheme of purple, orange, and blue amplifies the geometric patterns on the white bead background of the blanket. For the amaNdebele women, its ownership indicated the wealth acquired by a woman of age. Sophie Mahlangu, another beadwork artist, contributes two headbands and tricolored leg-bangles. The design elements incorporated in the garments demonstrate the sustenance of traditional practices by the amaNdebele people, which affirms fashions operative mode in conserving cultural heritage. 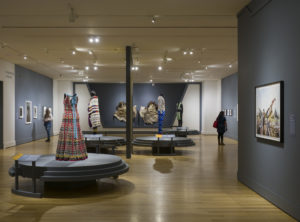 Modern African literature has exposed the devastating effects of exploitation and capital accumulation by Western Europe. African writers have excavated the social and political realities of the colonial era into the realm of historical fiction. Plays such as The Trial of Dedan Kimathi by Ngugi wa Thiong’o and Kinjekitile by Ebrahim N. Hussein, embody a genre of fictive portraits of heroic figures on their quest for sovereignty. The urgency of a work that poses plausibility in African literature provides scenes of a fragmented society. Consider Ngugi wa Thiong’o’s seminal novel from 1967, A Grain of Wheat, explores a crisis of anticipation between the native, the colonizer, and the village. One of the main characters in the novel is, Gikonyo, who is detained at a concentration camp after he confesses to swearing a Mau Mau oath against British occupation. Back in the village, his wife Mumbi awaits his release and upon Gikonyo’s return, he finds her raising a son borne to his village rival, Karanja. This practice of interweaving realities in the colony with fiction is further examined in contemporary South African literature.

Most recently, the South African author, Njabulo Ndebele observes the conditions of waiting in his 2003 novel, The Cry of Winnie Mandela. His inquiry with the subject stems from the Odyssey by Homer, with a focus on Penelope, who awaited her husband, Odysseus, during his ten-year-long war with the Trojans. Despite the suitors that sought Penelope during Odysseus journey, her faithfulness to him is a symbolic device that Ndebele considers in the lives of four female characters. Identified as the Four Descendants of Penelope, each woman’s dreams of reuniting physically and emotionally with their absent husbands torments them in various ways. For instance, Mofolo’s husband leaves for work in the mines only to start a new family and life with another woman, and S’khososana, a domestic-science teacher who anticipates the return of her husband’s after his studies in Britain. Upon his return, he divorces her and marries a nurse. Winnie Mandela, who receives the title of “Mother of the Nation”, mediates these turbulent marriages in fictionalized conversations with the four women. 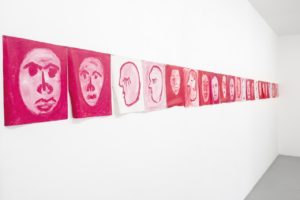 In this vein, Senzeni Marasela, materializes the conditions of waiting in her six-year performance, Ijermani Lam (2013-2019). She manifests an alter ego, Theodorah, a woman in search of her husband, Gebane Mthetyane. Roaming around the streets of Johannesburg, she seeks the same reveries as that of her mother whom she names the alter ego after. The artists’ integration of her subjective history indicates the intergenerational failures of a post-apartheid society. Some of the materials produced from this performance series locate extensions of the Theodorah with Waiting for Gebane (2017). Marasela further reenacts her mother’s labor as a sewer on an embroidered cotton sheet where she characterizes a lone female figure standing between two empty seats. The gestural stitching of her form in red threads against a white muslin clothe is emblematic of the defects interlaced between the past and present generations. 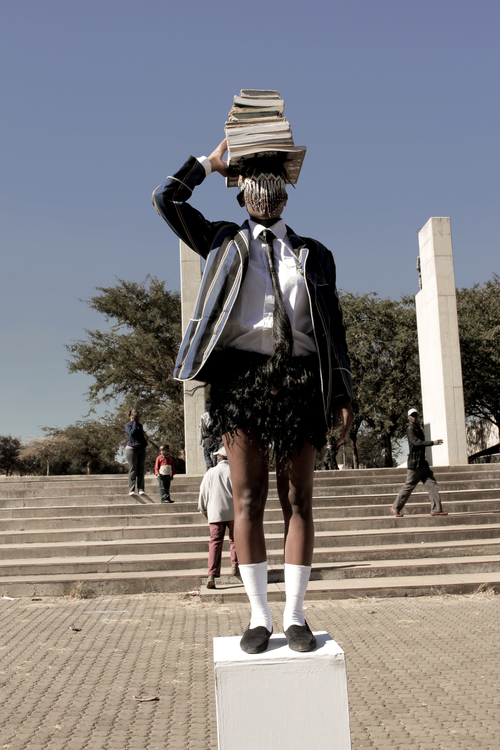 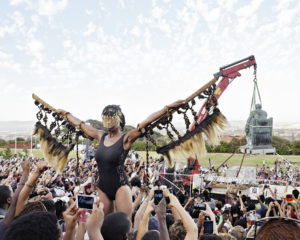 Political resistance against the colonizers’ influence on the dissemination and production of knowledge is investigated in Sethembile Msezane’s, Public Holiday Series. For Untitled (Youth Day), Msezane juxtaposes the remnants of student uprisings with her amaZulu identity in a video work. Dressed in a school uniform fashioned of animal hair as a tie and skirt, Msezane stands erect on a white pedestal holding a pile of books on her head. The duration of the performance is accelerated resulting in a two-minute video with an audio clip of Coming Tomorrow aka Freedom is Coming from the 1992 film Sarafina! Based on the Soweto Uprisings of June 1976, the film narrates the life of Sarafina, a student living in Soweto during a time when Afrikaans was introduced as the language of instruction in schools. Msezane alters the triumphant lyrics of the track into, “Freedom is coming,” pause, whisper, “tomorrow.” In the film, South African students perform the track and Msezane’s modifications with song orient her voice as a precarious fragment warped in a distant promise of liberation. Moreover, the laboriousness of holding a pile of books on her head assesses the production of knowledge and education systems, which were primarily established by colonial missionaries.

Another self-reflexive performance is Untitled (Heritage Day), which is displayed as a photograph of Msezane standing against a heroic sculpture of Louis Botha, the first Prime Minister of South Africa. Against this background, two historical narratives confront each other at the face of the South African Parliament in Cape Town. She wears a ceremonial dress worn by a Zulu woman when she turns the age of twenty-one. Re-producing this aspect of an Umelolo ceremony crystalizes the survival of cultural heritage against the effigies of colonialism. 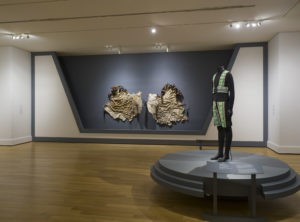 In the face of binary oppositions that limit identity, Nandipha Mntambo recognizes the gap of possibilities that exists between twofold relationships. Nandipha Mntambo’s, Duality, examines these aspects with an installation of a male and female form molded in resin-soaked cowhide. During her undergraduate studies, Mntambo studied forensic pathology which provided an entry point in participating with art objects at the Michaelis School of Fine Art, University of Capetown, where she learned processes of preserving the hide. As I approached the mounted installation, the smell of the brown hide lures the viewer to closely inspect the soft fur that folds and shapes the human body. The assemblage of humanistic and animalistic characteristics activates the sensory effect of the sensual and repulsion. Mntambo’s sculptures speculate on a disorder between the materiality of skin and fur thus reflecting on how visual signifiers of difference form and shape identity.

In a post-colonial society, Frantz Fanon asserts that decolonization is a historical process in a world of total disorder: “Decolonization never goes unnoticed, for it focuses on and fundamentally alters being. [It] transforms the spectator crushed to a non-essential state into a privileged actor, captured in a virtually grandiose fashion by the spotlight of History.” (1). In this transformation, South African youths and artists have assembled a visual language that privileges them into challenging the prevalence of post-colonial violence in their society. Amidst the political background of South Africa, these contemporaries enmesh performance as a critical tool that memorializes their identities in addition to rectifying inadequacies from across generations.

Denis Mwaura is a writer and educator based in the Greater Boston Area. As a contributor to the Boston Art Review, his writings are devoted to analyzing the conceptual practices of artists in Africa and the Black Atlantic as they visualize the manifestations of race and ethnicity.

← Africanah.org at 5: Dread Scott, an activist who does not give up
The Kitchen Table Series of Carrie Mae Weems →