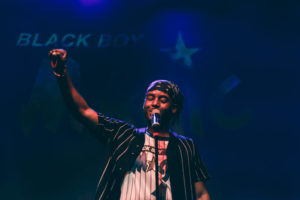 Art gives us the ability to acknowledge each other’s humanity. In the words of MLK (Martin Luther King Jr), Justice is what love looks like in public. I believe that but there is clearly a discrepancy as to who gets justice & who doesn’t. We need more love and art, to me this allows us to access parts of ourselves and reimagine a better tomorrow. I don’t think there can be justice without art. There cannot be art without an interrogation of justice.

Dr. Cornel West hailed him as the Gil Scott Heron of his generation and whilst for many 20-year-olds living up to this standard might feel like undue pressure, Malcolm London is already proving himself a wunderkind. The Chicago native holds not only the title of poet but also lists musician, activist and educator to his merits.
Despite his young age, it is clear that London’s poetry evokes a cultural narrative and his work reflects deep-rooted beliefs of the world whilst tackling social injustice. Featured on TED Talks with John Legend and Bill Gates, London is no stranger to the spotlight and expresses these views within the power of his poetry.

In his late teens he won the Louder Than A Bomb youth poetry festival and from that point has hit the ground running. Besides his TED Talk, London has hosted open mic nights, appeared before the United Nations and held the stage with rappers and famous faces. In 2016 he debuted his album OPIA. The title, he is quoted, means the ambiguous intensity of looking someone in the eyes, which can feel both invasive and vulnerable. This ambiguity, this duality, is a trait present in his poetry and the spotlight cast invites the reader a voyeuristic glimpse into another world that is both uncomfortable and humbling.
To that end, I have taken a closer look at a couple of London’s poetry, adding my own commentary and interpretation, followed by an interview with the Malcolm himself.

Never Too Late is a first-person poem focusing broadly on materialism versus old-fashioned principles. The narrator who we assume is London swings back and forth between his experiences with his grandparents; the lessons they taught him and then relays these to his own students. In this way he uses the past as a guide for contemporary society.
The poem begins There’s one thing the richest man can never purchase / Yesterday. Here the tone sets the idea that money cannot buy memories and (later in the poem) relationships or good character. London reminisces how he sat with his grandfather, reflects on his grandmother’s caring behaviour and his grandparent’s relationship. Nostalgia is imbued in his memories but with that nostalgia comes the acceptance of social injustice. One example is the poverty they lived in I am a poor man living in the same neighbourhood / My grandparents could never afford to leave.
However London transform the struggle into lessons for the future, Telling my students / This city / Is yours / This is your home / With all its late-night / Back alley bathroom visits / Under all this construction / You are builders / Hold your dreams / At the lovers hand / Hand the next person you see / A thermos of coffee / Wake them up / Wake them up / No headline defines you. London references several motifs mentioned in the poem such as the thermos of coffee, construction etc. He changes the meanings of these things, empowering his students with the same attitude his grandparents had. Wake them up repeated twice is an important cure for the disenfranchisement his contemporaries face. It might also play on the idea of being woke a word coined from black activism which means having social and political awareness. By not letting headlines define this generation London brings contemporary racial issues to the forefront. The police brutality, racial profiling and supposed crime in ghettoised areas is propaganda created by “the richest man” who could purchase a news station. Despite the media’s bias, freedom comes from education and this is found from old-fashioned values like kindness, love and compassion; the behaviours displayed by his grandparents and taught via the narrator’s classroom.

Why You Talk Like That? explores the relationship between language and cultural identity. It begins The cabrini green growing in your esophagus / Talk like you / Waiting to be gentrified / Why you talk like that? / Like coffee? / Black but not as strong like they like their coffee / Integrated / Obeying the cream. In the most basic interpretation, London explores the idea that black culture is being diluted and weakened via the cream (white people) and gentrification which in modern terms has become a modern colonialization of typically ethnic spaces. This is supported later in the poem with I hear the colonialism in your dialect. With colonialism London reminds the reader of humanity’s vast history of enslavement, empire and inequality.
The black experience, more specifically, the black American experience has been riddled with injustice, Talk like you immune to Katrina. After Hurricane Katrina the spotlight was on American politics and their treatment of black people affected by the disaster. This followed in the media with a series of police brutality episodes that made international headlines. It is mentioned here On police brutality / Dishes out in cooke county. The poem highlights the divide between black culture and black experience amidst white America and the power of institutionalised racism. This is a heritage London draws out from history and then again at the end with You talk like you never been north / Never been freed, an allusion to the emancipation of black slaves.
His final line ends Like you got something to say and this brings home the big idea of the poem. Language is power and the title Why You Talk Like That? not only represents a ebonic phrasing but in doing so London champions black identity and turns the language into a form of rebellion against the white system. Language being the assertion of one’s personal and historical narrative is crucial to retelling black experiences (the poem itself adds to this) and as a sign that social injustices will be publicly exposed and denounced Like you need to be heard / Like your story has a history.
How did you discover your calling as a poet, activist, educator?

I truly believe this path discovered me. If someone would have asked me seven years ago if I knew what I’d be doing right now I wouldn’t have an answer for you. However, it was my experience in the educational system that inspired my desire to create alternative educational spaces for myself & young people alike. Poetry is what gave me my tongue, activism is what gave me my feet & teaching is what gives me my purpose.

What have been some of the highs and lows of your career so far?

Every time I get an opportunity to stand in front of a classroom or work with young people it gives me all the validation I need. Every moment I get to spend giving back feels like a high for me. Outside of the normal artistic lows of not feeling good enough or needing affirmation that your art is worth something, the lows I experience often become teachable moments. I use every misstep as an opportunity to learn, relearn or unlearn.

Your website says you see art as the intersection between justice and poetic imagination. Can you tell us a bit more about this?

Art gives us the ability to acknowledge each other’s humanity. In the words of MLK (Martin Luther King Jr), Justice is what love looks like in public. I believe that but there is clearly a discrepancy as to who gets justice & who doesn’t. We need more love and art, to me this allows us to access parts of ourselves and reimagine a better tomorrow. I don’t think there can be justice without art. There cannot be art without an interrogation of justice.

In your poem Never Too Late there is a lot of influence from your grandparents and how they treated each other. How influential were they on your outlook and later your work?

They helped raise me. My grandmother is the foundation of my family. She is no academic scholar but is the wisest person I know. My grandfather was a silent man but let his love for his family speak for him. Whether I realize it as much as I should, I know both of their wisdom, their personality and their love is in me.

How closely linked is black identity to your work?

My Black identity is my work. In order for Blackness to be free it has to define itself. I try to shape my identity around what feeds me. Blackness is often created in trauma but what does it look like to reimagine Blackness, to not center trauma but to overcome it?

Who are the artists or other figures you look up to?

What advice would you give young people who are struggling with disenfranchisement?

Join an organization. If the organization you want to be a part of doesn’t exist, create it. We need collective struggles to change the paradigms & create a better tomorrow.

Finally, what are you working on next?

I just released a project called The Right Away Series, which is available on all streaming services. I am currently working on a new project and a book of poetry. Malcolmlondon.com is the place to go for all updates.