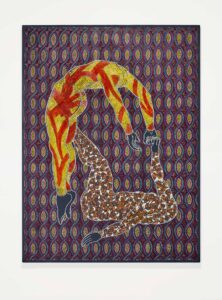 About:
The title, meaning ‘Navel’ in isiZulu, makes reference to the ceremony of Inkaba Yami, where a newborn’s umbilical cord is placed in the centre of a family’s kraal. Led by the elders, this ritual is a reminder for the child to never forget their origin and identity. 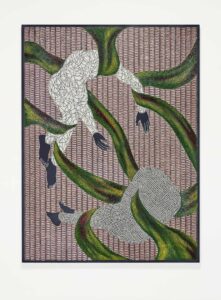 Presented as a series of painted hand-carved wooden panels, Sthenjwa Luthuli powerfully binds spiritual and physical worlds by inscribing the surface with the value of a tangible ritual.
Through his language of pattern-making, Luthuli depicts what he refers to as the ‘unknown space’; a space that represents a threshold or infinite expanse where ancestors and living descendants coalesce. The harmonious state depicted by the artist exists between tension and balance, the past and present, traditionalism and modernity. 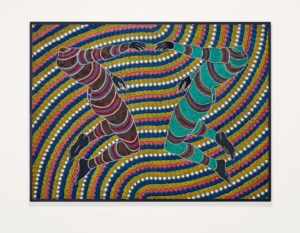 Through this push-pull action, Luthuli inadvertently highlights the potential for a communal disconnect from traditional customs caused by urbanisation, globalisation and migration.
The inherent duality in Luthuli’s work is further emphasised by the juxtaposition of abstraction and figuration, and their collision in these vibrating visual fields.
Materially, Luthuli’s works share an affinity with the rich artistic history of his region; specifically the legacy of the Rorke’s Drift school and linocut, woodcut, and etching artists such as John Muafangejo, Dan Rakgoathe, Sam Nhlengethwa and Cyprian Shilakoe. Luthuli’s works, however, still read as undeniably contemporary with influences ranging from Wangechi Mutu to Yinka Shonibare. The electric draw of his painted reliefs rest in the joy and freedom they exude. They represent Luthuli’s placement of himself within a collective history and consciousness: A sense of belonging amidst an ever-changing contemporary landscape. 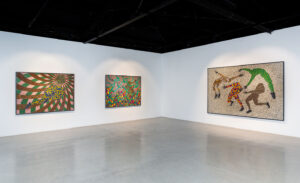 Artist Biography
Born in Bothas Hill, KwaZulu-Natal, Sthenjwa Luthuli (b. 1991) is a South African artist working primarily in carved wooden reliefs and woodcut prints.
In 2012, Luthuli was nominated to participate in the Velobala mentorship program hosted by the African art Centre at the Durban University of Technology. Significant projects include a mural in the Concordia Tunnel in Bremen, Germany. In 2017 he was placed runner up in the Sasol New Signature Awards Competition. 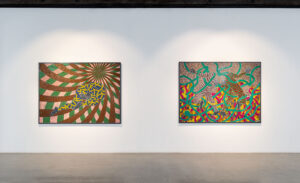 His work forms part of private and public collections, such the Leiterin der stadtischen Galerie in Bremen, Germany and the National Art Bank at Oliewenhuis Museum in Bloemfontein, South Africa.
His work has been exhibited widely at national Art Fairs such as Investec Cape town Art Fair, FNB Art Joburg, and Latitudes and Turbine Art Fair in Johannesburg, South Africa.
Most recently his work was included on the group show, The Medium is the Message, Unit gallery London in 2020