The Angolan Pavilion at the Venice Biennial 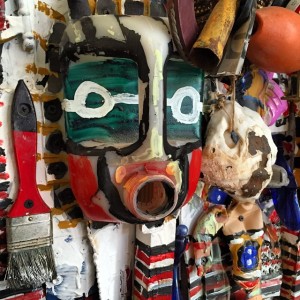 Approaching the Pavilion itself feels like a form of travel through time and space: the exhibition is mounted on the second floor of the Palazzo Pisani Moretta, a Baroque Venetian palace on the Grand Canal that now houses the Conservatorio Benedetto Marcello. In order to reach the installations, one traverses a richly decorated entrance hall to the sound of music students convening and rehearsing.

Allison K. Young on the Angolan Pavilion at the Venice Biennale

On Ways of Travelling: Urbanism and Renewal in the Angolan Pavilion at the 56th Venice Biennale

The Angolan Pavilion for the 56th Biennale di Venezia is titled “On Ways of Travelling,” yet the exhibition more accurately invokes some of the barriers to the freedom of movement that are experienced by many in Angola, and elsewhere in Africa – visas, economic hardship, borders and road traffic. Yet “travel,” in this context, is not only meant to signify physical movement; it also refers to the meeting of disparate worldviews, lifestyles and temporalities, as well as to states of dreaming, desire and longing for change. The subject is nowhere more relevant than the present context in La Biennale di Venezia, an essential destination for international art tourism and an early precedent for the phenomenon of the ‘global exhibition’ of contemporary art. 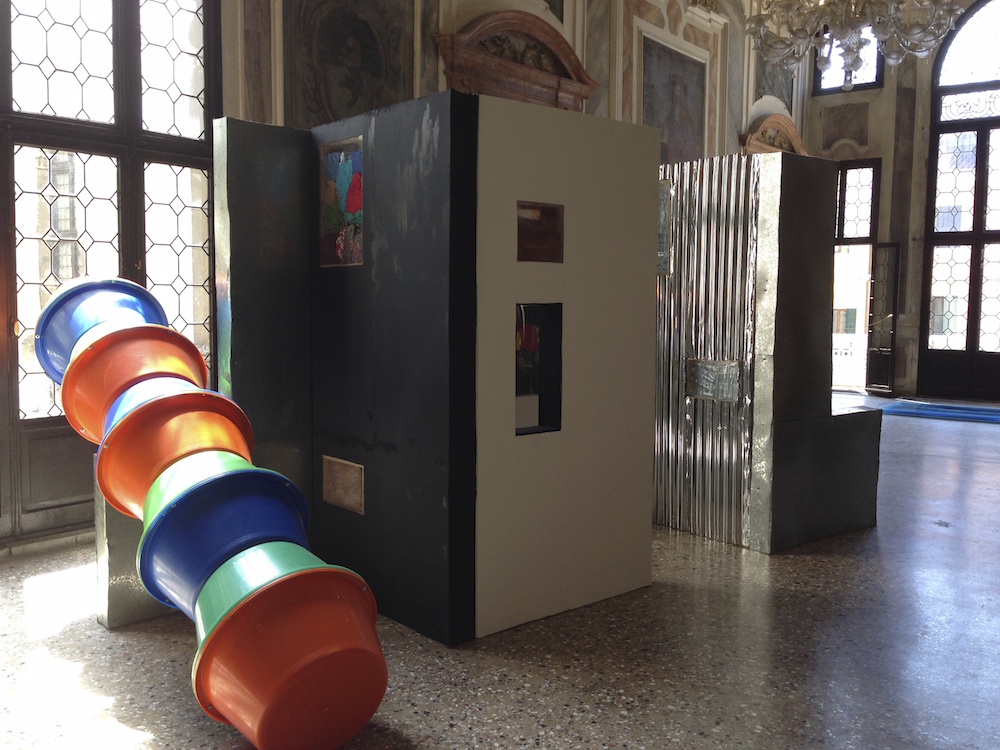 Approaching the Pavilion itself feels like a form of travel through time and space: the exhibition is mounted on the second floor of the Palazzo Pisani Moretta, a Baroque Venetian palace on the Grand Canal that now houses the Conservatorio Benedetto Marcello. In order to reach the installations, one traverses a richly decorated entrance hall to the sound of music students convening and rehearsing. Ascending the staircase to the second floor, a tower of brightly colored plastic bins appears into view, revealing a sculpture by artist and curator António Ole. Vernacular materials, bold colors and found objects fill the Palazzo’s ornate interior, creating a rich and uncomfortable juxtaposition between European opulence and African urbanism. Herein lays one of the central threads that run through the exhibition, which envisages the constructed environment as a living network of meeting points, barriers, interstices and memories. In his own artistic practice, Ole has investigated Luanda’s recent modernization, the effects of high-end development on the city’s poorest areas, and the ways in which people always manage to pass through even the strictest of borders. Works from his acclaimed Township Wall series, which he began in the mid-1990s, invoke the permeability of border architecture and the coexistence of luxury and squalor in cities like Luanda (one has only to consult the first line of the BBC’s profile of the nation, which explains that while it is “one of Africa’s major oil producers, Angola is nonetheless one of the world’s poorest countries”). In addition to the Pavilion’s emphasis on architecture, many works share a Janus-like treatment of oppositions such as past and future, decline and progress, or memory and fantasy.

For this exhibition, Ole presents a sculptural installation that comprises a folded wall of corrugated iron; cut-out niches in the metal sheets are filled with glass bottles or scrunched piles of donated clothing – objects that have moved into Angola’s economy from elsewhere. Situated around this divide are two assemblages of plastic tubs, examples of the cheap and low-quality materials, often imported from China, that are now ubiquitous throughout Angola. Humble yet virtuosic, the installation testifies, as well, to the optimism, creativity and perseverance of Angolan culture even in spite of ongoing hardship. 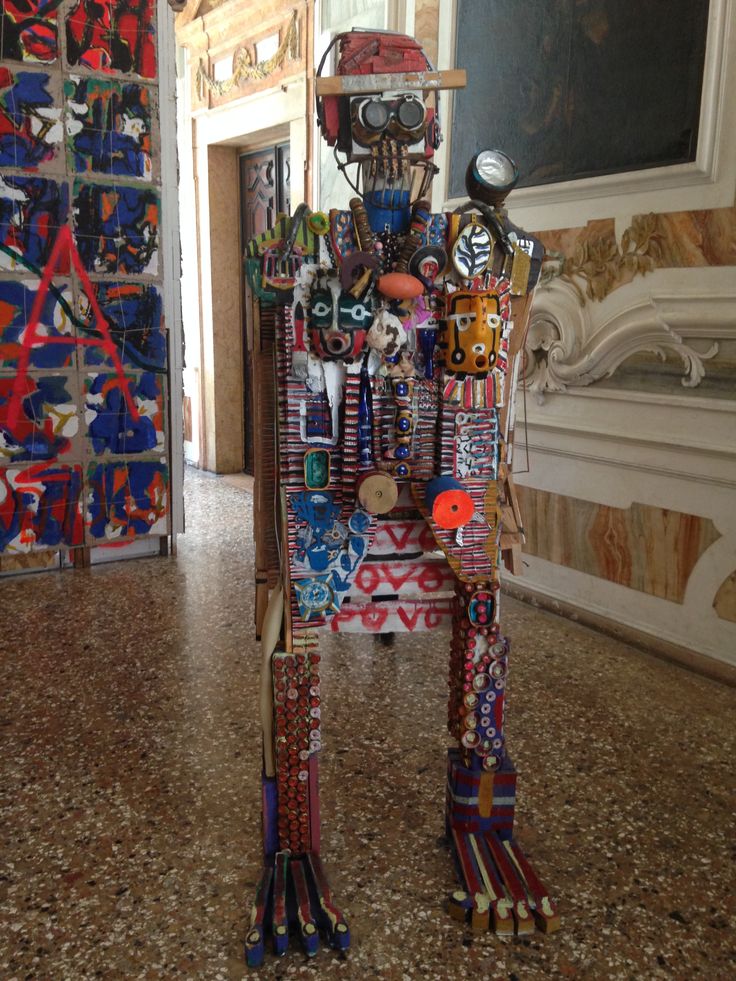 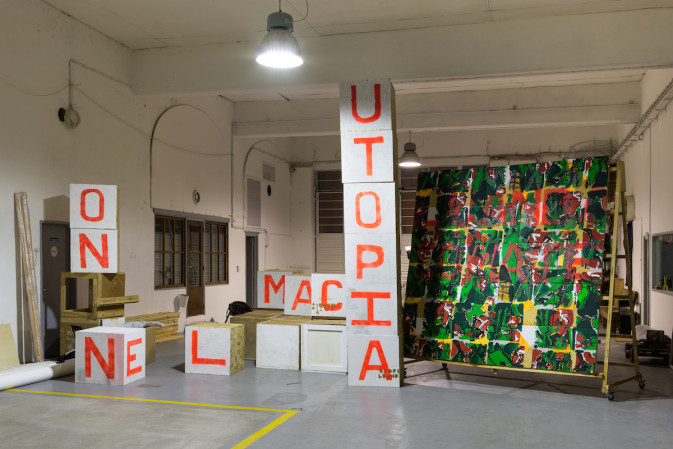 Nelo Teixeira and Francisco Vidal also make use of vernacular materials in order to highlight the simultaneous legacies of traditional, modern and post-colonial histories within contemporary Angolan society. Nelo Teixiera belongs to a long lineage of mask-makers, and his installation comprises a community of standing figural sculptures arranged in a circle facing inwards. Adapting the forms of ‘ritual’ objects, Teixiera’s work blurs the distinction between artifacts and art objects. The sculptures are fashioned from recycled and discarded materials found on the streets of Luanda, also raising questions about artistic and economic value. In Vidal’s monumental floor-to-ceiling installation, shipping boxes are stacked and decorated with found objects, printed media, and painted phrases, resembling the graffiti-covered walls of urban spaces. Words like ‘Renaissance,’ ‘Transcultural,’ ‘Style’ and ‘Afrofuturism’ imply the mingling of past, present and future states that often describe global diasporan cultures. Ideas and materials are re-used and re-contextualized, constantly in transit. Machetes are affixed to Vidal’s wall of boxes, as reminders of Angola’s twenty-seven-year civil war and the global trafficking of arms; yet, the boxes were also used to transport the exhibition to Venice, perhaps attesting to the positive circulation of ideas that art can enable.

In Binelde Hyrcan’s video, Cambeck, allusions to travel are met with the reality of immobility; the piece records four young boys as they imagine alternate lives of affluence and escape. Seated in small holes dug out in beach sand that are positioned to resemble car seats, the boys face out towards the Atlantic Ocean and direct the “taxi driver” at front, who wields a flip-flop as steering wheel. “Driver, go faster!” one commands, “Come on driver put on that song!” “Can’t you see the radio is broken?” They speak of family members and loved ones in the United States and Italy and condemn the slums back home. While their dialogue hints at the dream of global travel – crafted through observation of adult conversations – it also makes reference to the road traffic that famously plagues Luanda, with commuters often spending up to four hours moving across the city. 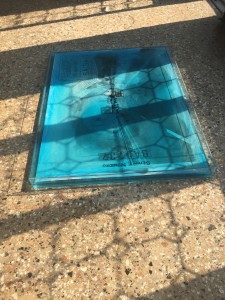 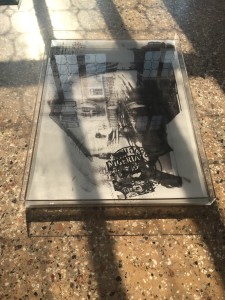 Délio Jasse’s installation Ausência Permanente has previously been exhibited in white-cube spaces, but it acquires new possibilities for signification in its display within the light-drenched Palazzo. Three shallow basins filled with colored water are arranged in the space beneath the Sala dei Vescovi’s exterior wall, which is lined to the ceiling with windows. Patches of bright sunlight stream into the room and across its elegantly tiled floor, casting both hard-edged shadows and glowing spotlights over the pools of turquoise, fuscia and clear-watered baths in which large images are submerged: these are photomontages that contain portraits of anonymous men and women overlaid with visa stamps, signatures, notations, dates and architectural details. Allusions to movement and the institutionalization of travel reside both in the symbols of bureaucracy scattered across the images and in the tentative, searching eyes of each subject gazing towards us, presumably photographed at the time of visa or passport applications.

Importantly, Jasse’s mode of presentation makes unmistakable reference to the process of developing photographs, which, once exposed, are delicately submerged in fluid chemical baths before the image is slowly revealed. Jasse has stated that “the stars of this series are ghosts,” and, as such, the present context brings their forgotten stories into light, through a poetics of exposure and visibility. 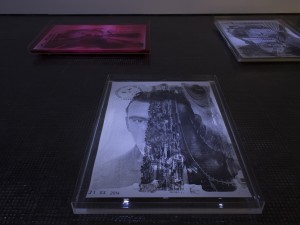 The water that moves softly over Jasse’s images will also remind viewers of a history of maritime travel that has defined modern history in Angola, from the 15th century Portuguese explorations of the New World to the trans-Atlantic trade networks between Europe, Africa and the Americas that carried slave ships between Luanda and Brazil, as well as the tragic present-day journeys of migrants and refugees from the African continent across the Mediterranean towards Italy.

This brings us back to the context of La Biennale, and to the privilege of touristic travel to a nation that currently represents the dream of asylum for so many across the African continent. While “On Ways of Travelling” contains rich statements on life in contemporary Angola, it seems that meaning also lies in the dialogue staged between the Palazzo itself and the materials and ideas presented in the exhibition and to the undeniable entanglements of histories, economies and cultures across the globe.