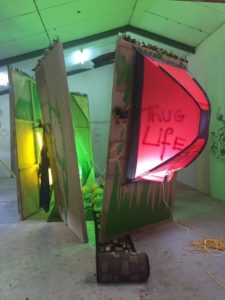 The twenty-some works sit scattered around the large exhibition hall and the first impression is nothing less than overwhelming.

About the exhibition Tirzo Martha: No Excuses!

Visitors who travelled to Museum Beelden aan Zee in late October expecting to see the Tirzo Martha show, were in for a disappointment. The opening of the exhibition had been postponed. Despite the show’s title, No Excuses!, the delay was justified. An unprecedented series of hurricanes had slowed down the containership carrying Martha’s art works from Curacao to the Netherlands, sidetracking it to a Jamaican port.
Normally Martha wouldn’t be bothered by such meteorological obstacles. The Caribbean native has made a name for himself as a flexible in situ-artist, flying around the world, scavenging local hardware stores and thrift shops for materials to construct his large-scale and complex assemblages brimming with imagery. But the artist presently showing at Museum Beelden aan Zee is the new Tirzo Martha. For two years he has retreated into his studio in order to reflect, reject and reinvent himself. This resulted in a prolonged burst of creative energy producing a plethora of new works. He classifies them as ‘paintings’ and it’s typical for Martha’s playfully wayward attitude that he’s now showing them in a museum dedicated to sculpture.
Truth be told, Martha’s latest output looks nothing like your traditional painting. The twenty-some works sit scattered around the large exhibition hall and the first impression is nothing less than overwhelming. Sure enough, canvasses are the main element in most pieces but they don’t hang on nails and don’t serve as exclusive carriers for paint. They have been pierced and punctured, titled and tackled to the floor. Some pigment has been applied here and there, but these blotches mostly serve as a backdrop for an attention grabbing array of objects, ranging from afro combs to oil drums and from corrugated roof panels to Mickey Mouse-figurines. Seldom has the term ‘mixed media’ been applied in a more understated way. Martha’s paintings are like 3D collages, ingredients of which can be unpacked like chapters of a rich and meandering story. 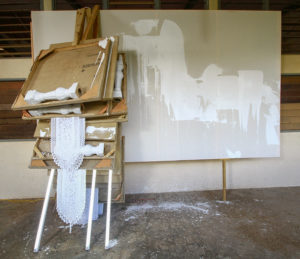 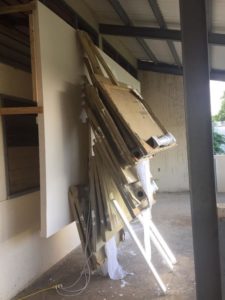 The Consequence of Giving me Carte Blanche at Plein Air  (2016).

Martha’s unorthodox stance vis a vis painting is aptly illustrated by The Consequence of Giving me Carte Blanche at Plein Air (2016). It’s an ironic jab at old-fashioned landscape painting, a practice still very popular on Curacao, which attracts droves of foreign would-be Van Goghs trying to capture the island’s views. Martha doesn’t think very highly of the tradition, judging from the cheesy tablecloths he’s included in the piece and the pseudo-classical pillars which are his archaic answer to Bob Ross’s painting-by-numbers landscapes. Martha’s canvas is covered by little more than a white mist, an abstraction of light. But stacked in front of it are several smaller pictures, propped up by a tripod consisting of tube-lights. These harsh lights form the basis of the composition but are the opposite of natural radiance celebrated in landscape painting. On the other hand: these tube-lights can be found in almost every building, shop or shed on the island, coldly illuminating the unromantic everyday life. 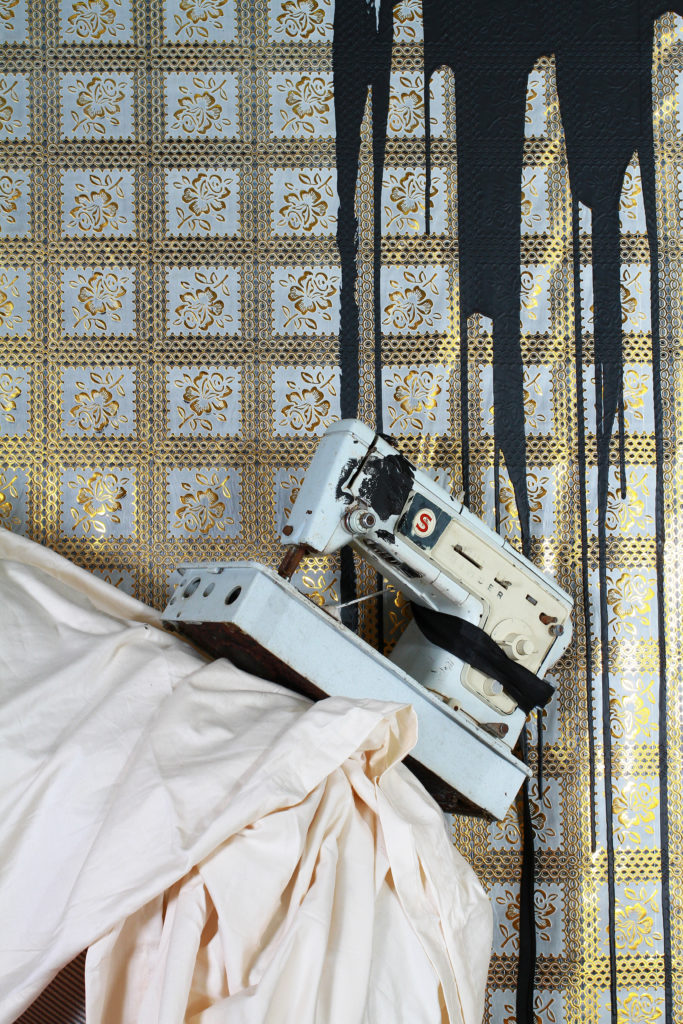 Martha doesn’t hesitate to take on art history and highlight its poor fit for the non-western context. In a way The Venus of Kawa Korsou (2016) is an homage to Titian’s famous Venus of Urbino (1538) but the original voluptuous female nude has been replaced by a rolled up mattress, adorned with Rapunzul-like braids and topped by a sewing machine. Here, the muse has been reduced to domestic drudge and concubine. Again, the gap between esthetic ideal and harsh reality looms large.
The Venus of Kawa Korsou is seemingly held in place by a rope stretching from the mattress to a pillow on the floor. Martha often employs this kind of construction in his work, using tie-rips, rope, nails and tape, openly showing the logistics of his compositions. It lends them an air of DIY-improvisation and makeshift solutions that is pervasive on Curacao. It wouldn’t be stretching it to say that Martha’s work more or less mirrors his native island’s society, which in turn functions as a micro-cosmos representing the world at large. Martha manifests himself as a stern and critical observer, urging his fellow-islanders to look into the mirror, stop whining and start taking responsibility for their own fate. No Excuses! 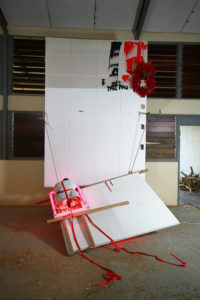 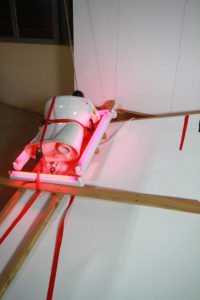 In that vein Martha makes short shrift with the idea of African identity widely nourished throughout the Caribbean. A title like The Fall of the Afro Myth (2016) is telling. The work itself is even more direct, with a black bust of African origin floating in a toilet bowl. With Ai Wei Wei, Sate Batata Hopi Saus (2016) – the title combines China’s best known contemporary artist and a local Caribbean dish based on an Asian original – Martha stresses the composite nature of the Caribbean identity. And with Kiko Ta Nos Identidat (2016) he criticizes those who use identity to manipulate others. The work consists of numerous layers and statues, presenting as many faces, but the piece of black plastic hanging over the work like a shroud implies secretiveness and insincere intentions. 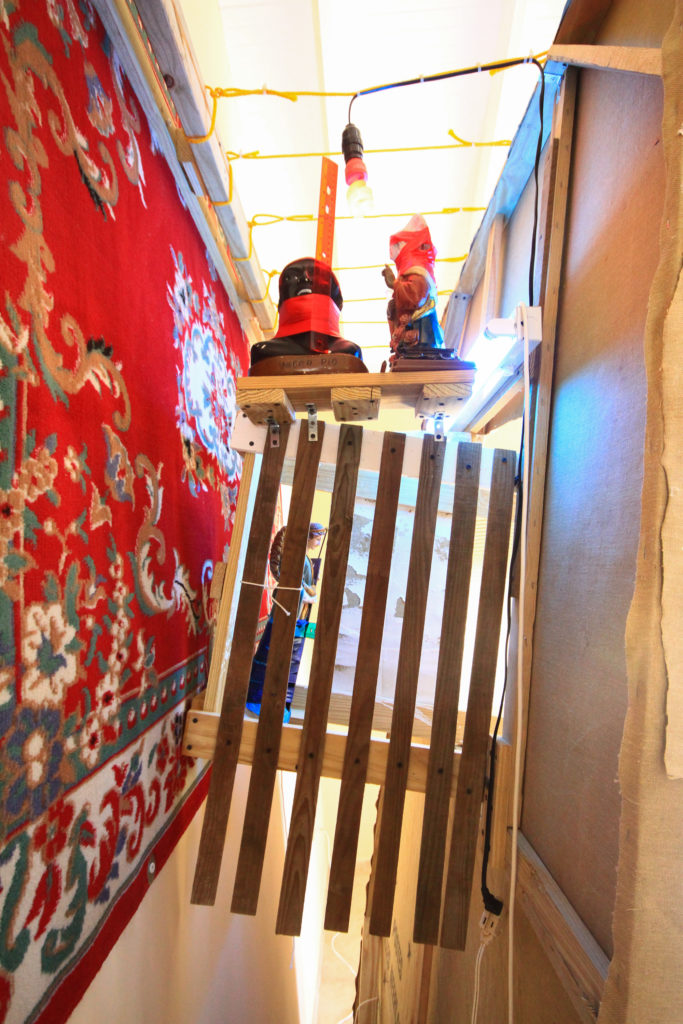 Religion is an important part of Caribbean life so, naturally, it’s a theme in Martha’s oeuvre. In Reinvention of the Afro-Era (Ananzi Colonialism) (2014) we’re granted a view of an idol through a hole in the canvas. In front of it are a few bottles of rum, referring to voodoo practices but also implying that ‘being touched by the spirit’ often involves spirits. Religion often isn’t as lofty as it is made out to be, Martha argues. He drives home his point with God is My Pilot (2014), in which Jesus serves as a guide to a shopping cart on a raft made out of Styrofoam food containers. 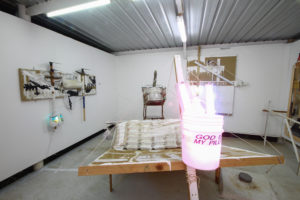 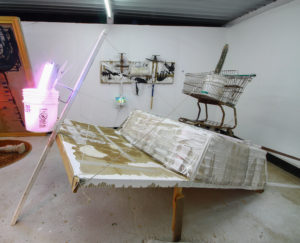 Materialism is a recurring theme in almost all the works on show in Scheveningen, identifying it as Martha’s biggest concern. The shopping cart is a beloved trope, as are rugs and colored lights. Louis Vuitton Gang (2014) reads like a veritable inventory of status symbols, ranging from gilded picture frames to construction materials. 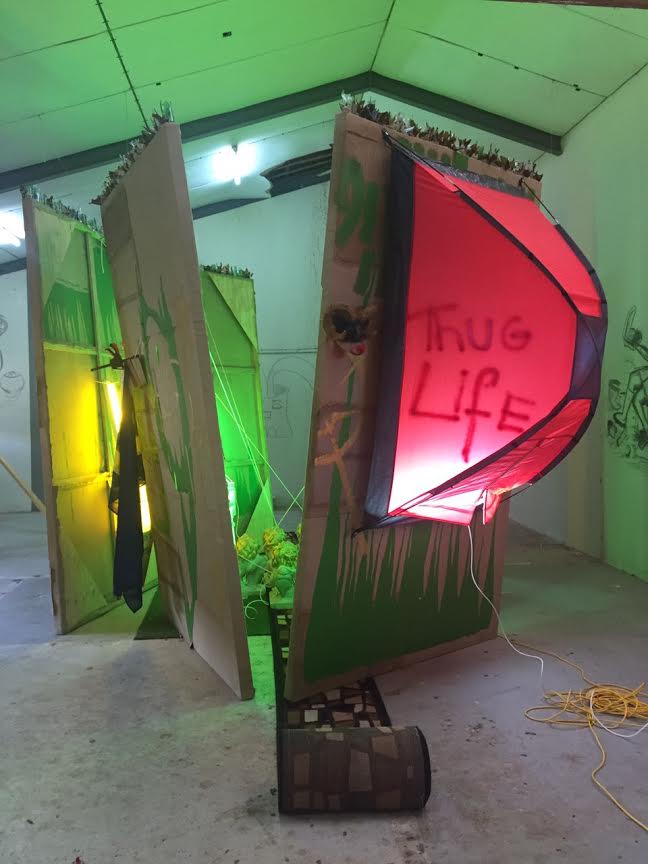 Tirzo Martha is a joker, a preacher and a social commentator all rolled into one. As one of the driving forces behind Instituto Buena Bista in one of the lesser parts of Curacao, he’s also an active agent of social change, teaching youngsters creative skills and giving voice to the underprivileged. This being a small island where gossip and jealousy are rife, Martha’s efforts aren’t always fully appreciated. And he knows it. But instead of acting insulted he responds with humorous self-depreciation. This is reflected by Chapel for Tirzo Martha (2016), standing in the middle of the exhibition hall, at the heart of the presentation. This autobiographical funerary monument has sagging walls spray-painted with nicknames Martha has been called by islanders. On the side hangs a tent, symbolizing the low status artists are awarded on Curacao, nothing short of being a homeless bum. The entire construction is held together by ropes tied to a group of lions on the inside of the shrine. They serve as anchors. And they guard what’s inside, the thing Martha truly holds dear: a place to contemplate the outside world and art’s role in it. 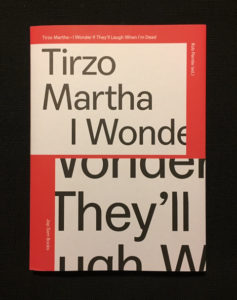