The work of two British born artists – Michael McMillian’s Inna Joburg situated above, and Christine Checinska’ The Arrivants below – shown at the University of Johannesburg’s gallery FADA reconstruct quotidian moments that tend to vegetate into the margins of history.

Athi Mongezeleli Joja on two remarkable exhibitions at the University of Joburg.

The black body as the total embodiment of the hold.

The Inner in Joburg & The Arrivants

Remembering is never an innocent or neutral exercise. Like its foe, forgetting, it is selective and even idiosyncratic. In post-1994 South Africa the passionate turn to memory, more so to the rare moments omitted in popular accounts have become prime reference today. This return of the “ordinary” or “normal” in popular imaginary, like its adversary, also undialectically constructs a “truth” via a mode of erasure. It enforces itself as the new spectacle in ways that alert us of the incestuous bonds between remembering and forgetting.

The work of two British born artists Michael McMillian’s Inna Joburg situated above, and Christine Checinska’ The Arrivants below, shown at the University of Johannesburg’s gallery FADA reconstruct quotidian moments that tend to vegetate into the margins of history. Both installations, using so-called non-traditional everyday material to recreate “old” worlds, both familiarity and peculiar, allow us to re-imagine the existential dynamics of Afro-Caribbean refugees in modern Britain. Previously, individually shown in numerous venues, now appearing as a nomadic duo, in its monumental installment, conjures the image of the ocean as a transmission line. The nautical activities of the modern world that begin with capturing of bodies and stealing of the riches. But also there are itinerant flows of cultures, things, habits and values making the sea a place of complex activity.

Meticulous and spic and span, McMillian’s cubicle reconstructs, which is to also say re-interprets, his folk’s living room, mined with “kitsch” 1970s black working class décor. It is spatially constricted but warm and inviting, strewn with props and items reflective of a shared sensibility that has turned into a convention amongst working communities. This in itself already evokes the triad of race-class-culture character that rears in the work. Judging by its title, McMillian intimates not just the work’s own itinerancy as a travelling piece, but also the prevalence of a certain sensibility enforced by a “common” reality. But it is this unambiguous reality crowded out or turned into an elusive footnote that is missing here.

But what does it mean to be confronted by this image, this proletarian chic safely reproduced away and without the strain of its existence? How do we make sense of the ravenous appetite that stalks such artistic installments, and the easy satisfaction at which the other nibbles in the bizarre? Frozen in time and place, more often than not, these kinds of excavations, well meaning as they are, unavoidably cannot shake off their quixotic and exotic curiosity they foment. Such that, though they beckon us to look at the familiar differently, largely to make sense of elided strategies of survival, they veer towards re-codifying abnormality as an aesthetic. In such instances defiance gives in to capitulation. The bare openness of this three-wall stall invokes not just welcoming, but also the irony in the idea of the black immigrant’s “home.” Is this bareness, or even absence of human life, except those who enter as audience, alluding to the historical vulnerability of black immigrants “homes”, where discretion and sanctuary are revoked? 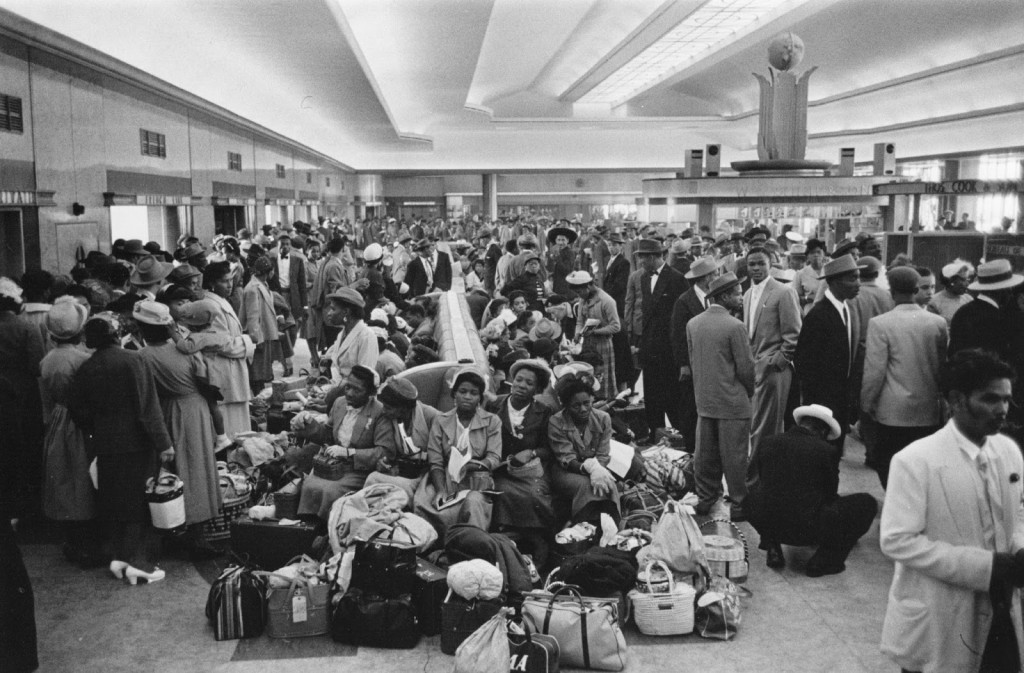 However in Checinska’s re-interpretation of a London departure point, located directly beneath the Mcmillian’s cubicle, a different but also interesting dynamic is introduced. The descent into lower parts of the exhibit invoke symbolically, descending into a ship’s hold. This refers to the hold of the ship where stolen African bodies were piled onto each other like sardines in the base for months and sold in the west as slaves. The hold has the old motif in narratives that often treat slavery as an event but not as a symbolic representation of the plantation structure of anti-blackness in the so-called aftermath. Checinska’s project introduces the 1948 summer landing of the 700 Jamaicans in the U.K. docks, the so called Windrush generation, invited by the British government to assist building their war torn “Mother Country.” The Arrivants, a title adopted from Barbadian poet Edward Brathwaite’s book with a similar title, refashions the moment, turning its focus to the sartorial as a means of negotiating the border, in its literal and figurative sense.

In this nocturnal abyss we stumble into the labyrinth of texts, objects, cases, voices, suspended suits etc. – a bricolage of daily material whose darkly obscurity produces an ultra-reality. That is, a life lived in the underside of modernity. Though pointing our attention to the seriousness of dress, we cannot resist drawing the unavoidable parallels that induce the ecological madness of the hold. The story of the Windrush generation – from the motif of the ship, the motive of the British government and the subsequent events – stitches together the seemingly disparate and discontinuous patches whose origin is the hold. 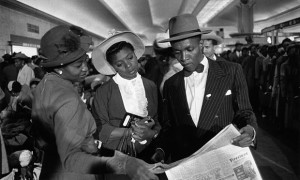 Whether intentional or not, the hold becomes a signifying primal site that restages the global “fact” of blackness even in those instances it seems never to materialize. If memory implies a distance between past and present, how do we commemorate the hold? It can be a gross misreading to just see Inna Joburg and The Arrivants as pointing us to experiences of a fixed time and place, foreign if you like. That is, as works of art these pieces struggle with the predictability of the abnormal in ways that are never simply reducible to a single place or site but to the singularity of the black body as the total embodiment of the hold.