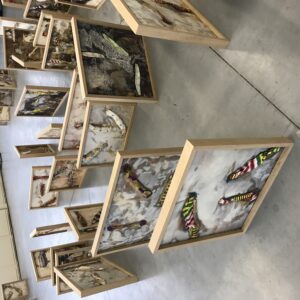 The works articulate possibilities for moving beyond the modern/colonial order, offering us an opportunity to think beyond our own binary brains and consider the healing nuances of the in-between.

Fifty double-sided works. Together they make up one of three series of artworks resulting from Victor Sonna’s lengthy journey of research and discovery into colonialism and the transatlantic slave trade. When I first encountered Bleach and Scars (2018) at Sonna’s studio, I was struck by their unusual visual language and rich metaphors, and felt an immediate sense of connection and resonance. As I learnt more, I began to understand that these artworks express an intriguing sense of in-betweenness that spoke directly of and to my own identity, as someone of mixed racial heritage, but also provoked a lot of reflection on the possibilities of collectively and individually healing from coloniality. Writing this text was my way of exploring this personal connection. In it, I unpack the materiality, composition, and process beyond these works, and offer an interpretation that situates them within the realm of the decolonial.

Each work is a combination of two contrasting textiles framed in wood Sonna found in Suriname. They are all alike yet subtly different. Sonna often works with a technique of assemblage — a bringing together of found and unrelated objects — and this series is no exception. The canvases are gobelin tapestries dating from the seventeenth century. They depict historical European scenes into which traditional African kente cloths made by local people in Ghana have been inserted. The European scenes are partially hidden from view; occasionally visible, but mostly lurking beneath a layer of white epoxy ‘bleach’ applied onto the textile surface. The ‘bleach’ effect makes me think of the white-washing of the past, the covering of tracks, the erasure of violent histories. It also brings to mind fictional ideas of purity that are so central to colonial ideology. The myth of pure races and cultures. 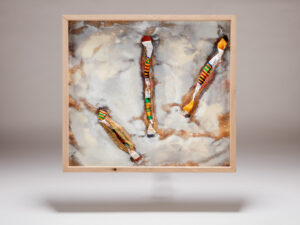 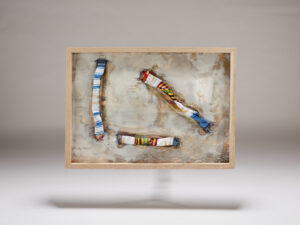 Speaking of purity, a clearly defined culture lays claim to each textile. They are unambiguous and stereotypical material products of two historically antagonistic geographies: Europe and Africa. They represent two sides of the colonial encounter, but they also happen to be Sonna’s two home contexts. The juxtaposition between the goblins and the kente cloths creates a tension in the frame which perhaps reflects the tension he feels in his own life, having to negotiate between Cameroon, where he was born and raised, and the Netherlands, where he has lived for many years. Stuart Hall argues that diasporic migrants inhabit a space that brings to mind the African American author W.E.B. Du Bois’s idea of ‘double consciousness’: “a state of belonging to more than one world […] but never wholly in both places.” All of Sonna’s work is an expression of his diasporic identity, his own ‘being’ and ‘becoming,’ but his lived experience of in-betweenness feels especially alive in Bleach and Scars to me.

The Congolese philosopher V.Y. Mudimbe makes the point that “the colonizing structure has resulted in a dichotomizing system with a great number of paradigmatic oppositions.” Binary oppositions such as Africa and Europe, black and white, colony and metropolis, cultured and primitive, self and other, run deep throughout colonial narratives and continue to live within us. In the use of traditional European and African textiles, Sonna visually recognizes and represents exactly this: the colonial “dichotomizing system” that has caused so much harm. The artworks explicitly acknowledge the binaries, classification, and categorization that is the basis of colonialism and the slave trade. The violence inherent to these binaries is all the more discernible when the process is brought into consideration. The African textiles abruptly interrupt and rupture the idealized European scenes. The gobelin’s are cut open and the Kente cloths sewn in gash-like strips, forming raised structures protruding from the flat surface. The cutting might symbolize violence, and the raised bumps are a metaphor for the scars we feel today, in the wake of colonialism.

The artworks vividly (re-)remember a traumatic past and reflect on the present in connection with the past. This kind of acknowledgement is important in its own right. Acknowledging the colonial wound is itself an important part of working through the past. But what I find particularly special is that while recognizing the strategies, violence, and scars of colonialism, the works simultaneously manage to transcend it all. Breaking through the omnipresent colonial wound we are offered glimmers of healing in the magic of the in-between. It is this duality that led me to connect the works with decoloniality, which is described by Rolando Vazquez as “at once the unveiling of the wound and the possibility of healing.” 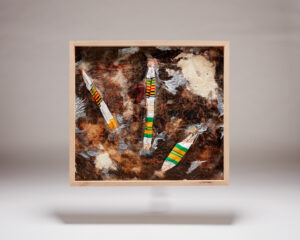 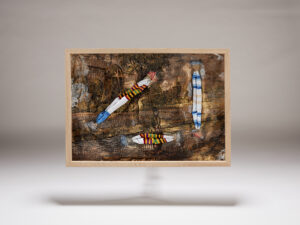 Sonna acknowledges the paradigmatic oppositions. They are alive and tangible, held in co-existence and contradiction within the works. But they are then blurred into a third thing. Historically violent and antagonistic differences are sewn, transformed, and bridged together in the frame to create something with new unique meaning. A combination of separate elements are brought together in a unique fusion.

Putting Europeanness (gobelins) and Africanness (Kente cloths) into real physical contact in the frame, meticulously sewing these oppositional textiles together, is in my mind symbolic of a healing unification of the colonial divide. Difference is bridged and translated into a new intercultural aesthetics – not categorizable as European or African art, but something in-between. This symbolic unification might also be read as a reconciliation of the two worlds that live within him, revealing in-betweenness and hybridity not to be a condition of fragmentation (as colonial narratives would have us believe) but wholeness. The works articulate possibilities for moving beyond the modern/colonial order, offering us an opportunity to think beyond our own binary brains and consider the healing nuances of the in-between.

Hannah Vollam is a writer living and working in Amsterdam