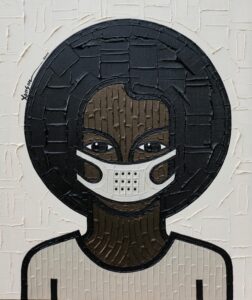 The work on show is clearly the artist’s response to the covid-19 pandemic. The artist is among the few that have veered away from their usual themes in their works to tackle an immediate issue. He relays in the catalogue under the exhibition brief that when he was going through his sketch book at the beginning of the pandemic, he found sketches of figures wearing masks which he couldn’t remember where the inspiration came from.

Matt Kayem on the work of Xenson

Posters had been flying around on social media and the much-anticipated date was 6th November when Xenson (Samson Ssenkaaba) was to open his solo show at his space, Xenson art space in Kamwokya, Kampala. The anticipation and excitement building up to Xenson’s show is not new as it’s always the fever for an artist who’s mastered the field of branding. The title of the show alone, Lumiimamawugwe, which is a Luganda word that has become synonymous with covid-19 would loosely be translated to lung constrictor or something that blocks the lungs, prevents them from working. The title is very arresting, grabs your attention. And then the poster which would pass for an artwork itself, a mask out of rubber on top of bark-cloth, mimicking and cleverly summarizing the work on show.

Building up to the show, the artist, Xenson released a lyrics video for the song Bugulumu on his Facebook, Instagram and YouTube channels. The song is laced with a message of hope for these trying times. Bugulumu meaning humps, which he raps that are always ahead and we will bump into but have to rise up after. Perhaps what can get one’s brain cells vibrating from the song and one of its strengths is the employment of ancient Luganda proverbs. Most of the deep bombastic Luganda words in the song are not known to contemporary speakers of the language, surprisingly, maybe not. It’s always been Xenson’s crusade to probe colonialism and decolonization, to try and revive our lost indigenous ways through his various avenues of expression. The song’s instrumentals are also one to talk about, sounding well put together. It is a blend of choral sensibility of African folk music and the griot tradition crowned with a distinct irresistible akogo (thumb piano) and a mellow orchestral bridge. Such creations are what have propagated a cult following and the eventual enthusiasm leading to his shows. 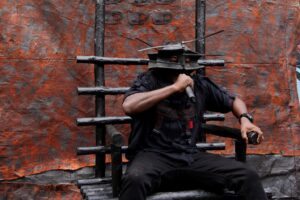 Xenson performs during the opening of his show.

As is the norm with a Xenson show, Lumiimamawugwe began with the artist’s performance. Over his fifteen-plus year career, Xenson has been performing pieces that bridge the gap between theatre, performance art and poetry. And this was no exception as he bulged up from behind the building, donning his signature rubber mask, black robe and black pants. With a good degree of emotional intensity, he recites his popular Kintu poem which hints on the possibility of our forefather Kintu, a pre-colonial pioneer Buganda king coming back to life and seeing the state in which his predecessors are in, a worrying state in which we have forgotten who we are. He recites the lines with a powerful but sad voice, almost sobbing which leaves the young crowd both amazed and startled but it’s probably what they need – something that shakes them off their seats. 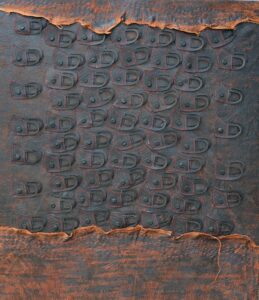 We are lead to the gallery space where his works are hang. Downstairs is where there is four of my favorite works in the show which are also the most recent in the collection. The multi-media works are crafted using acrylics, rubber and bark-cloth. In Remnants 2, rubber masks appear to be floating in a sea sandwiched by brown bark-cloth below and above. This piece probably hints on the environmental degradation hazards of the face-masks we are wearing during this time. What becomes of them after use? Kawonawo and Bakawonawo are two other pieces showing figures masked up covered to the arms by what could appear as mist or water. These are probably the survivors of the pandemic, all gagged up and helpless. The craftsmanship on these works is on a high-level, an aspect that the artist has been well known for. For one who knows bark-cloth knows the material can easily tear but the artist sews it together with the tough rubber with a level of neatness that is mind-blowing. 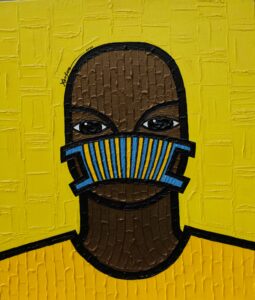 Upstairs in two rooms is where one finds the other works in the collection which are this time paintings. The acrylics on canvas work spot a well-controlled impasto technique which almost looks like the artist used a rectangular or square squeegee to apply the thick layers of paint. One wouldn’t think of a palette knife as the tool of choice here as it would be hard to achieve the intricate results. But whatever the case, the paintings are of bright colors mostly, with the artists signature cartoonish figures, thick black outlines. There is one titled Kaguta in two shades of yellows that catches my attention. Firstly, because Kaguta is the name of Uganda’s despotic ruler and his NRM party colors are yellow. Then I see another painting titled Ssentamu with a portrait of a man donning the opposition party’s uniform and cap. Kyagulanyi Ssentamu is the leader of the youthful opposition party that gave Uganda’s despot a run for their money the last bloody elections, which were organized when the pandemic was still looming around. The 70 x 60cm works, about 20-plus of them fill the two rooms of the upstairs part of the gallery. Another thumb up here goes to the artist’s team that ensures the works are presented to the viewer or collector in a well-finished manner. They are already framed with a black border just ready to meet your wall. 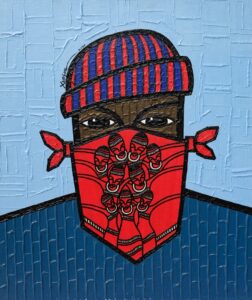 My only reservation however about the show is the small space within which the show was put. For an artist of Xenson’s magnitude, he would have shown this body of work in a much bigger space that not only accommodates the work but also bestows some sort of respect to his practice. The work seemed to have been squeezed into the small gallery and it was begging to breath. I also got information that all the works in the collection couldn’t fit in the space and thus were shelved away. One established artist at the opening mentioned to me that the National Theatre would be a just place for Xenson to put this show. However, one of the administrators at the gallery confided in me that since the collection had the aspect of timing as important to its showing, they didn’t have a lot of time to dissect issues of venue, the work had to go up to the public, lest it wouldn’t be so relevant next year or in the coming months. 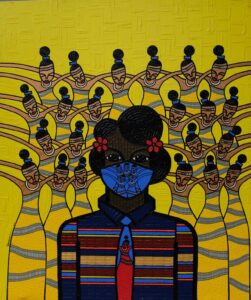 The work on show is clearly the artist’s response to the covid-19 pandemic. The artist is among the few that have veered away from their usual themes in their works to tackle an immediate issue. He relays in the catalogue under the exhibition brief that when he was going through his sketch book at the beginning of the pandemic, he found sketches of figures wearing masks which he couldn’t remember where the inspiration came from. But masks are not new in his work as his 2017 Gun Flower Mask exhibition explored humanity’s obsessive tendency to to hide behind facades, visible or invisible.

Xenson got interested in the irony of opposition youth who got locked up during the election period last December and January when other countries in the west were experiencing covid deaths. In his work on show, that which blocked the lungs from breathing could also be a metaphor to stand for gagging the state was involved in during the election period. If one opened their mouth to speak against Museveni’s dirty regime, they risked being killed. Maybe the pandemic in Uganda was a different one.

Matt Kayem is a contemporary artist, art critic and writer who lives and works in Kampala, Uganda. He can be reached on mattkayem@gamil.com.
Pictures: credit Xenson Art Space

← The Art and History of Kwanzaa