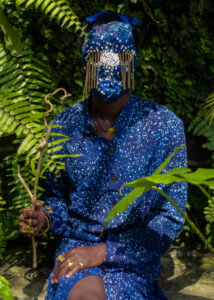 We aim to give our audiences a glimpse of the glamour and the politics of the African fashion scene. We hope that people come away with the view that African fashions are undefinable, always changing, always refusing to be pigeon-holed. We want audiences to come away inspired by the magnificence of African creativity and to want to find out more.

Christabel Johanson interviews the curator of Africa Fashion, till April 16 at V & A, London

Africa Fashion at the V&A

Featuring 20 countries and 45 designers Africa Fashion is a landmark show unlike anything before. It is the UK’s “most extensive exhibition of African fashions to date celebrating the vitality and innovation of this vibrant scene, as dynamic and varied as the continent itself”.
Containing 70 new acquisitions made by the museum, the total number of objects on display surpasses 250 items. Many of the garments hail from the personal collections of iconic African designers including Shade Thomas-Fahm, Chris Seydou,Kofi Ansah and Alphadi. The exhibition also includes film, photographs, catwalk footage, sketches and editorial spreads. This treasure trove of art showcases an Alphadi dress of cotton and brass as well as a specially commissioned design by Maison ArtC. 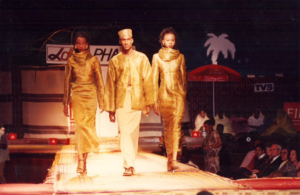 The exhibition begins with a silk and raffia piece by Imane Ayissi. The Cameroon-born designer is said to bridge contemporary with historical, both Africa as a continent alongside the “global Africa”. To this end there is also a section called African Cultural Renaissance to remind viewers of the political and social importance of the exhibit. From the mid-1950s until 1994 African liberation was happening, causing rippling waves of creative and artist change. As with many liberations, protests ran alongside artistic expression. Musicians, writers, artists were as much activists reflecting the collective feeling of change craved across the land.

This is also echoed in the Politics and Poetics of Cloth which concerns itself with the politicised symbolism of indigenous garments. In this section wax prints, adire kente and other examples of the textile traditions are on display. This also includes the commemorative cloth released in the early 1990s after Nelson Mandela’s liberation from house arrest.

Capturing Change houses photographs from the mid-late 20th century; a pivotal time in Africa where we see a nation on the cusp of agency, modernity and cosmopolitanism. Portraits include the works of Sanlé Sory, Michel Papami Kameni and Rachidi Bissiriou. This is just a taste of the many components to Africa Fashion which delves into so many varied styles and symbolic importance of the continent’s history. 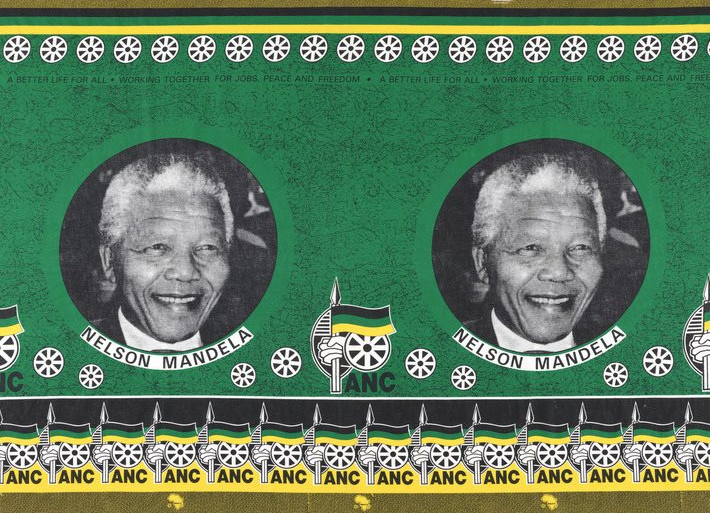 Senior curator Dr Christine Checinska adds that “Our guiding principle for Africa Fashion is the foregrounding of individual African voices and perspectives. The exhibition presents African fashions as a self-defining art form that reveals the richness and diversity of African histories and cultures”.

I spoke with Dr Checinska to learn more about the exhibition and the process of curating this unique show.

What was your inspiration for the Africa Fashion exhibition?

The work itself is the inspiration. Fashion creatives on the continent are leading the way in terms of cutting-edge global fashions. The designers, stylists, photographers and industry leads are creating such innovative and impactful work.
The exhibition is a timely and conscious celebration of the vitality and innovation of a selection of fashion creatives, exploring the work of the vanguard in the mid-twentieth century and the creatives at the heart of this influential contemporary scene. 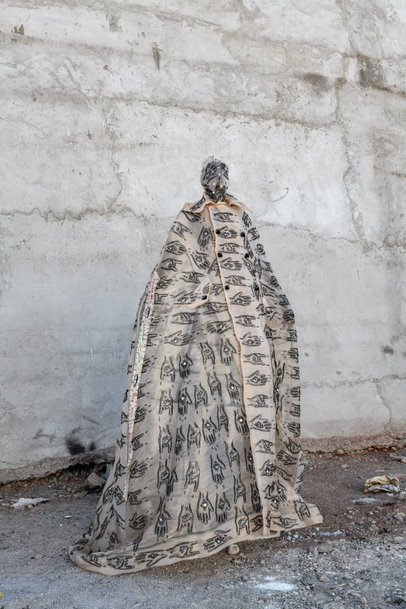 Can you talk us through your process whilst developing and curating it?

There are many ways in which to explore this inspirational scene – many ways to manifest an exhibition about it. We had a small curatorial team that included a freelance research consultant, Sunny Dolat. Centring Africa and representing multiple and varied African voices and perspectives was essential to our approach, all the while recognising the connections and disconnections between being on the continent and in the diaspora. The exhibition narrative was finessed through hundreds of conversations with the creatives in the show. We knew that we wanted to have a “corners of the continent” approach, one that blurred the old colonial boundaries and acknowledged the cosmopolitan nature of the continent. Over 45 designers from over 20 countries feature in the show. We knew that we wanted to tell a story of agency, abundance and unbounded creativity. This was our starting point.
This led us to examine the African independence and liberation years that sparked a radical social and political reordering across the continent. The exhibition explores how fashion, alongside music and the visual arts formed the bedrock of Africa’s cultural renaissance, laying the foundations for today’s fashion revolution.
During our research and development phase, we also met with international peers – fashion and textile scholars, practitioners, critics – alongside our Africa Fashion Co-Design Group of 16-24 year olds and our Community Focus panel. Expertise drawn from the wider ecosystem of departments across the museum – Exhibitions, Conservation, Photography, Learning, Interpretation, Technical Services – came together with external project staff in the telling of this story of African fashions. 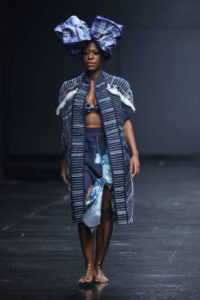 Which piece or pieces in the show were your favourite and why? Were there specific designers you felt you had to include?

It was important to include the light green organza grand boubou generously gifted to the museum by the late Professor Lalage Bown. Made in Dakar, Bown commissioned her grand boubou from a local tailor in 1966. For us it represents the work of the unknown tailors and dress makers who have always been an important part of the fashion systems found on the continent and amongst the diasporas. Bown wore the outfit several times, at the opening ceremony of the Second International Congress of Africanists, hosted by Senegalese President Léopold Senghor, and one or two of the receptions in 1966 and ’67.

The press release says that the exhibition “presents African fashions as a self-defining art form that reveals the richness and diversity of African histories and cultures”. Could you talk more on the self-defining aspect? Would you say that the fashion scene is less influenced by the Western world for example?

Fashion creatives on the continent are charting their own course and shifting our Global North understanding of fashion practice as they do so.

Do you think African fashion has been represented on the global stage yet or not?

The work of African heritage designers has been represented on the global stage for decades – think of Yves Saint Laurent, for example, who was born in Algiers, or Azzedine Alaïa, from Tunisia. Or today, think of Thebe Magugu. 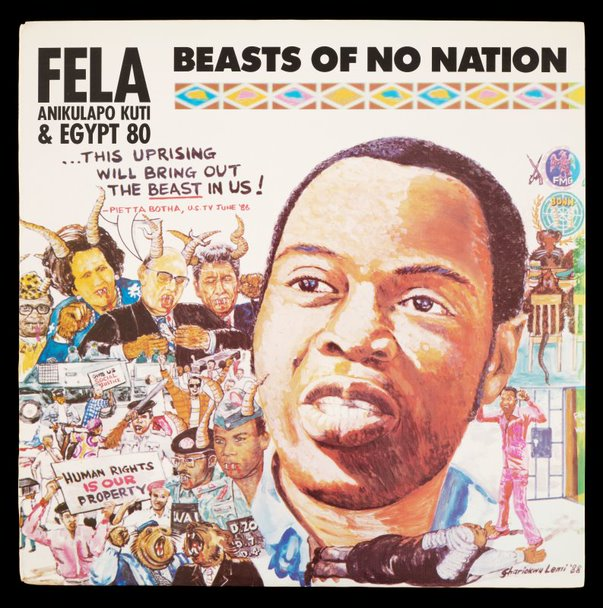 How do you want viewers to feel or go away thinking after they visit?

We aim to give our audiences a glimpse of the glamour and the politics of the African fashion scene. We hope that people come away with the view that African fashions are undefinable, always changing, always refusing to be pigeon-holed. We want audiences to come away inspired by the magnificence of African creativity and to want to find out more.

What important discussions would you like to come from this exhibition?

How can we build on what we have done through this first survey show? Can future projects begin with a broader vocabulary, a wider scope of reference points, a broader ‘we’ that begins with Africa whatever the topic or subject matter? We have many questions as a team, some of which were explored through the recent Africa fashion conference.

I see the exhibit as a celebration of the many textiles, patterns, colours, styles and geography of Africa. How do you feel about this?
We are aiming to give a glimpse of a fashion scene that is as diverse and varied as the continent itself. Africa Fashion consciously celebrates the irresistible creativity and unstoppable global impact of contemporary African fashions. My use of the word ‘consciously’ is deliberate. Like the lyrics in conscious music, our story is designed not only to inspire, but also to shake assumptions and expectations.

What is the next upcoming show we should keep our eyes peeled for?

The exhibition is an important part of the V&A’s ongoing commitment to focus on the work of African and African diaspora creatives. It lays the foundations for future projects as we continue to work collaboratively