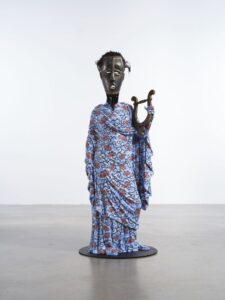 Shonibare created an exhibition where he wanted to show the spiritual and universal function of the African aesthetic. He created a stylised collection of works that he sought to find an historic discourse for without losing the trace of the abstract and literal interaction with western influences.

Themba Tsotsi writes about the work of Yinka Shonibare

Nigerian artist Yinka Shonibare had an exhibition at the Goodman Gallery, this was the second exhibition the artist had with the gallery in Cape Town, his first having been in Johannesburg in 2018. Shonibare was exhibiting for the first time in Africa in fifteen years, this is evident in the subjects this exhibition dealt with. It demonstrated that “Restitution of the Mind and Soul” was an exercise in rearticulating the African aesthetic as a strategy of creative reclamation and restoration of authenticity in relation to colonial perspectives.

The show featured African traditional masks with stylised finishes, this strategy demonstrated the measure for evolution of the African mask, the article will show this had an internal reference to the African aesthetic in a contemporary measure. The goal was to provide a contrast for the audience in terms if this evolution and how African aesthetic has remained dormant in the western imagination from the period of the modernist masters. It will show that the exhibition utilised western and African influences to evolve the dormant location the aesthetic occupies in contemporary art practice. Through the use of masks, the artist demonstrated a spiritual function of art. 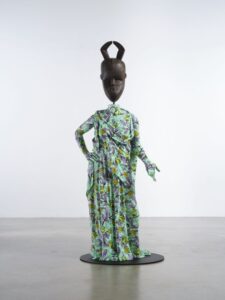 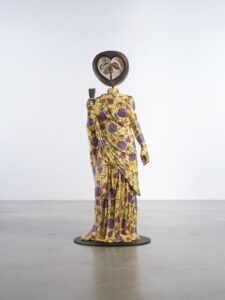 For example, Shonibare for some if the works was inspired by Picasso, Matisse and their collections of African and other indigenous community’s artefacts who acquired them during the end of the colonial period. An example is the “Hybrid Sculpture” collection that incorporates Greek mythology and African aesthetics. A glass fibre and wood sculptor, wrapped with hand painted Batik print finished with a mask titled “Persephone/Kwele mask” is an example of this evolution or a fusion of two influences. Shonibare is conscious of the diasporic location he occupies in relation to the modernist masters; Greek mythology and the seemingly peripheral place African aesthetics occupy in contemporary art practice. This functions as reclamation through its finish as African perspective. Hand painting the patterns enables the audience to experience how sculptor in African conception is conversation about the unconscious. Connection with Greek mythology pronounces the spiritual function of the work, but it also renders urgent how the aesthetic is stuck literary and abstractly in the contexts when modernists masters interacted with them for a western audience. 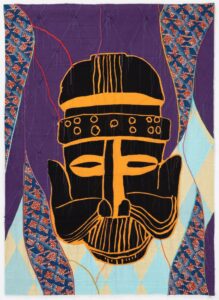 Shonibare also made fabric-based works, another strategy that overturns the extent to which a traditional art work is perceived in an African context and western context. Fabric is treated with painstaking detail and colour combination in Africa, that is is functional. In the western fabric has more commercial connotations. The piece titled “Modern Magic II” is another example of evolved aesthetic choices. Diamond pattern in the background of a macabre mask pattern finished with stylised detail. With this work fusion is not just a subject, it functions to combine contexts, to combine creative inspiration and through the social operation of masks in the African context affect the impact of art as spiritual function.

Another aspect of the exhibition where an evolution of the abstract and functional conception of African aesthetics relating to a western influence is through the painted masks collection. Titled “Hybrid masks” the artist created wood masks that have been hand painted, a strategy that imbues the piece with contemporary art implications more than traditional connotations. The work “Hybrid mask (Dogon)” has overt African influence from the Dogon people, with an elongated shape and rectangle eyes finished with yellow and green floral pattern, Shonibare emphasised aesthetic more than spiritual function with this piece. Since masks have a practical application that is abstract, these masks become a means to imbue the place of African aesthet-ic with universal connotations. The artist is conscious of the relegated space it has come to oc-cupy since the colonial period, he now infuses a conversation that was never lost, but hidden in the practical recesses of creatives and artists in the diaspora. 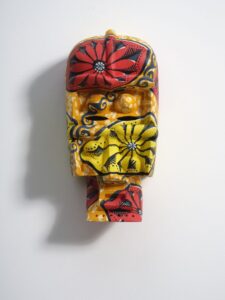 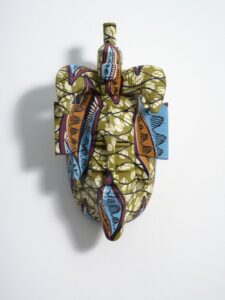 Shonibare also accessed images of the works from the 1920’s and 1930’s, the exhibition was also infused with another aspect that related the works to the function of the unconscious. That is the exhibition was also incorporated with the facet of the archive. The archive connotes both access and lack of access, in the exhibition lack of access impacted the relegated place of African aesthetics, Shonibare executed the purpose of retrieval and reclamation. The aspect of access as practical has become a means to silence the spiritual function of aesthetic based artefacts. The artist was involved in this exhibition with a strategy of reclaiming the abstract in the conceptual location that African aesthetics occupies in contemporary art practice.

Shonibare avoids the danger of fetishism in an exhibition of this nature, incorporating fabric is a strategy to avoid this. It enables abstraction to combine two influences. The diamond pattern in “Modern Magic III” is pronounced with an image of a sculpture with two limbs. In certain African cultures figures of this nature represent the spirit of a fetish or a fetish that is embodied by the particular form. He avoids that by rendering this figure on fabric, the impact is a piece in which the evolution of the aesthetic is pronounced. The diamond shape pattern that has west-ern influence articulate the synthesis between the artist ‘s creative goals and his own diasporic influences.

Shonibare created an exhibition where he wanted to show the spiritual and universal function of the African aesthetic. He created a stylised collection of works that he sought to find an historic discourse for without losing the trace of the abstract and literal interaction with western influences. The African aesthetic did not diminish, nor has it diminished throughout its history in the context of the diaspora. The title of the exhibition “Restitution of the Mind and Soul” captured those sentiments with a poignant voice of the diaspora, in an exhibition that relied on the history of creativity practise than on political history, Shonibare is an artist who is conscious of the arena that silenced the function of the aesthetic.