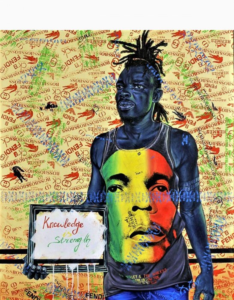 A recognized talent even before completing his Masters in Drawing and Painting from the Foumban Institute of Fine Arts in Cameroon in 2018, Anjel had the good fortune of being a 2016 artist-in-residence at the prestigious Les Ateliers Sahm in Brazzaville, Congo, where he was so fascinated by the city’s celebrated dandies that he began making these colorful characters the primary subjects of his vibrant paintings. 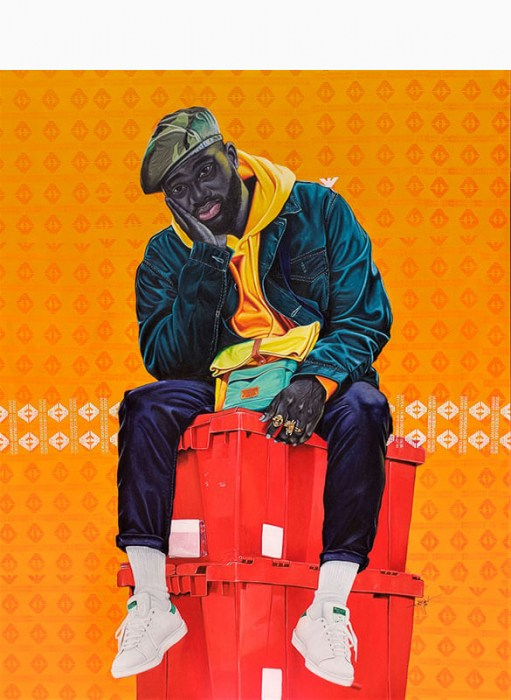 Having always been interested in figurative art—he started drawing characters from comic books when he was just nine years old and was the president of his secondary school’s art club when he was sixteen—Anjel became deeply interested in the history of art while at the university, where he had a teacher who taught him the importance of perseverance in his practice and consistency in his work—two invaluable lessons that he has put to great use.
Forever grateful to his cousin Samuel Njomke, a local artist who gave him his first drawing lessons, and the prominent Cameroonian artists Jean Jacques Kanté and Herve Youmbi, whose masterful uses of color and form continue to inspire, Anjel has achieved a sophisticated style of portrait painting, which packs a powerful punch. 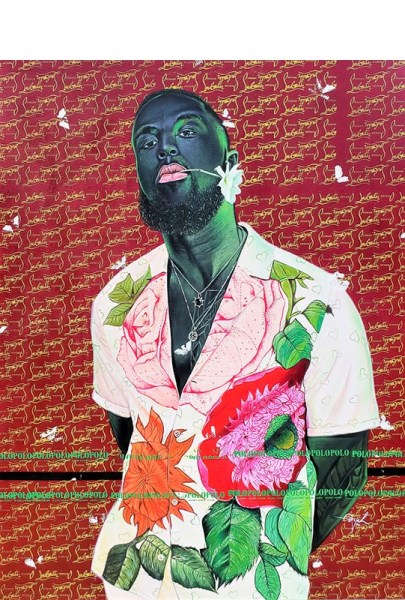 Creating a visual contrast between realistically rendered black bodies (both friends and figures found on social media sites and through Internet searches) and abstract, logo-loaded, colored grounds, Anjel makes Neo-Pop Art paintings that provide spirited insights into his stylish models, while simultaneously pointing out the pervasive influence of consumer culture.
Anjel was attracted to the Congolese dandies, who are known throughout Africa as sapeurs, for the way they mixed colors in their clothing. Followers of the Society of Ambianceurs and Elegant People (SAPE), they spend all of their money on fashion. Many of the flamboyant participants are simply posers, who are living in poverty, while others are gentlemen civil servants. Like a religion, it has its own rules, which must be followed in order to maintain the respect of the community, where they are treated like celebrities. Dating back to colonial times, when house boys were often paid with secondhand clothing, this mode of elegant attire has become a part of African heritage. 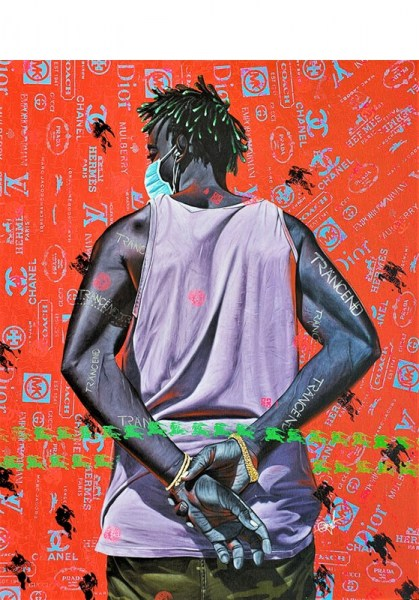 In his earlier paintings, Anjel filled the black bodies of his models with logos from famous fashion brands, including Fendi, Hermès, Kenzo, Polo and Versace, and gave the works clever titles, like Ego or sacrifice? and SAPE Jockey. In more recent works, however, like the canvases in his first solo show, “Black is Beautiful” at Barcelona’s OOA Gallery, which discovered his artistic talent and organized his initial European exhibition in 2017, Anjel paints black skin almost as though the subjects are drawn from black and white photos—with their lively lips, hair, hats and other accessories delivering dazzling colors—while portraying the figures on logo-layered backgrounds and keeping the witty titles, such as Shades of Pride.
Anjel’s African American friend, whom he met on social media, flashes a chic Instagram-ready pose in Shades of Pride and looks stylish yet forlorn sitting atop two bins that could be full of clothing in Highs and Lows. The painting Fraternity captures two shirtless, six-packed brothers, who the artist met through Afropunk (an international subculture that he draws upon for subjects), that are engulfed in Louis Vuitton logos. And in @frica is tomorrow, the communications director of ART X Lagos flaunts a hot-pink suit while surrounded by Polo and Versace insignias. 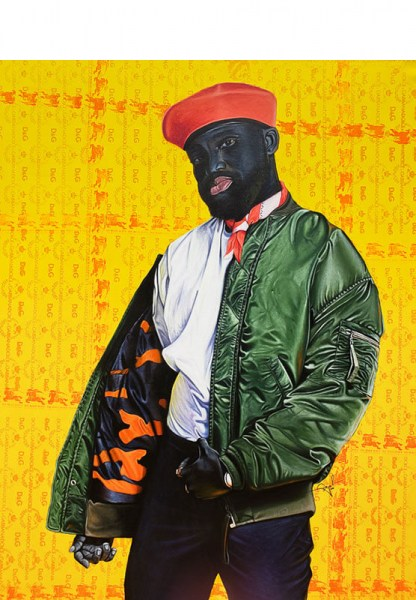 Turning his attention to voguish female dandies, Anjel depicts a tomboy skateboarding pal, who is also an activist, personal coach and motivational speaker, in street fashions and big hoop earrings, which he added to give her a hip hop appeal, against a bright background filled with all kinds of fashion brand motifs in the colorful canvas Black is Beautiful. Meanwhile, Sweet Cabata captures another Afropunk fan outfitted in radiant red and carrying a tiny Louboutin handbag, which makes this voluptuous female figure ironically resemble an exaggerated character straight out of a Fernando Botero painting.
In Strength is Within, one of the last paintings he made for the show, Anjel tackles two current social issues, the coronavirus pandemic and racial injustice. Illustrating a fashion designer that he met in Congo, the painting shows a black man wearing a surgical mask with his hands held together behind his back, as though they are bound. Anjel envelops him with popular logos to metaphorically protect him and adds the designer’s own fashion brand, which is ironically called Träncënd, like tattoos on his skin. In the subcultures of SAPE and Afropunk, cloths are weapons, which camouflage the status of the wearers, who parade their fashions with pride.
Highly informed about contemporary art, Anjel readily acknowledges the Pop culture influence of Andy Warhol—especially in his employment of silkscreen as a painterly technique—and his admiration for the way such painters as Tim Okamura, Fahamu Pecou, Amy Sherald and Kehinde Wiley treat the black body. Masterfully making his work uniquely his own, he conceptually plays with the content by adding metaphors and ideas that take the paintings beyond mere physical realism and into a magical realm.