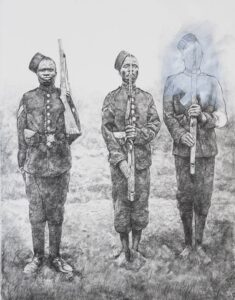 About:
Acknowledging an absence of representation over the past 100 years, the exhibition concentrates upon the contribution of Black servicemen and women to the British Armed Forces and war efforts from 1914 to the present day. It reflects upon contemporary British conflict alongside historical events of warfare involving Britain and the colonised nations of the British Empire. As the world commemorates the centenary of World War I, the body of work addresses the stories that remain largely untold.
Poignant and affecting, ‘Shock and Awe’ alludes to the physical and psychological impact of conflict, and on the often turbulent return to civilian life after war. Through the collection of large-scale drawings, Walker reflects upon the contributions of the British West Indies Regiment and the King’s African Rifles, among others, and addresses gender and the under-recognised role of servicewomen from the Caribbean and West India Regiments in World War II.
Shock and Awe was commissioned by mac birmingham and curated by Lynda Morris and Craig Ashley. It has been realised with support from the Herbert Art Gallery & Museum, The John Feeney Charitable Trust and Arts Council England. 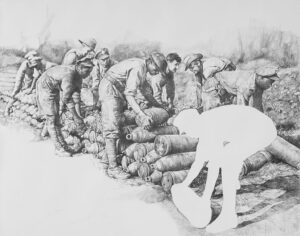 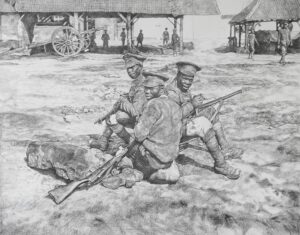 Barbara Walker is a British artist based in Birmingham in the UK. Her work is informed by the social, political and cultural realities that affect her life and the lives of those around her. Growing up in Birmingham, her experiences have directly shaped a practice concerned with issues of class and power, gender, race, representation and belonging. Her figurative drawings and paintings tell contemporary stories hinged on historical circumstances, making them universally understood and reflecting a human perspective on the state of affairs in her native Britain and elsewhere.
Referred to by the art historian Eddie Chambers as “one of the most talented, productive and committed artists of her generation”, Walker makes portraits in a range of media and formats, from small embossed works on paper to paintings on canvas and large-scale charcoal wall drawings. Her works depict subjects who are often cast as minorities, inviting the viewer to look beyond the anonymising act of categorising or classifying citizens. Her pictures make visible the lives of others, and address the allusions associated with the labels conferred upon people by society.
The issues of visibility and representation are central to Walker’s practice. She often references public archives to create works that effectively transfer visibility back to the subject, offering an alternative and balanced interpretation of a nation’s history. The narrative of national heritage, presented through public collections, is informed by acquisitions and the collecting rationale of privileged individuals throughout history; Walker works to disrupt these limited and often skewed standpoints, and through her pictures introduces opportunities for the contemporary viewer to consider other perspectives beyond that of the powerful institution. 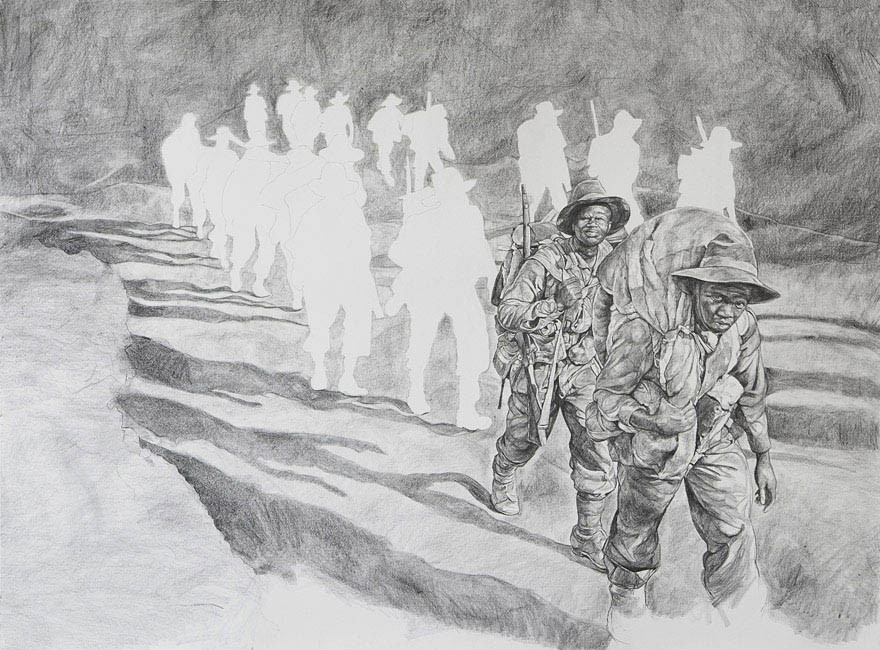 Walker’s recent solo exhibitions include Place, Space and who (2019) at Turner Contemporary, Vanishing Point at Jerwood Gallery (2018), Shock and Awe at Midlands Arts Centre (2016), Sub Urban at the James Hockey Gallery, part of the University for the Creative Arts in Farnham (2015) and As Seen at Tiwani Contemporary, London, (2013) Her works have been included in significant group exhibitions in the UK and internationally; exhibitions including Summer Show, Royal Academy of Arts (2019), Protest and Remembrance, Alan Cristea Gallery ( 2019), Zeichen, MEWO Kunsthalle, Memmingen ( 2018), Diaspora Pavilion,57th Venice Biennale (2017), A Slice Through the World: Contemporary Artists’ Drawings, Modern Art Oxford (2018) and The Gallery of Small Things, Dakar Biennale, Senegal (2018). 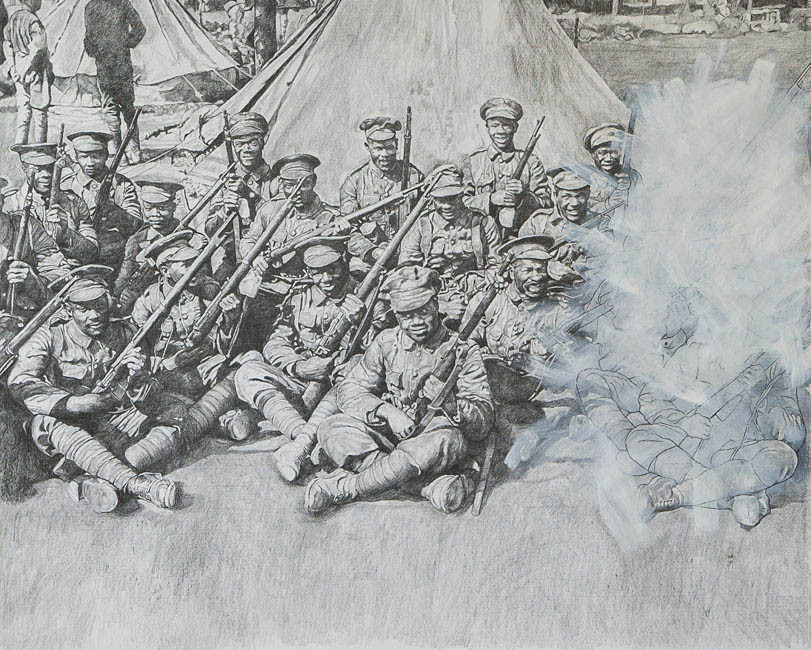 She has worked on a large commission for Facebook London Head quarters and other public art projects. Her work is held in private and public collections including Birmingham Museum & Art Gallery, The Herbert Art Gallery, Arts Council Collection, Yale Center for British Art, Government Art Collections, The British Museum and US Embassy London.
She has been awarded the 2020 Bridget Riley Fellowship at The British School at Rome and received the inaugural Evelyn Williams Drawing Award in 2017, in association with the Jerwood Charitable Foundation. Walker was awarded an MBE in the 2019 New Year Honours for services to British Art.
Current and forthcoming projects:
Place, Space and Who, Turner Contemporary, Margate, UK, 12th April – 6 September 2020
Bridget Riley Fellowship 2020, British School of Rome, Italy