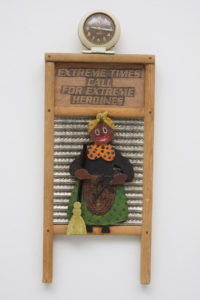 About: (text was guiding her solo last year in The Craft & Folk Art Museum in Los Angeles)

Betye Saar: Keepin’ It Clean, a solo presentation of the seminal contemporary artist’s washboard assemblage sculptures, which she began in the late 1990s and continues to make to this day. Born in 1926, Saar is a prolific artist and iconic figure of the Black Arts Movement of the 1970s, whose complex assemblage sculptures address race, memory, and Black consciousness. Curated in close collaboration with the artist, the exhibition presents twenty-four new and historic works that center the washboard as a symbol of the unresolved legacy of slavery and the subsequent oppressive systems facing Black Americans today, particularly Black women. Saar’s renewed focus on making washboard assemblages stands as an urgent act of cleansing the race- and gender-based violence that American society continues to inflict. In Saar’s own words, “the increase of police shootings and the Black Lives Matter protests are examples that America has not yet cleaned up her act.” 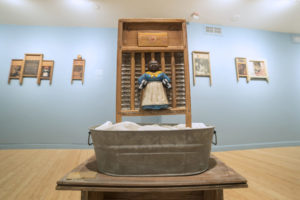 Saar commonly utilizes racialized, derogatory images of Black Americans in her art as political and social devices. The Liberation of Aunt Jemima (1972) is Saar’s most well-known art work, which transformed the stereotypical, nurturing mammy into a militant warrior with a gun. Aunt Jemima continues to be a reference point for Saar even now, as she brings her back to life to take on the ongoing racial injustices faced by Black America, including disproportionate police violence and poverty. Combining images of mammies and laundresses with potent words from spirituals and poetry within the washboard structure, Saar emboldens and ennobles the once subservient figure-no longer in service of white supremacy. 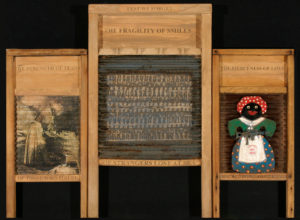 Lest We Forget The Strength of Tears The Fragility of Smiles The Fierceness of Love, 1998.

“Betye Saar’s washboard assemblages are a brilliant in how they address the ongoing, multidimensional issues surrounding race, gender, and class in America,” says exhibition curator Holly Jerger. “She compresses these enormous, complex concerns into intimate works that speak on both a personal and political level. With the increasing erosion of civil rights in our country, it is more important than ever to exhibit Saar’s work, and we are deeply honored to have that opportunity.” 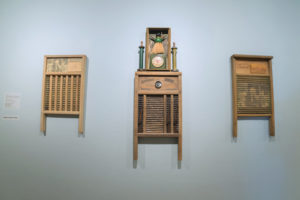 “I wanted to do an exhibition of my washboards because they are intimate and hands-on,” says Saar. “It’s a body of work that I am still making, and the new works are inspired by the Black Lives Matter movement. People think racism happens everywhere else, but racism still exists in Los Angeles.” 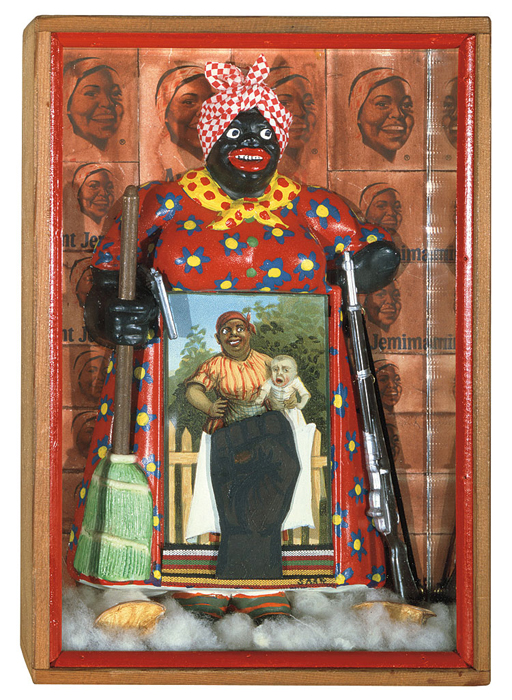 Bars of soap, worn with age and use, are collaged onto works such as National Racism: We Was Mostly ‘Bout Survival (1997) and Gonna Lay Down My Burden (1998), with the slogan “Liberate Aunt Jemima” pasted onto them. Several washboards have the words “We was mostly ‘bout survival” embellished onto them, as well as “Extreme times call for extreme heroines.” Clocks have become an integral part of Saar’s more recent washboards, indicating that history continues to repeat itself, especially as the current political administration normalizes racist, sexist, and xenophobic rhetoric. Recent works such as Birth of the Blues (2015) and Banjo Boy (2015) include male musicians as central 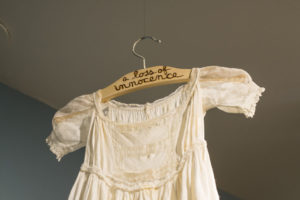 Dark Times, mixed media on vintage washboard, 2015. Courtesy of the artist and Roberts & Tilton, Los Angeles, CA figures, alluding to the young black men and boys being killed by police violence. To give deeper context to the washboard assemblages, two related tableaux and a selection of washboards from Saar’s personal collection are also included in the exhibition.(Courtesy Roberts projects)